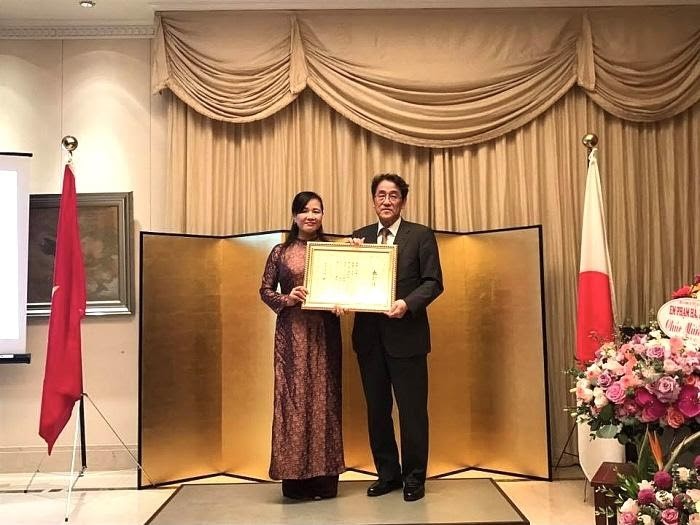 Cultural diplomacy strategies and why they are important

Interview by Frank Tu, ICRP | Cultural diplomacy strategies and why they are important

Assoc. Prof., Dr. Ngo Minh Thuy is currently the President and Director of the Interdisciplinary Institute for Culture, Language, and Education Fostering (CLEF). She has held multiple leadership positions in higher education and Vietnam-Japan diplomatic relations, working as Vice President of the University of Languages and International Studies of the Vietnam National University, Vice President of the Vietnam-Japan Friendship Association, and Chairwoman of the Vietnam Association of Japan Alumni, among other roles. In 2019, Professor Thuy received a Certificate of Honor from Japan’s Ministry of Foreign Affairs for her contributions to strengthening the relationship between the two countries.

Thank you very much for agreeing to do this interview with me, Professor. I would like to begin by asking when and why you decided to devote yourself to Vietnam-Japan relations?

My unexpected connection with Japan started in 1990, when I was undergoing training in Moscow as a Russian language teacher of the Vietnam National University (VNU). There, I met my very first Japanese friends, who left a very good impression on me. At that time, I never thought I would ever go to Japan. However, after the collapse of the Soviet Union, Russia started to lose influence in Vietnam, and the VNU decided to delegate some faculty members who could speak English well to Japan. These delegates would later come back to help develop Vietnam-Japan relations. Thus, the decision to go to Japan was not mine. I guess that must have been fate.

I am very curious about what you have just shared. Why do you think Vietnam decided to focus on Japan after the collapse of the Soviet Union?

Vietnam and Japan began to have official diplomatic relations in 1973. Since then, the two countries have gone through many ups and downs. Especially, our relationship was quite ‘frosty’ during the period when Vietnam was sanctioned economically after 1979-1980. At that time, our partners were mainly the Socialist Bloc Eastern European countries. After the collapse of the Soviet Union, the Vietnamese government decided to tighten our diplomatic relations with other nations, including Japan – a country that has geographic proximity to Vietnam and entailed plenty of opportunities and potentials for our development.

You mentioned that Japan entails plenty of opportunities and potentials for Vietnam’s development. What do you think Vietnam can benefit from a strong relationship with Japan?

In Vietnam, we often say “more friends, fewer enemies”. That is why it is important to have Japan as a friend. Besides, there are some specific benefits that both countries can get out of a good bilateral relationship.

First, we are important business partners. Vietnam can attract more investment to build infrastructure and grow GDP. On the other hand, Japan is an exporting country that wants to expand its foreign markets. Besides, we are also political allies in dealing with global and regional issues.

Regarding human resources, we can improve the skills of our talents by cooperating with Japan. I believe if Vietnamese people work with a more advanced country like Japan, we will learn a lot. Moreover, as Japan is facing the serious challenge of population aging, they can also benefit from our dynamic workforce.

In terms of education, since many Vietnamese youths are studying in Japan, our younger generations now have access to modern education and cutting-edge knowledge. We are also benefiting from technology transfer through joint projects with Japanese companies in Vietnam.

Finally, with regard to culture, I believe Vietnam and Japan harmonize and complement each other. For instance, Japanese people tend to overprepare while Vietnamese people could be overly positive. If both sides are too detail-oriented, it might hamper a productive partnership. On the other hand, if both are overly positive, the quality of cooperation will not be high.

At the moment, along with security and economy, cultural diplomacy is the third pillar of Vietnam’s foreign policy. Could you please share with us some particular cultural diplomacy strategies you have employed to strengthen Vietnam-Japan relations?

Cultural diplomacy is a very broad domain. It involves cultural exchange events, through which our two peoples will develop a love and respect for each other. Second, there are art activities such as music festivals, art exhibitions, and so forth. Third, it involves literary activities such as translating books or publishing articles. Fourth, another way is to promote each country to the other’s public through special TV shows and documentaries in different media networks. Fifth, tourism can connect the two countries. Sixth, education plays an important role in fostering cultural understanding. And seventh, cultural influence can also be indirectly enhanced through other types of cooperation. For instance, through economic cooperation, Japanese companies will learn about Vietnam’s business and diplomatic culture. In such activities, individuals act as ambassadors for their respective countries and promote their own cultural values.

Personally, I am fortunate to have participated in many of such projects. I have acted as both delegate and host in cultural exchange events. I have also joined several TV interviews to introduce the Japanese culture to the Vietnamese public. Besides, I have worked with the Embassy of Japan and offered suggestions to develop Vietnam-Japan relations. Regarding education, I was a co-president of the Kyoto University – Vietnam National University Cooperation Office, which was one of the only eight overseas offices of Japan’s Ministry of Education. In 2003, I was in charge of developing a curriculum to teach Japanese in high schools and have co-authored 34 Japanese textbooks. Together with my colleagues, I have also sent many Vietnamese students to Japan and welcomed Japanese students to Vietnam.

People often say that culture and education are a type of soft power. In your opinion, has Vietnam’s cultural diplomacy rendered the country more powerful?

Judging from how Vietnam is portrayed in mass media nowadays, I do believe that Vietnam has become more powerful, much more powerful indeed. In the past, many countries did not know of Vietnam, even in countries that had official diplomatic ties with us. For instance, it seemed to me that the Japanese public did not know much about Vietnam when I was studying there in 1997. Oftentimes, news channels would show images of Vietnam’s destitute rural areas, images of an obsolete and undeveloped Vietnam. However, through cultural diplomacy, the Japanese people now have lots of accurate information about us. As foreign countries now know about the real Vietnam, I would say that Vietnam has become more powerful.

Besides, Vietnam is now an important, trusted, and strategic partner of Japan – the third most powerful economy in the world. I believe our two countries’ strong relationship also indicates the importance and influence of Vietnam on the world stage. On the other hand, the bond between Vietnam and Japan has also amplified our power.

Thank you very much for the answer. What do you think are the next tasks that Vietnam needs to do in order to build on progress already made?

In terms of the economy, I think we are moving in the right direction. Japan has been increasing investment and has also established dozens of companies and economic institutions in Vietnam. From a macro perspective, I believe the Vietnamese government needs to further improve our business environment so that both Vietnamese and Japanese companies can thrive.

Regarding culture, there should be more cultural events. Currently, there is only one official Vietnamese festival held in Japan annually, but I think we should go further than that. As for education, we need to welcome more Japanese students to Vietnam. Besides, we also need to be aware of the ramifications that “a portion” of Vietnamese technical intern trainees have unfortunately caused to our diplomatic endeavors. These are only some “bad apples”, but they might have a negative impact on the image of Vietnamese students in Japan as a whole.

Are there particular actions that you would want Japan to take to further enhance Vietnam-Japan relations through culture and education? 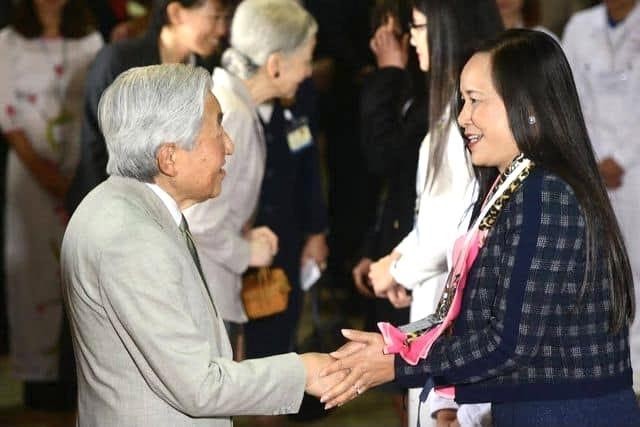 Next, I would like to ask a normative question. What are some special characteristics about the Japanese culture that you think we should consider, or even learn from? And, are there any aspects of the Vietnamese culture that you would want other countries to know about?

Every nation has things that they can be proud of. I think Japan has cultural values that we should consider, or even learn from. First, it is their “humility”. Japanese people are very humble, even those in powerful positions act in a very humble manner. Second, it is their dedication to work. Japanese people are not only dedicated, but also meticulous and highly organized. Third, they honor promises and the trust that others place in them.

On the other hand, Vietnam also has values that I am proud of and would like to share with other countries. First, it is our hospitality, which is perfectly manifested through our saying “you can stay hungry, but you have to treat your guests well”. When you visit a poor farm family, even if they have only 2 – 3 chickens they would still try to prepare a good meal for you. Second, Vietnamese people are highly positive. Maybe that is why Vietnam has a very high happiness index. Third, Vietnamese people are forgiving. History has shown that Vietnam was willing to forgive and make amends with colonizers such as France, the US, or even Japan.

Currently, you are the President of the Interdisciplinary Institute for Culture, Language and Education Fostering (CLEF). Could you please talk about some main activities of CLEF?

CLEF is affiliated to the Vietnam Union of Science and Technology Asociations and has been granted an operation permit by the Ministry of Science and Technology to conduct development research. CLEF focuses on three directions. First, we create a network and bring together dedicated experts, scholars, and public managers to research matters related to culture, language and education. We also assist students, doctoral candidates and junior researchers in conducting research and publishing articles. Second, we seek to foster cultural understanding between nations. Finally, we organize workshops and seminars. We have special training programs in translation, HR, diplomatic manners, cultural understanding, and so forth.

Finally, leaders and particularly cultural leaders often care about their “legacy”. Do you care about your legacy, and are you satisfied with what you have done thus far?

I do not think of myself much as a leader. Yes, I have acted as a higher education leader and as president in several organizations, but in many other cases I was a partner. I could never have done much without the support of my colleagues. Although my contributions were small, I am glad to have played a role in strengthening the relationship between Vietnam and Japan. Moreover, I have always found a way to influence policy agenda-setting, and I am glad that some policies have moved in the direction that I hoped they would. I am also proud of having educated generations of students who are motivated by not only materialistic values. So, I am pleased with what I have done, but I do not think too much about my personal legacy.

Prof. Thuy has granted the author the right to use the photos.