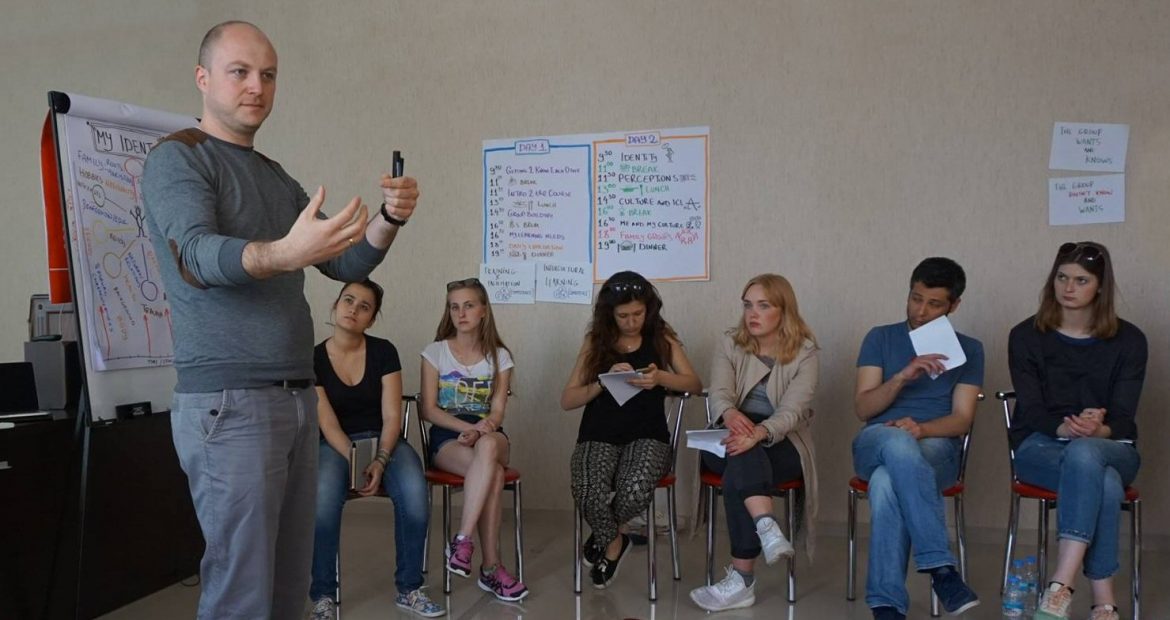 EYCB.EU | Training course Facilitate Learning Among Cultures brought together group of 28 young people from Europe and Caucasus countries to small village called Misaktsieli, not far away from capital of Georgia – Tbilisi. There were 2 participants from each country – Azerbaijan, Belarus, Czech Republic, Denmark, Georgia, Greece, Hungary, Italy, Lithuania, Moldova, Poland, Slovenia, Turkey and Ukraine. There were two trainers, who were responsible for the program, 2 members of Hungarian organization “ICRP”, which came up with this project and 1 Georgian, who helped with logistics and local issues. Project took place in a hotel on the outskirts of the village and lasted for 8 days.

Main aim of the project was to give us useful information how to facilitate training course with intercultural participants and we had opportunity to facilitate sessions in small groups. Every part of the program was well prepared and was linked to real life examples as much as possible. We were discussing many particular situations, which helped us a lot with dealing with those situations in future.

Day started with breakfast and then the first session took place. We we’re having a short 20-30 minutes long coffee breaks during morning session. After lunch we had some free time for relaxing, walk to the village or just doing whatever we wanted. Afternoon sessions were also divided by short coffee break and after dinner we had free time. We were playing some board games, billiard or dancing and having fun. When the weather was great, we went out to enjoy the beauty of this amazing country and also some of sessions took place outdoors.

First day we met each other in Tbilisi in a Freedom square and we went to Misaktsieli by private bus. We came to a hotel in the evening and after checking in we had some free time. After dinner, we had „welcome party“ where we played few ice.breaking games and tried to remember as much names as possible. Second day was dedicated to ice-breaking and team-building activities. We were playing many games to get to know each other as soon as possible and it helped us a lot. During other sessions we were discussing, what is culture, what dimension culture has and so on. During first days after dinner we had intercultural evenings, where we could taste something typical and learn something new about different cultures and countries. Later trainers taught us, how to facilitate sessions and training course, they gave us a lot of useful information how to motivate participants, how to be great trainer and leader. We had also free afternoon during the forth day and we went to Tbilisi, where we spent nice time by walking around. We went to the hill close to city centre and we could see whole city; main square, local baths and restaurants. During the last days we were divided into 10 small groups and prepared our own sessions for others. We also got valuable feedback and we learned how to give feedback as well. It was really great experience and we learned a lot through this process.

We also created “families” and we’re having family meeting every day, where we were discussing, what we liked, what was difficult, what did we want to practice more and were just sharing our feelings about the day. One of last day we had Georgian traditional dinner called supra, where we could taste a lot of typical food and wine, during that dinner Georgian dancers had performance for us and a lot of toast were said. It was absolutely amazing!

We spent really amazing 8 days in Georgia, I would like to thank a lot all the organizers for such a great project. Thanks to many activities we became perfect group of young people, who wanted to inspire others and who were open to learn from each other. We had good time, some of us forgot about their everyday problems. We learned a lot and found a lot of new friends, for many of us partners for future cooperation. I would like to thank also to EYCB, that allowed me to go on that project! Thanks to all!