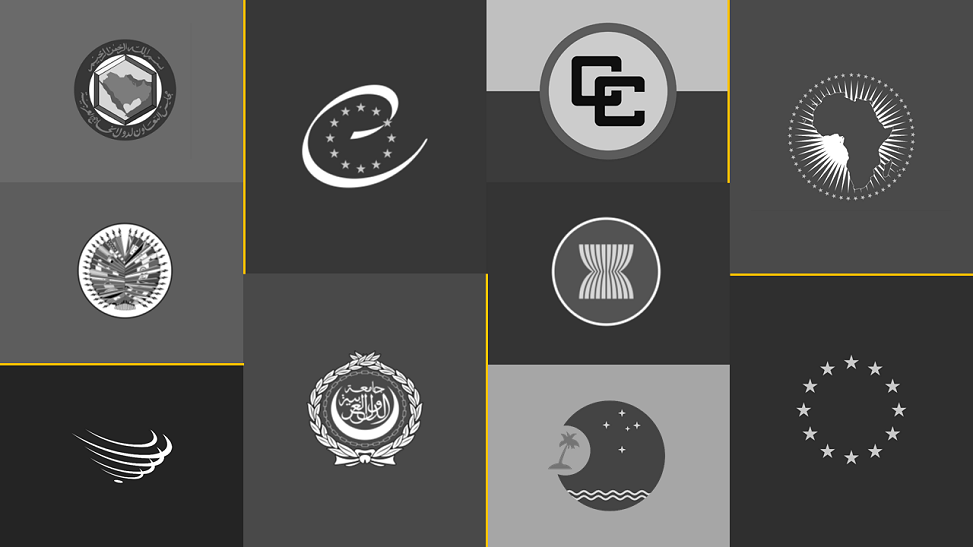 The 10 most important international organisation

The list below comprises of the ten most important international organisations. These regional organisations comprise of member countries which chose to unite their capacities to some extent in order to prevail their policies in a more secure international environment that enables economic viability. This list of the most dominant regional integrations contains information about their foundations, aims and member states.

When creating this list, we intended to display here those ten international organisations which future goals, internal and external actions and soft power results in the biggest impact on peaceful international relations and economic development. The list does not reflect any political opinion of the authors.

The League of Arab States – mostly mentioned as the Arab League- is a regional organization for states with Arab majority population. After the Alexandria protocol in 1944, the organization was founded in 1945, Cairo by seven states: Egypt, Iraq, Lebanon, Saudi Arabia, Syria, Transjordan and Yemen. Today, the organization counts 22 members. The League is based on the common language, religion and culture, but sometimes they are also involved in the same conflicts, like in the case of the Israeli Independence in 1948 or the Suez Crisis in 1956. The organisation’s main goals are to improve their political, economic and cultural cooperation and to maintain and develop relations between the member states.  In 1962, they created the Council of Arab Economic Unity and a little later the Arab Common Market was founded. The General Secretariat and the 3 different councils are leading the organization and negotiate about every important international issue. The League is often divided, because the radical and conservative views are facing each other. Besides that, none of the member states could get an absolute leading position. The biggest success of the organisation was stopping the Iraqi forces in Kuwait in 1961. However, the Arab League also had failures in the past: for instance, in Tunisia (1958), Lebanon (1958), Jordan (1958 and 1960), Syria (1962), Yemen (1962-67) and Kuwait (1990).  In conclusion, the Arab League is more efficient in economic and cultural missions, than in political, because of the diversity of the member states.

The OAS was founded in 1890, so this is the oldest regional intergovernmental organization.  Firstly, the organization had the “International Union of American Republics” name, then the “Pan American Union”, but in 1945, after a long process of negotiation the final decision was the name we know today: “Organization of American States.” The headquarters are in Washington and the 35 member states share democracy, human rights, security, and development as common main pillars in the organization. The most important governing body in the Organization of American States is the General Assembly, where every member state has one vote. The organization does political, economic, social and cultural activities, but these are often under the influence of the United States. This was dominant especially during the Cold War, for example the resolution of common actions against the spreading communism in 1954 or the exclusion of Cuba in 1962. The OAS plays an outstanding role in the maintenance of peace and safety on the American continent. The most successfully solved conflicts were between Costa Rica and Nicaragua (1948-49, 1955-56, 1959), Honduras and Nicaragua (1957), Venezuela and Cuba (1963-64, 1967), the Dominican Republic and Haiti (1950, 1963-65), Venezuela and the Dominican Republic (1960-61), and finally, Panama and the USA (1964).  The motto of the organization is: “Democracy for peace, security, and development”.

The ASEAN was one of the first bigger independent regional organizations in Asia. It was founded by the Philippines, Indonesia, Malaysia, Singapore and Thailand in 1967. Today, the organization counts 10 member states and 2 observers. As China and India are not members, Singapore is the most outstanding member state, because it’s strong economy. The ASEAN is governed with yearly held summits. Besides that, in the remaining time, the Committee of Permanent Representatives is responsible for this task.  The association’s main goals are accelerating economic development, maintaining social and cultural cooperation, strengthening regional peace and working together even more international and regional organizations in the future. However, the ASEAN is basically an attempt to a Southeast Asian common market. The motto of ASEAN is: “One Vision, One Identity, One Community”.  After the Vietnam war, the USA wanted to create a military function for the organization, but this attempt was not successful, because the member states preferred to stay neutral and non-aligned. In 1995, the member states of ASEAN agreed on creating a nuclear-weapon-free zone. After all, we can say that the ASEAN is a remarkable regional organization, but the fact, that the most definitive Asian countries (like China, India, Japan or South-Korea) are not members, makes the organization less effective.

The African Union was created in 2002, as the replacement of the Organisation of African Unity, which was founded in 1963. The AU has 55 members. During its existence, the organization had to suspend several state’s membership, because the membership fees were not paid appropriately. The African Union does a wide range of activities. Its main mission is the furtherance of solidarity and unity between the member states, the protection of sovereignty, the abolition of every form of colonization, the promotion of economic, cultural, educational and international cooperation. The AU also determined 16 principles based on these goals. The supreme body of the organization is the Assembly. The Executive Council helps the work of the Assembly. The essential decisions are voted by a two-thirds majority, in procedural questions, the simple majority is enough. The AU has a court too (African Court of Justice), which was created about the example of Court of Justice of the European Union. The organisation has 6 more organs: the Commission, the Pan-African Parliament, the Economic, Social and Cultural Council, Financial Institutions, Peace and Security Council, and Specialised Agencies and Institutions. The organisation has to deal with numerous current issues, for instance: AIDS, starvation, corruption or regional conflicts. The African Union also suffers from inefficiency and can show only few successes. However, the AU is still the most successful regional organisation in the continent.

The European Union is definitely the most famous regional organization in the world. When we talk about its history, we should mention the establishment of the European Coal and Steel Community in 1951, which was the first organization with an institutional structure like the EU has today. The member states also gave a legal personality to the organization. In 1955, the Benelux memorandum declared that the economic integration is more important than the political. Based on this ideology, the European Economic Community was founded in 1957. In 1992, the member states of ECC signed the Maastricht treaty about the establishment of the European Union. It entered into force in 1993. The capital of the organization is in Brussels and it has 27 member states at the moment. The EU has a common currency -the Euro- which is used in 19 member states. The EU members also share the same policies about visas, and they have common foreign policy and security policy. The EU had three pillars: 1. The European Communities, 2. Common Foreign and Security Policy, 3. Justice and Home Affairs. These pillars were abandoned in 2009 with the Lisbon treaty, when the EU was declared as a consolidated legal personality. The Treaty of Amsterdam in 1997, a lot of reforms were made in connection with freedom, security and justice. The Schengen Agreement also was incorporated into European Union law here.  The EU has 15 organs/institutions. On 31 January 2020, the United Kingdom became the first member state to leave the EU. However, the European Union is still one of the most successful regional organizations.

The USAN is a South American regional organisation founded in 2008, for the example of the European Union. The centre of the union was in Quito, the parliament is in Cochabamba and the Bank of South is in Caracas. The goal of the union was to build a South American identity and citizenship, to develop regional integration and to maintain economic, cultural and social cooperation. However, the USAN could not achieve its objectives. In 2012, Paraguay was suspended because some member states shared the view that after the Paraguayan elections a “constitutional coup” happened. Later, in 2017, there were conflicts about the leadership of the union: Venezuela, Suriname and Bolivia blocked the nomination of the Argentine diplomat. In the same year, Argentina, Brazil, Chile, Colombia, Paraguay and Peru joined the Lima Group, which rejects the Venezuelan government of Maduro. In 2018, 6 member states left the organization (Argentina, Brazil, Chile, Colombia, Paraguay and Peru) because they found it unorganised and dysfunctional. One year later, Brazil and Ecuador also left the organisation. They both joined an initiative called “Prosur” instead. Today, the USAN counts only 4 members: Bolivia, Guyana, Suriname and Venezuela. Due to the regional conflicts and diversity of political ideologies among the member states, the union could never be as successful as it was initially planned.

After the continuous conflicts in the Persian Gulf, the need of a regional cooperation became obvious. In 1981 Bahrain, Kuwait, Oman, Qatar, Saudi Arabia and the United Arab Emirates founded the Cooperation Council for the Arab States of the Gulf, also known as Gulf Cooperation Council in Abu Dhabi. Iraq and Iran are not member states, but in materialistic powers, the two countries overcome the GCC. The organisation has three main organs: The Supreme Council, The Ministerial Council and the Secretariat General. The GCC is active in the fields of economy, safety, media, legal and judicial issues, human and environmental cooperation and political affairs. The GCC also has its own military arm, the “Peninsula Shield Force”, formed in 1984. The organization’s economic activities are also remarkable, for example, the member states cooperate in the fight against harmful practices in international trade. The GCC also set goals like a Customs union, common market or a common currency called “Khaleeji”, but these plans are being realized very slowly.

The CARICOM is an organization based on the cultural, economic, social and political cooperation between the states of the Caribbean. It replaced the Caribbean Free Trade Association in 1973. The CARICOM has 15 full members and 5 associate members. The organization has 29 institutions and the headquarters are in Georgetown, Guyana.  Its principal organs are the Conference of Heads of Government and the Community Council of Ministers. The main fields of cooperation are agriculture, education, energy, mining and natural resources, financial and foreign affairs, science and technology, tourism, transport and the environment. The CARICOM also organizes projects and initiatives in order to work together effectively.

This regional organisation was founded in 1971 under the name of “South Pacific Forum”, but it was renamed in 1999.  It comprises 18 member states and its main goals are maintaining peace, harmony, security, social inclusion and prosperity. The Pacific Islands Forum’s most recent projects concentrate on air transport cooperation, fishery, energy, trade and economic integration, climate change, information and communication technology, health and education. The coral atoll nations also get special attention. The headquarters of the forum are in Fiji. The most dominant member states are Australia and New Zealand. Based on this fact, these two members are donating significant aids, provide a huge market for the other member states’ export products and take notable part in regional peacekeeping.