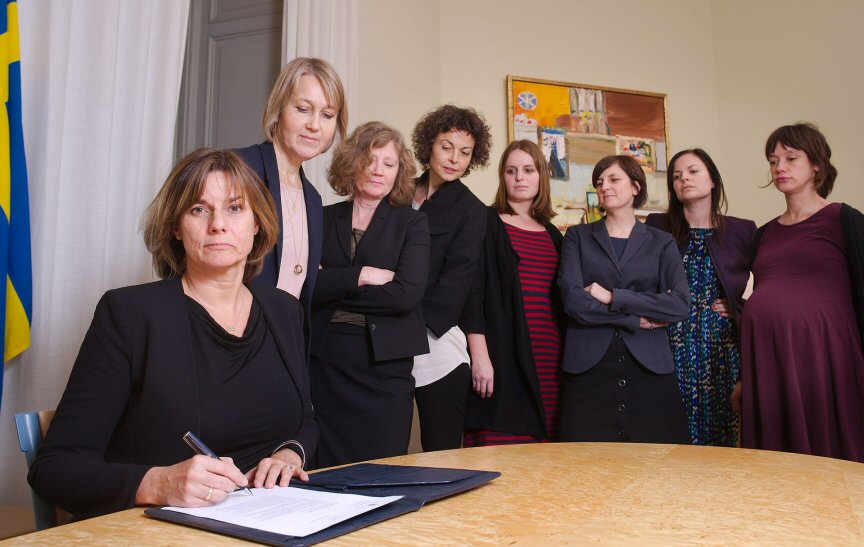 The role of women in politics

In 2014, Margot Wallström, then Swedish foreign minister, announced that the country was going to adopt a “feminist foreign policy”. What seemed surprising then have been followed by other countries: though most of the world knew little about how feminist policies could play out in practice, Canada, France, Luxembourg and many other countries have pledged to incorporate elements in their policy to promote gender equality. But what exactly is a feminist policy? Is it any effective? What does data suggest?

Six years later, in 2020, amidst the global pandemic caused by SARS-CoV-2 (known as COVID-19), trends show that countries lead by women – New Zealand, Germany, Taiwan or the Nordic countries – have performed rather well and thus stand as examples to the world. On the contrary, countries with traditional “strongmen” leaders standing on the other side of the ideological spectrum – US, Brazil, Turkey – are in turmoil. Consequently, the question arises: to have women running the country is to have greater policy quality, efficiency and stability? Do traditionally feminine attributes and traits – conflict resolution, pacificity, tactfulness, caringness, etc. – translate into better policies or are we looking at something closer to a coincidence? By analysing pre-existing theoretical and empirical contributions, unpacking contemporary debates concerning the role of women in politics and introducing examples, this blog entry attempts to investigate and critically assess what female leadership entails in contemporary policymaking.

The feminist strands of social sciences are relatively new-born; though they have roots in the historic struggle of women against invisibility and subordination, they emerged from the late 80s onwards. Although theories across and even within different disciplines differ in terms of normative, political and epistemological foundations – feminism in general intends to introduce a gendered approach to the various disciplines in order to understand how the status quo is being produced and reproduced in our society. In her renown piece, Cynthia Enlo asked: “Where are the women?” Well, the answer, even in 2020, is that despite gender equality measures have been taken in large number since the middle of the 20th century, women today still suffer from being marginalized in most, if not all countries. Recently, the issue of women being under-represented in politics and discriminated in the wider society has become high profile, however, substantial improvement is yet to come. Today, only 22 countries have a female leader and women are under-represented in most, if not all cabinets thus are more or less excluded from policymaking.

The most relevant debate arising in this regard is whether increased female representation leads to tokenism. The debate is pre-empted in the fact that countries most frequently resort to quotas when they want to increase female political representation. However, several independent studies (Besley et al, 2017; Folke & Richner, 2016; O’Brien, 2015) have come to the conclusion that increased female representation does not lead to tokenism, rather to the replacement of mediocre male politicians with competent female fellows who perform at least as well, if not better, than their male counterparts.

However, it remains unclear to what extent would the involvement of more women in (foreign) policymaking make any difference. For instance, feminists argue that women leaders, by placing gender equality at the crux of foreign policy decisions make a substantial difference in how states act (e.g. Sweden explicitly condemning Saudi Arabia for its treatment of women). On the other hand, some argue that a feminist foreign policy makes no difference as it places gender equality at the crux merely out of strategical considerations, for instance to further personal agendas or legitimate conventional policy goals; in this regard, feminist foreign policies are regarded as a precondition for achieving wider objectives (e.g. in Miller, 2008). The prominent example supporting this side of the argument is that despite having a female foreign secretary in Hillary Clinton, the United States continued to uphold vital relations with Saudi Arabia and did little to fulfil promises made to resolve humanitarian emergencies (e.g. in Afghanistan). What is more, such opinions hold that pro-arguments are cherry-picked and they are inconsistent: many argue for instance that Sweden is weak internationally and thus it can proclaim a feminist foreign policy without any real risks, but when it comes to complicated issues of multilateral foreign policy, it has been reluctant to act (e.g. War in Donbass).

So, what can we say about the thought that went viral not so long ago, namely that female leaders performed better during the pandemic? Well, the more we look at the data, the blurrier the picture gets; it may be true that Ardern, Merkel, Solberg, Tsai Ing-Wen & Co. dominated headlines (which is by all means fair and deserved), but at the same time, other women-led countries such as the Wilmes-led Belgium or Silveria Jacobs’ Sint Marteen failed to give an adequate response to the pandemic resulting in national catastrophes. This is not to suggest that men-led countries did better (they have not) but that we might be looking at a phenomenon resulting from the fact that women-led countries draw more scrutiny due to their low number. Supporting this hypothesis, two recent researches conducted by Supriya Garikipati (2020, University of Liverpool) and Soumik Purkayastha (2020, University and Michigan) can be brought up. Despite both studies concluding that countries with female leaders performed better, these studies reflected the exact same bias: gender was not statistically significant in either result and other variables, such as socioeconomic factors and political institutions often render the role of women non-salient. For instance, Nordic countries with arguably high social standards and peak economic indicators made Solberg’s job much easier, as she had a socially sensible, highly organised, healthy and wealthy society to deal with. However, Wilmes had a similar situation in Belgium, yet, she failed to give an adequate response and Belgium produced one of the worst numbers in Western Europe. On a different note, Sweden’s institutional framework does not enable the prime minister to overrule the decisions of public health agencies; in this regard, disease control and the power to make related policies ultimately does not reside in the executive or in the legislative (but in a non-majoritarian institution) and thus the gender identity of the leader is irrelevant in this sense. Consequently, it can be argued that small sample sizes can be misleading as the chances are higher that the findings are results of mere coincidence and thus confirmation bias can occur.

Despite the apparent empirical bias, several points can still be made concerning female leadership in politics. Sticking to the contemporary context, it is striking how badly countries with low proportions of female political representation do in terms of pandemic response: the top 3 worst performing countries (US, Brazil, India) also happen to have below-average proportions of female representation (104. with less than 0.3; 154. with 0.2; 148. with approx. 0.22, respectively) and traditional patriarchist ‘strongmen leaders’, so there must be a correlation between policy efficiency and female leadership. For this reason, although our observation that female-led countries do better cannot be backed by empirical data, the issue must be given attention and future researches must find ways to overcome these problems and find the true essence of female leadership as part of overcoming institutionalised and embedded discrimination against women not only in politics, but in our wider society starts with the academia. I truly believe that promoting female leadership has a positive overall effects: as half of our society consists of females, greater women’s representation has a significant effect on policy outcomes (Caiazza, 2002, Htun, Lacalle & Micozzi, 2013; Bratton & Ray, 2002) and can thus ultimately lead to a more fair, more representative society. In sum, despite challenges, there is growing evidence that more women’s representation leads to overall better policies (greater social and economic equality) and our recent experience based on pandemic response rather supports than contradicts that evidence. Perhaps the pandemic and the consequent success of female-led countries (regardless of empirics) will be the much needed wake-up call; however, it is sure that women have once again proven that they are well (if not better) suited for the task.