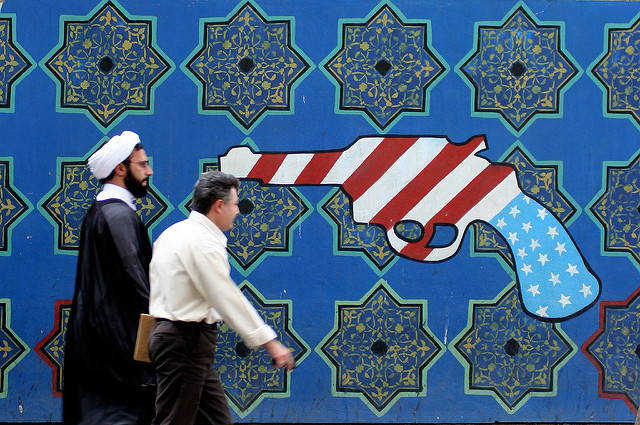 Between Trump and Khamenei: the daily life in Iran by the words of the Keshavarz

Interview by Barbara Polin, ICRP | Between Trump and Khamenei: the daily life in Iran by the words of the Keshavarz

Today’s Iran is a secular country with a theocratic government, whose representatives are dealing with one of the most serious national crisis since the institution of the Islamic Republic. On the behalf of ICRP I had the opportunity to interview the Keshavarz, an Iranian family travelling across Europe.

Imagine being a castaway, abandoned on a one-palm island. After years of isolation, a ship changes its course and takes you on board. As soon as you get used to the situation, the captain is substituted, and the new one decides to return you to your beloved island. This was roughly the dynamic that brought Iran first to a long waited international rehabilitation, and then to a familiar isolation.

For Iran, the ship was the 2015 signature of the JCPOA. The Joint Comprehensive Plan Of Action implied the elimination of the majority of the sanctions held against Tehran, caused both by the worrisome nature of its nuclear development program and the violation of human rights by the regime. The JCPOA, better known as the nuclear deal, implied a strict control on the Iranian nuclear development program, that had to be restricted to energetic purposes only.

From an international point of view, even if the human rights sanctions were kept in force, Iran went back on the international scene as a fully-fledged interlocutor for economic and political actors, that were immediately attracted by its abundant energetic and highly skilled human resources. As far as the domestic situation is concerned, the JCPOA signature strengthened the position of President Hassan Rouhani, whose liberal and western-friendly policies created a rift between his Cabinet and the Supreme Leader of Iran, the Ayatollah Ali Khamenei. Rouhani is the highest official of the government, but every speech, act and decision has to be approved by Khamenei, head of the State and commander-in-chief of the armed forces. Khamenei is also a prominent religious figure, since he is the highest major Shiite cleric, the official State religion, and he is in charge of protecting the values of the Islamic Republic.

The ship went back to the one-palm island in May 2018, when Donald Trump respected the campaign promise to tear up the JCPOA, defining Iranian regime as one the main sponsors of world terrorism. As a consequence of the repeal, the US put in force new heavy sanctions, excluding Iran and its eventual partners from American markets, especially the financial ones, that are irreplaceable in terms of liquidity and assets diversification. The ongoing uncertainty between the other JCPOA signatories concerns especially the European Union, which was one of the main sponsors of the agreement and a firm supporter of the current moderate government. Both Bruxelles and Tehran are stuck in a stalemate: the first is not in the position to develop an autonomous policy towards Iran, the second has gambled a whole political capital on a failed agreement.

I had the opportunity to interview the Keshavarz, an Iranian family travelling across Europe, that were glad to give to ICRP an insight of how is the daily life in today’s Iran. Nazi, the mother, is a high school teacher who lives and works in Tehran. She’s visiting Budapest with Irfan and Sitwesh, her sons, plus Rojan, her son’s girlfriend. Kamran, Nazi’s brother, has also joined them, taking a break from his job in London.

Which are the main difficulties in Iran today?

Nazi: The cost of living is constantly increasing, and the main concern of people is how to pay daily expenses with lowering salaries and raising prices. We are not anymore concerned about our safety, since we got used to a worsening situation, even though we were quite frightened at the beginning.

Kamran: I am really surprised that they can actually survive. Teachers’ salary scarcely covers the house rent, and I wonder how they can afford all the other expenses, like food shopping and travelling. Nazi’s husband is a successful engineer, they were used to having a sound financial situation, but now they are struggling. That’s why the black market has been growing a lot in the past years, and the prices went up with it. The middle class is suffering.

Did the new sanctions impact a lot on this situation?

Nazi and Kamran: The situation was also bad before, but it is getting worse. The companies are pulling off Iran, and the national economy is collapsing. This is happening also because people and enterprises are moving their savings abroad, to have them preserved from the growing inflation. Moreover, the government has been sustaining a huge military engagement in Syria and Iraq, and it is spending a lot of national resources on it.

What is your opinion about the Rouhani government?

Nazi: I think that President Rouhani has not any actual power in his hands: his role is just a formal one. In Iran, the majority of political decisions are taken by Khamenei and by the Pasdaran, the Islamic Revolutionary Guards. The government must change, since the things are getting worse and worse.

Kamran: We must change the form of government. I left Iran in 1998 because the idea of living there was not acceptable for me since I was a teenager. The situation is still tough today, but twenty years ago there was neither opportunity for young people, neither freedom, thanks to the policies of Khamenei.

And about US and EU?

Nazi: We Iranians are deeply disappointed for the end of the JCPOA, but not everybody has a bad opinion about USA, I think that population is divided by half. The EU…has not power over the situation, it only follows the American indications.

Kamran: The struggle between Iran and USA is not going to finish until our government accepts the prescriptions given by Trump, but the Ayatollah would never accept it. I think that Iran should get rid of the Islamic Republic and finally establish an Iranian Republic.

The current form of government, the Islamic Republic, is the main outcome of the 1979 Revolution. What is your opinion about that event?

Nazi: I think that the majority of Iranians regrets the Shah. Khamenei is listened and respected by only the 30% of Iranians, but his decisions are still guiding the State today’s. He has dismantled most of the achievements of the Shah, that managed to modernize and secularize the country.

Kamran: Everybody took part of the revolution. Iranians trusted Khomeini (the first Supreme Leader of Iran, spiritual sponsor of the Islamic Revolution) to guide them towards a future of democracy, justice and peace: there were only not the supporters of Khamenei to do the revolution, but various groups. He promised freedom to everyone, from observant Muslims that wanted to go to the Mosque to the teenagers in love with clubbing: when he came, he behaved in the opposite way.

How it is today the relation between Iranians and religion?

Nazi: Iran is a secular country: the Islamic and the State law are equal only from a formal point of view. For example, women play an active role in Iranian society, and they are allowed to act independently of their husband. I have to say that there was a slight improvement with Rouhani than with previous government, the one of Ahmadinejad.

Kamran: Let me to tell you an example. My mother has always been a pious Muslim, praying 5 times per day, observing the Ramadan and so on, while experiencing the Islamic Revolution. Few years ago I have asked her about preys, and she replied me “I don’t do that anymore, I am not stupid”. Our government turned us against our own religion: they forced us to practice it at their own way, and now everybody is aware that they are exploiting Islam to stay at power.

What about the youngest generations? How do they feel about their future?

Nazi: My son Irfan and his girlfriend Rojan are moving to Germany for studying. Even if Iranian universities are known to give an excellent education, there is no job for them.

Kamran: When I go back visiting my relatives, I find that every taxi driver in Shiraz has at least one or two degrees: how he can use his expertise, his skills, his knowledge to make the country better? Iranian people are not taking this disastrous situation anymore: I am waiting to see my country free again.