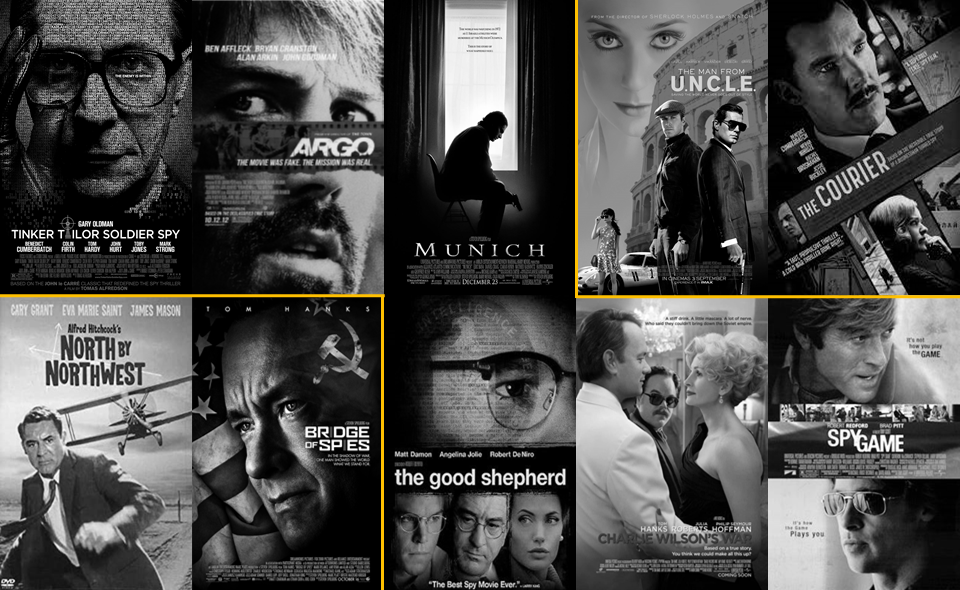 The following is a list of ten spy themed movies. There are certainly numerous spy themed movies and listing the best ten movies is a difficult task since the choice of movies is subjective and depends on the selection of criteria which is varied in nature.

Tinker, Tailor, Soldier, Spy is a movie version of John le Carré’s well-known novel which is set in the Cold War era. It was released in 2011 and directed by Tomas Alfredson. It is a gripping spy movie which involves the hunt of a double agent embedded deep within the British secret service but working for the Soviet Union. The movie won critical acclaim in its ability to showcase spy thrills without displaying any high-speed car chases or big bazooka action scenes. The movie is deliberately subtle in nature with laudable period cinematography and is supported by world class acting by well-known actors such as Gary Oldman who plays the British spy tasked with the mission to uncover the identity of the mole who has been leaking secrets to the Soviets.

The movie was released in 2012 and directed by Ben Affleck who also plays the role of a CIA agent who infiltrates Tehran- the capital city of Iran during the Iran hostage crisis (1979–1981) with the objective to smuggle out six Americans from the Canadian embassy. The movie is based on real life spy named Tony Mendez who put forth the plan of rescuing the six Americans by posing as a Canadian film crew involved in the making of a movie. Argo is a movie of real-life espionage and spy craft and chronicles the life or death covert operation to rescue the six Americans. Argo won several awards including the Academy Awards as well as the Golden Globes.

It is a 2005 released historical action movie directed by Steven Spielberg. The movie is based on a book by George Jonas named Vengeance which gives an account of the secret Israeli operation called ‘Operation Wrath of God’ which was a covert and retaliatory operation after the Black September event at the Munich Olympics in 1972. The movie stars Eric Bana as a former bodyguard named Avner who is the leader of the secret squadron of four who are handled by a person named Ephraim played by Geoffrey Rush. The aim of the mission is to target eleven individuals. The movie won critical acclaim and won five Oscar nominations. No doubt Munich is a thrilling movie but it opens the dialogue for questioning revenge and vengeance as well as ethics and morals.

It is a 2015 spy action packed movie directed by Guy Ritchie set against the backdrop of the early 1960s during the Cold War. The filming of many scenes was done at iconic locations in Italy and the United Kingdom. This movie is based on the retro 1960s television adaptation. In the movie, the CIA agent Solo played by Henry Cavill and KGB agent Kuryakin played by Armie Hammer put aside their differences to put an end to an international criminal organisation. There is also a British secret service agent thrown into the mix for additional story line. The world faces a nuclear bomb threat and the responsibility falls onto this trio to stop the villains from succeeding. The movie acknowledges the rivalry between the West and the East and showcases the iron curtain divide between the two spheres of influence led by the US and the Soviet Union. The movie is certainly action packed and among the several such scenes the one wherein two characters are shown escaping East Germany over the wall and into Western Germany.

The Courier is a relatively new movie and was released in 2020 at the Sundance Film Festival. It is based on the real life of a British businessman named Greville Wynne played by Benedict Cumberbatch who is recruited by MI6 and the CIA to obtain intelligence from the Soviets. The title of the movie is fitting since that is exactly what the protagonist does, i.e., he delivers critical information from the Soviet side to the Western side. However, Wynne is captured and imprisoned by the KGB. But all is not in vain as the intelligence provided by Wynne and his Soviet source codenamed Ironbark is helpful during the Cuban Missile Crisis 1962. Wynne is released in a prisoner exchange and Ironbark is executed.

It is a relatively older movie released in 1959 and directed by Alfred Hitchcock. The movie is a delightful concoction of suspense, intrigue, comedy and humour. The movie is set during the Cold War era and is based on the theme of mistaken identity wherein an innocent man Roger Thornhill (Cary Grant) is pursued across America by a gang of foreign spies under Philip Vandamm (James Mason) who believes that Thornhill is a CIA agent named Kaplan. This old but highly regarded movie is similar in story style to the James Bond movies wherein daring heroes face off charming villains.

This Steven Spielberg directed movie was released in 2015. The movie is set against the backdrop of the Cold War wherein tensions run high and are palpable. A Soviet spy Rudolph Abel (Mark Rylance) is exposed as a KGB spy and is charged with espionage. Jim Donovan (Tom Hanks) is an insurance lawyer who is given the job to defend Rudolph Abel as his defence attorney to give a semblance of a fair trial. However, Donovan takes his task seriously and mounts the best possible defence. However, Abel is charged with espionage, convicted and sentenced to prison. A few years later, the Soviets capture an American named Francis Gary Powers, a pilot of the secret U-2 spy plane program and sentence him to prison. The CIA recruits Donovan to negotiate Powers’ release who has no experience in espionage but he is nevertheless determined to see it through. The bridge in the movie refers to Glienicke Bridge where the prisoner exchange takes place involving Powers and Abel towards the end of the movie. Bridge of Spies was a smash hit and received several Academy Award nominations with Rylance winning the award for the best supporting actor.

The Good Shepherd is a 2006 released movie loosely based on real events as it depicts the birth of the American counter-intelligence in the Central Intelligence Agency through the lens of one man’s adult life. The movie is directed by the Hollywood heavyweight Robert de Niro and has a stellar cast including Robert de Niro, Joe Pesci, Alec Baldwin, Matt Damon, Angelina Jolie and Edward Redmayne. It follows the life of a brilliant Yale student Edward Wilson who is played by Matt Damon. He is recruited to work for the CIA during World War II and with the passage of time witnesses and faces many challenges which clash with his ideals and his family life. The movie follows the timeline of the Cold War as Wilson navigates his way through national security matters with ease and is even successful in revealing the identities of a double agent and a mole.

It is a 2007 biographical movie based on the story of U.S Congressman named Charlie Wilson and CIA operative Gust Avrakotos whose efforts led to organise and support the Afghan rebels in their war with the Soviets. The movie is based on the story and book of the same name. The movie has a stellar cast including the likes of Tom Hanks, Julia Roberts and the late Philip Seymour Hoffman. Wilson takes up the cause of the Afghan Mujahideen following events of the Soviet invasion of Afghanistan and the meeting with Joanne Herring who has anti-Communism beliefs. The movie depicts how Wilson helped to fund the covert war in Afghanistan and raises questions about the circumstances which led to the birth of Taliban and al-Qaeda. Towards the end of the movie, Wilson receives a commendation for his services rendered towards his country.

It is a Hollywood movie released in 2001 and directed by Tony Scott and stars Robert Redford and Brad Pitt among the central characters. Redford plays a veteran CIA spymaster Nathan Muir who is just one day away from retirement and learns that Pitt’s character Tom Bishop is in Chinese prison and is scheduled to be executed on charges of espionage. Muir must decide whether to go in and rescue his protégé Bishop while the CIA have no intentions to do so due to political ramifications. The movie is set against the background of top level trade talks between the U.S and China. Spy Game contains lots of conflict, guns and hostile posturing.

This movie stands out in the list since it is an animated comedy movie released in 2019.  It is a spy thriller movie about two men super spy Lance Sterling and scientist Walter Beckett who are portrayed as opposites of each other. They form an unlikely duo and are forced to work together in an undercover mission in which the debonair Sterling is turned into a pigeon. Will Smith and Tom Holland lend their voices to Sterling and Beckett respectively in this fun animated adventure.