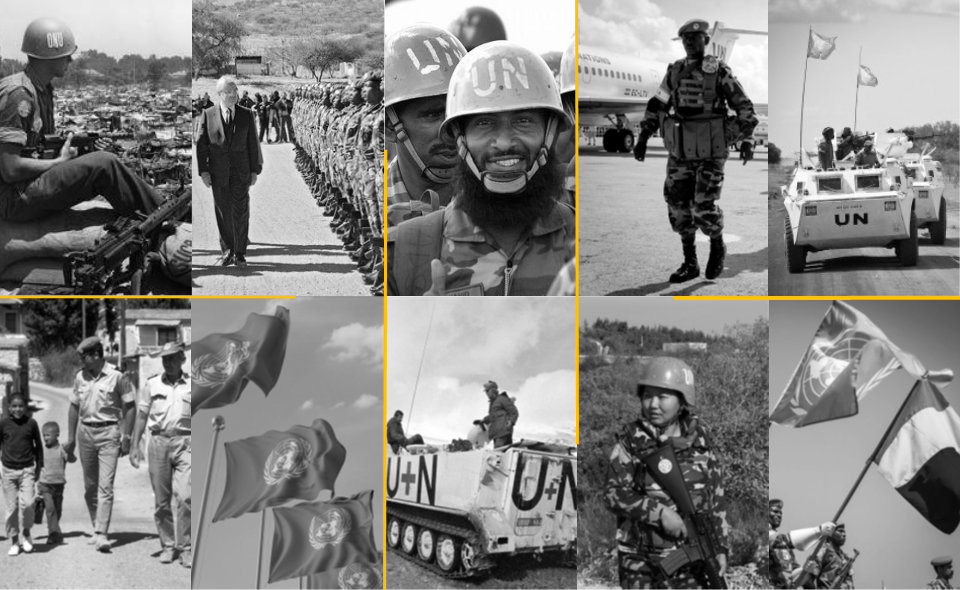 The 10 most prominent UN peacekeeping missions

Peacekeeping, as defined by the United Nations, is a way to help countries torn by conflict and create conditions for sustainable peace. UN peacekeepers composed of soldiers and military officers, police officers and civilian personnel from many countries monitor and observe peace processes that emerge in post-conflict situations and assist ex-combatants in implementing the peace agreements they have signed. Such assistance comes in many forms, including confidence-building measures, power-sharing arrangements, electoral support, strengthening the rule of law, and economic and social development. Ever since the inception of the United Nations in 1945, there have been numerous peacekeeping missions in different regions of the world, to help countries navigate the difficult path from conflict to peace, progress and development.

When creating the list, we intended to display ten prominent UN peacekeeping missions of the past as well as of the present ongoing ones, that aim to help countries, torn by conflict, to move towards the path of hope and peace.

1. The United Nations Operation in the Congo (ONUC)

ONUC was the UN’s first peacekeeping mission with remarkable military attributes and it was deployed in the Republic of Congo in 1960 in response to the Congo Crisis. After gaining independence from Belgium on 30 June, 1960, Congo descended into chaos, disorder and instability with the advent of several secessionist and mercenary forces, which prompted Belgium to invade Congo with the view to protect Belgian nationals living there. Upon appeal to the United Nations for assistance by the Congolese government, the ONUC was established with the purpose to withdraw Belgian colonial forces and restore internal stability. At the peak of the crisis, ONUC which comprised 19,828 personnel in July 1961 moved from a peacekeeping mode to a military phase, getting involved in combat against the secessionist and mercenary forces. ONUC led to the manifestation of civilian aid in Congo, which became the single largest assistance aid by the UN at that time.

UNTAG was deployed in the country of Namibia from April 1989 to March 1990 to oversee peace and elections there. Namibia had been under the occupation of South Africa since 1915, first under a League of Nations mandate and later illegally. Since 1966, there had been an insurgency brewing up between South African forces and PLAN (People’s Liberation Army of Namibia), the military wing of the Namibian-nationalist Southwest African People’s Organization (SWAPO). The UN Security Council passed a resolution (435) in 1978, which set out a plan for an election process administered by South Africa, but under UN supervision and control after a ceasefire was agreed between the parties. In 1988, the two sides agreed to a ceasefire. As UNTAG was deployed, brief hostilities began to start on the day the transition was planned to begin. After a new round of negotiations, elections for the Constituent Assembly finally took place in November 1989. The elections, monitored by UNTAG were peaceful and were declared free and fair. The constitution was adopted 4 months later, signalling Namibia’s official independence on the international stage and thereby leading to the conclusion of UNTAG. At its height, nearly 8,000 men and women – civilians, police, military from more than 120 countries were deployed in Namibia to assist in the mission.

Often perceived to be the most successful UN peacekeeping mission, UNMIL was established in September 2003 to oversee a ceasefire agreement in Liberia after the resignation of President Charles Taylor and the conclusion of the second Liberian civil war. Succeeding the United Nations Observer Mission in Liberia (UNOMIL), UNMIL together with other organizations managed to disarm and demobilize 101,496 active combatants and their support structures. In the year 2006, a UN public opinion survey was conducted in which 94% of Liberians said UNMIL helped to improve the security situation in the country, 90% said implementing the peace agreement was very good, 92% of respondents said retraining of the police by UNMIL was very good, while 88% said UNMIL improved human rights conditions in the country. UNMIL deployed more than 180,000 peacekeepers over 14 years – including some 130,000 troops, 16,000 police officers and 24,000 civilian staff.

The operation of UNAMSIL happened in Sierra Leone from 1999 to 2006, with the aim to ensure the implementation of the Lomé Peace Accord, an agreement to end the Sierra Leone civil war. Replacing a previous mission, the United Nations Observer Mission in Sierra Leone (UNOMSIL), UNAMSIL constituted a major shift in UN peacekeeping as it was one of the first missions in which the UN troops were permitted to use force to protect civilians under imminent threat of physical violence. The mandate of the mission involved cooperating with the government of Sierra Leone and other parties to the Peace Agreement in ensuring its implementation and to assist the government in its proposed disarmament, demobilisation and reintegration plan. UNAMSIL concluded in the year 2005. A total of 17,500 military personnel, including 260 military observers and up to 170 police personnel were involved in this peacekeeping mission.

UNMISS is an ongoing peacekeeping mission in the recently independent nation of South Sudan which became independent on 9 July 2011. Some of the objectives of UNMISS are supporting and fostering long-term state-building, economic growth and progress in South Sudan, coordinating with the government in exercising duties of ensuring conflict prevention and mitigation and providing technical and logistical support to the government in developing its capacity to provide security, consolidating rule of law and strengthening security, economic and justice domains. As it stands today, the mission’s mandate includes four pillars- protection of civilians, creating conditions conducive to the delivery of humanitarian assistance, supporting the implementation of the peace agreement and the peace process and monitoring, investigating, and reporting on violations of humanitarian and human rights law. As of March 2021, 19,075 personnel are deployed in this peacekeeping mission.

UNFICYP was established in the year 1964 to prevent further fighting between the Greek-Cypriot and Turkish-Cypriot communities who have rejected the idea of power-sharing on the ethnically divided island of Cyprus. As the result of an attempted coup in the year 1974, UNFICYP’s role further increased to monitoring a buffer zone and helping to restore law and order and propagating confidence building measures between the parties. Because of the absence of a formal cease fire, demilitarisation and law and order maintenance is an ongoing challenge. The mission continues to strive in providing necessary humanitarian help and assistance and improving the infrastructure and development projects and pushing for negotiations between the two sides for a solution to reunify the island. The Mission’s work is based on four components that work together closely: the military, UN Police (UNPOL), the Civil Affairs Branch and Administration, which supports all activities. The Mission counts almost 1100 personnel. Since 1964, almost 186 UN personnel have lost their lives while serving in UNFICYP.

UNMIK was launched to help establish a Kosovar government with legitimate power and authority following the end of the brutal 1998-99 war between Kosovo and Serbia. Original mandate involved disarming groups, maintaining peaceful communities and promoting human rights. UNMIK transferred governmental authority over to Kosovo in 2008 after the national government of Kosovo was established, though in today’s scenario its independent status is still disputed by Serbia. In today’s scenario, UNMIK deploys a small number of troops in ensuring the sustenance of peace and facilitating an inclusive society for all ethnic groups and protecting human rights and preventing its violations. As of May 2021, a total of 351 personnel are deployed in this mission.

UNDOF came into being as a part of the agreement that ended the Arab-Israeli war in the year 1973. It was established to maintain the ceasefire between the countries Syria and Israel, supervising the disengagement of their forces and assessing the area of separation in the Golan Heights. The mandate of UNDOF has been renewed every six months. Over the years, while recommending the next extension of the mandate, the Secretary-General has repeatedly observed that, despite the present quiet in the Israeli-Syrian sector, the situation in the Middle East was very tense and was likely to remain so, unless and until a comprehensive settlement covering all aspects of the Middle East problem was reached. In the prevailing circumstances, he considered the continued presence of UNDOF in the area to be essential. As of 10 August 2020, 973 troops, 47 international staff and 78 national staff are deployed in this mission.

UNIFIL is a UN-NATO peacekeeping mission established on 19 March, 1978 to confirm the  Israeli withdrawal from Lebanon, owing to its invasion five days prior by Israel. UNIFIL was established to restore peace and security and assist the Lebanese government in restoring authority in the area. Following the Israeli Invasion of Lebanon in 1982, Israeli withdrawal from Lebanon in 2000 and the 2006 Lebanon War, UNIFIL was enhanced and it has continued to monitor the cessation of hostilities, support the Lebanese armed forces in its deployment and extend humanitarian aid to civilian populations and ensure the voluntary and safe return of displaced persons over the course of the previous events of conflict in the region. UNIFIL’s mandate undergoes annual renewal by the United Nations Security Council and was recently extended on 28 August, 2020. As of April 2021, 10,300 military personnel and 800 civilian staff are deployed in this mission.

MINUSMA is a UN peacekeeping mission in Mali and was established in April 2013 to stabilise the country after the Tuareg rebellion of 2012, which started an insurgency in the north of the country and owing to the military coup, made advances to capture three biggest cities in the north, plundering the country into total chaos, violence and disruption. Often described as the UN’s most dangerous peacekeeping mission due to increasing fatality of the peacekeeping forces, the force deployed currently is one of the largest UN peacekeeping forces in the world. Despite continued hostility and military takeovers by rebel groups in recent times, the mission still continues to monitor the implementation of possible ceasefire arrangements, facilitate political reconciliation, assist in the integration of displaced persons, deliver humanitarian assistance and foster and protect human rights. As of May 2021, a total of 18,343 personnel are deployed in this mission.