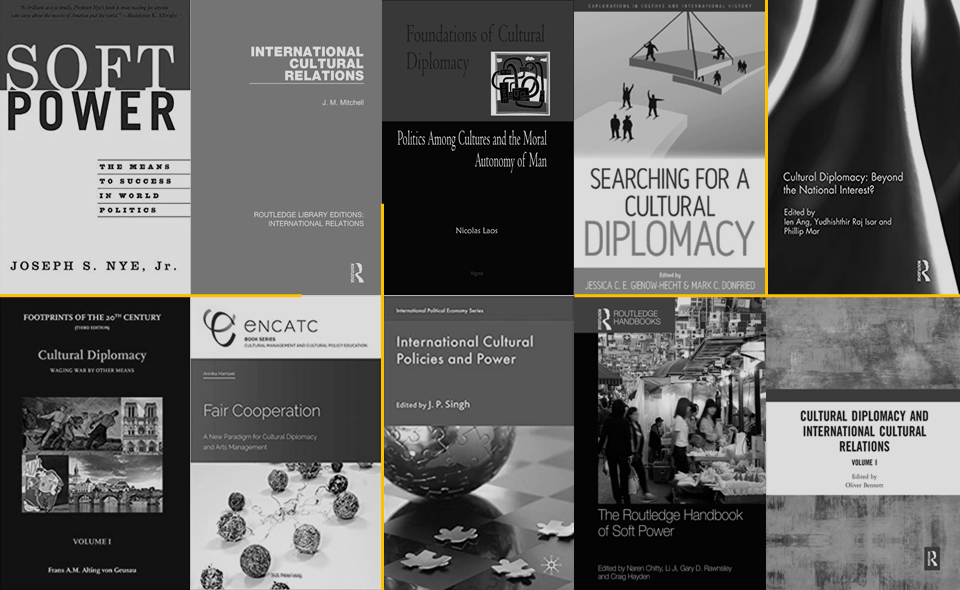 The top 10 books on cultural diplomacy

Moreover, the field of cultural relations is a multidisciplinary field. Therefore, recommendations in this list are a reflection of that and the general discourse on cultural diplomacy. It must be noted that this list is not in order of importance and there are more books that could be added to the list from a Global South perspective, but these are some of the main books and authors in this area of research.

One of the most fundamental texts to cultural relations and cultural diplomacy discussions is “Soft Power: The Means To Success In World Politics” by Joseph Nye. This renowned author coined the soft power concept in the 1980s, as he defined it as a form of power relating to a country’s culture, political ideals, and policies (Nye, 2004). This concept has been further discussed by the author in academic articles such as Soft Power in the nineties, as well as has been widely used in academia and continues to be a central concept for cultural diplomacy discussions.

Another important author in this area of studies and more specifically on external cultural policy is the work of J. P. Singh. In this book the author notices that usually political scientists are not interested or informed on the cultural aspect of their work, while their input in the field of international cultural policies is necessary. Therefore this book gives an insight into local, national, and international cultural policies contexts with case studies from countries such as Sweden, the USA., Japan, India, and on a regional level with the EU.

In contrast to the last book calling for political scientists to analyse cultural industries, the authors of this book aimed to discuss cultural diplomacy from the perspective of cultural scholars. Ang, Mar, and Raj Isar discuss notions such as soft power and contextualize cultural diplomacy in socio-political contexts. Some of the countries this book analyses are China, the USA, South Korea, Japan, and Australia.

In this book by Gienow-Hecth and Donfried, the classical notions of cultural diplomacy as a means of political influence are questioned, as the references explored had been more focused on the U.S. and cold war tensions. The authors explore other regions such as Eastern Europe, Middle East, and Asia beyond subordination perspectives on cultural exchanges.

This book written by founding editor of the International Journal of Cultural Policy, Oliver Benett, discusses notions of cultural diplomacy and cultural relations focusing on multidisciplinary and diverse geographic contexts. The concept of soft power is central in this book and traditional cultural diplomacy and power implications in the different case studies of the chapter of the book. Some of the countries it covers are Russia, Armenia, India, Qatar, Kazakhstan, Japan and Canada.

6. Nicolas K. Laos | Foundations of Cultural Diplomacy: Politics Among Cultures and the Moral Autonomy of Man

Foundations of Cultural Diplomacy debates the philosophical aspect of cultural relations through concepts of freedom, reality, and history of the inherent relation between culture and politics. This book uses critical theory and discusses western and European identity tensions through the philosophical perspective on cultural diplomacy itself.  This book takes an innovative and different perspective on cultural diplomacy, focusing on consciousness influence through this form of diplomacy.

This handbook by Chitty, Rawnsley and Hayden provides an overview on the concept of soft power as central for cultural diplomacy and cultural relations studies. The book criticises the concept of soft power as overused without a clear notion of its true meaning. Because of its importance in cultural diplomacy scientific discourse, these authors decide to further elaborate on its meaning in the first chapter, specially in regards to conceptual and methodological debates. Moreover, in the second part of the text, case studies from different regions of the world are analysed.

This book by former diplomat John Matthew Mitchell details the role of cultural relations in international affairs. Mitchell takes a historical perspective on cultural relations before the term was defined as such and analyses cultural diplomacy in relation to political events from the 19th century onwards. This book was written in 1986 and is more geared towards international relations students and government officials. It focuses on the experiences of Japan, France, Germany, Italy, and the USA.

Frans Alphons exposes the historical background of Europe during its most conflictive historical events and critically assesses cultural diplomacy as a post-war tool for control. Furthermore, it discusses the lack of funding for cultural diplomacy from countries such as the United Kingdom, Germany, and the USA. This book elaborates on the experiences of these countries and debates Western and Eastern experiences on this topic.

Finally, the book from Annika Hampel gives an outlook on cultural diplomacy from a more recent perspective on generating fair cultural exchanges. Hampel’s contribution to this field of study has become a reference for new debates on cultural cooperation, as her research brings a perspective on Global North and Global South relations for cultural practitioners and scholars. Her contribution to the field of cultural diplomacy and cultural cooperation focuses on cultural diversity and sensitivity regarding power relations, specifically in Indo-German collaborations.