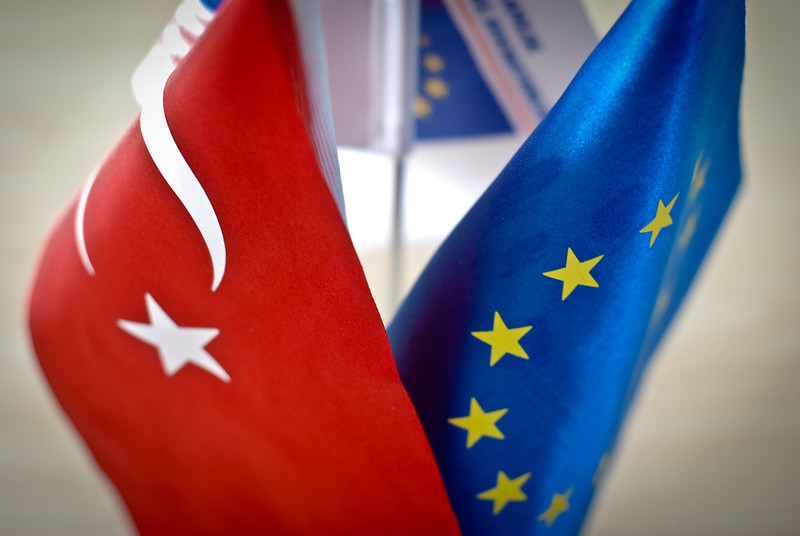 Recently, a top European Union Court gave a ruling, banning the headscarves worn by Muslim women in Europe under certain conditions. Turkey slammed the decision, citing “serious violations of religious freedom” and arguing that this would further accelerate prejudices against Muslim women in Europe. This is one of many such instances, where either or both sides have fired shots at each other, unhappy at each other’s actions, and further complicating reconciliation between the two. EU-Turkey relations have been at an all-time low in recent times, with Members of European Parliament (MEPs) often calling on Turkey to demonstrate commitment of closer relations with the EU, especially in terms of European values and rights that the EU so proudly boasts of such as upholding democracy, rule of law, protecting freedom and so forth. Other factors such as Turkey’s hostile foreign policy towards Greece and Cyprus, its recent hostility towards France- one of the key stakeholders and a driving force of the EU in the wake of decapitation of a school teacher and most distinctly, its crackdown on freedom and serious human rights violations and mass incarceration of people, including journalists and political opponents has further jeopardized Turkey’s accession plans to the EU.

Turkey has been trying to have the membership of the EU for a long period of time imaginable, following its application to become a full member of the European Economic Community (EEC), the predecessor of the EU in 1987. One of the main reasons for Turkey not being accepted as a member of the EU and its opposition by the member states is its failure to meet the Copenhagen criteria, which cites that those countries that seek to be a part of the bloc must embody democratic principles and values, human rights, and an open market economy. These domains often serve as prerequisites in negotiating the membership and Turkey, by all means has been a serious violator of these norms, especially when it comes to rule of law, democracy and protection of human rights. Under its power-hungry leader Recep Tayyip Erdogan, the democratic set up of Turkey has been transformed into an executive presidential system. One of the recent moves that seeks to erode the very basis of human rights protection was the presidential decree issued to withdraw Turkey from the Istanbul Convention, a treaty brought up to endorse women’s rights in Turkey. Women’s safety, security and rights have been at an all time low in Turkey under Erdogan’s rule, with frequent abuses and hate also carried out against people from the LGBTQ community.

Apart from destabilizing human rights in the country, Erdogan is also dismantling freedom of speech and expression, jailing political opponents and journalists and closing down political parties that have been in opposition to him and his party. Erosion of democratic and human rights values have been complemented by a stalled and eroding economy, with the Turkish Lira losing 46 percent of its dollar value. Other factors such as Turkey’s hostility towards other member states of the EU, especially Greece in the areas of maritime disputes, friction over influx of migrants into the respective countries, its draconian actions and further plans of annexation in the disputed island of Cyprus, its hostile relations with France historically and recently in the wake of the latter’s tough stance on radical Islam, with Erdogan hurling serious accusations and insults against his French counterpart and calling for boycott of French goods and Turkey’s growing closeness with Russia have further led to skepticism among several MEPs with some citing that Turkey can never be a member of the EU and that a separate path for negotiations and trade should be adopted.

Despite the ongoing fiasco and debacle, Turkey remains strategically important for the member states of the European Union, especially in the regions of the Mediterranean and the Middle East. Turkey is also one of the important players of the EU when it comes to handling the Syrian refugee crisis, with Turkey having accepted a huge influx of immigrants fleeing from the war-torn country. Previously, both the countries had agreed on a Joint EU-Turkey Action Plan at bringing order in the migration flows and stemming the influx of irregular migration in Europe. Unlike the ageing demographic trend of some of the member states of the EU, Turkey has a relatively young and an educated workforce, which the EU can massively benefit and utilise if Turkey joins the bloc. Turkey also happens to be the country through which key gas and oil pipelines from Asia run across, and further its access to energy reserves in the Mediterranean is likely to make it an effective trading partner of the EU through free trade agreements and easy mobility and market for goods. As of 2020, Turkey is EU’s 6th biggest trading partner and the EU is by far the biggest import and export partner of Turkey. Two-way trade in services between the EU and Turkey in 2019 amounted to €26.5 billion, with EU imports of services representing €13.9 billion and exports €12.6 billion. Hence, Turkey is a key player of the EU in these aspects.

Despite the positive side of things, in my opinion, Turkey’s accession to the EU at this point of time is very unlikely to further progress as long as it continues to carry out carnage on democracy and human rights in its own home. The path Turkey is taking at this point in this regard under Erdogan, would further make it drift apart from the European values and ideals that the EU so proudly boasts of on the international stage. Subsequently, its continued friction with the member states over issues of maritime disputes, migration and even the matters of religiosity, its continued pursuit of annexation and resettlement of disputed territories in places like Cyprus along with its other antics is very likely to jeopardise its long-driven ambition of joining the bloc. Erdogan is beginning to create a system which is very likely to keep him in power for a very long period of time. A change in political leadership along with changes in the current structure of addressing basic fundamental issues may see a change in the way Turkey is perceived on the global stage, especially by its European neighbours. What brought Turkey closer to the bloc in the latter part of the 20th century was its adherence to democratic and economic reforms and practises and international norms and regulations. A return to its past positive approach towards the intrinsic dimensions of an ideal state may put Turkey back on a fast track to join the most successful regional bloc.