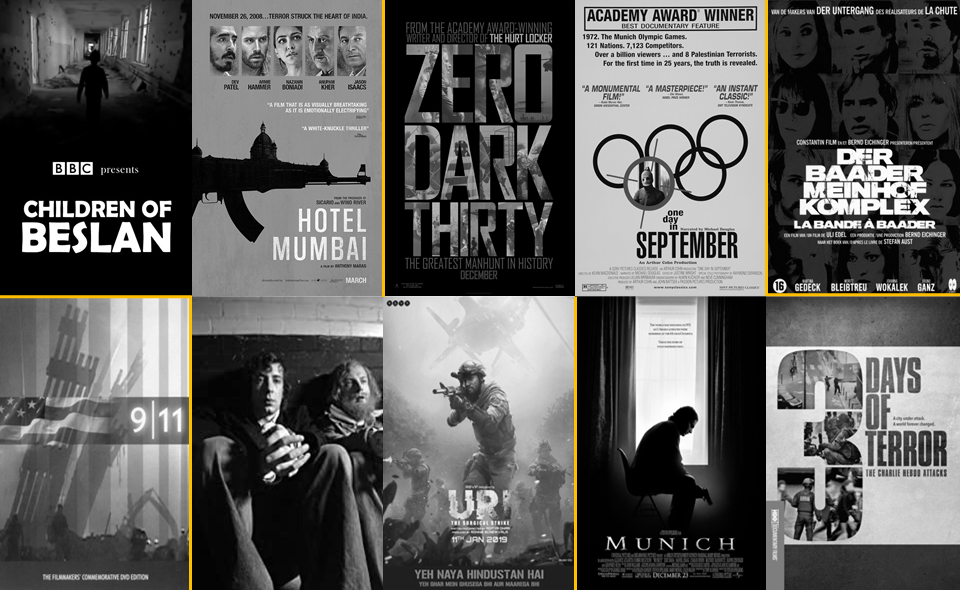 The top 10 movies on terrorism

Terrorism is one of the sad realities of today, with increasing radicalization and deprivation of the value of human lives, terrorist activities have presented themselves as one of the main challenges faced by the world with a major threat to countries that have not been ravaged by it; from Afghanistan and Pakistan where attacks against religious sites continue unabated to Nigeria where there was widespread violence following Boko Haram’s mass killings. Although violent extremist movements may take in many different forms ranging from political extremism to terror directed against civilians or government targets there is no denying the fact, that the poor, deprived and vulnerable innocent citizens are at the receiving end. It is in the wake of these incidents many filmmakers have come forward directing these horrors unleashed by terrorist attacks into movies and documentaries showcasing to the world the need for putting up a united front and shared responsibility to tackle this menace.

Children of Beslan is a gripping documentary film released in 2005, about the Beslan school siege, telling the horrors of 1 September 2004, when Chechen militants took more than 1,000 people hostages at School No 1 in Beslan, North Ossetia, for three days children and adults were held hostage in a sweltering gymnasium, denied food and water, and forced to keep their hands over their heads. The hostage-takers were members of the Riyad-us Saliheen, sent by the Chechen warlord Shamil Basayev, who demanded Russian withdrawal from and recognition of the independence of Chechnya. On the third day of the standoff, Russian security forces stormed the building with tanks, incendiary rockets and other heavy weapons. The harrowing siege ended on September 3 with a series of explosions and a hail of gunfire that killed some 350 people – half of them children. What makes this a documentary, in a real sense, is that it recounts survivors’ testimonies and does not explore any political aspects nor assign blame to any party for the horrendous terrorist attack and botched up rescue operation. In this film, the youngest survivors of Beslan tell their story about the deadliest school shooting in human history.

Released in 2013, this movie explores the operation undertaken by the US Navy SEALs to launch a nighttime strike, killing bin Laden in his compound in Abbottabad, Pakistan. In the backdrop of the terrorist attacks of Sept. 11, 2001, or the 9/11 attacks on the USA, Osama bin Laden becomes one of the most-wanted men on the planet and al-Qaeda as one of the most dangerous terrorist groups possessing threat to the whole world. This resulted in the US invasion of Afghanistan and the consequent war on terrorism, however despite long drawn campaigns, the US failed in capturing Osama-bin-laden and thus the worldwide manhunt for the terrorist leader starts. In the movie “Maya,” a lone wolf CIA agent who sticks to her conviction that bin Laden is not in a cave in Afghanistan, hunched over a kidney dialysis machine, but is likely living in relatively open sight starts pursuing leads to ultimately establish his location in Pakistan. Moreover, in reality, when the terrorist was finally tracked down and taken out, the universal astonishment was that his hiding place was a large, walled compound in Abbottabad, Pakistan and that his residence there was relatively widely known in the same area, anyway, as the location of a Pakistan military college. Ultimately, it is the work of a dedicated female operative that proves instrumental in finally locating bin Laden.

Hotel Mumbai is a 2018 action thriller film which is inspired by the 2009 documentary Surviving Mumbai. A gripping true story of humanity and heroism, Hotel Mumbai vividly recounts the 2008 siege of the famed Taj Hotel as its main focus also depicting the nearby terrorist attacks in the hub of Indians economic capital the Mumbai city by a group of terrorists belonging to the outfit Lashkar-e-Taiba. These terrorists arrived in the city through boats with a full-fledged plan to unleash a massacre directed by a man known as “the Bull” they launch a coordinated assault against 12 locations across Mumbai, including the hotel. A closing script reveals that those responsible for planning the attack remain free to this day, but the hotel was repaired and parts reopened within months of the event. The final scenes show a memorial to the staff and guests who fought in the Battle of Hotel Mumbai, and footage of the grand reopening of the hotel, 3 months later. This movie seriously depicts the horrors of terrorism and how invaluable life is for the brainwashed human machines (Terrorist) who slaughter people without conscience.

4. One Day in September

“One Day in September” is a new kind of thriller – one where real lives are at stake and every event is true, showcasing how the 1972 Olympics of Munich which were billed as the “Olympics of Peace and Joy” became the Olympics of terror in the backdrop of 11 Israeli athletes being held hostage in the Olympic village in Munich, while the world looked on, incredulous and helplessly succumbing to the terrorist group. Depicting the real-life incident of the 1972 Munich Olympics, which were interrupted by Palestinian terrorists taking Israeli athletes hostage, in the movie we can witness the real footage taken at the time, we see interviews with the surviving terrorist, Jamal Al Gashey and various officials detailing exactly how the police, lacking an anti-terrorist squad and turning down help from the Israelis, botched the operation. This movie communicates to us that how in the absence of international cooperation even solvable issues become complex with innocent people bearing the burden.

Showcases the Germany of the 70s: Murderous bomb attacks, the threat of terrorism and the fear of the enemy inside are rocking the very foundations of the yet fragile German democracy. This movie portrays the radicalized children of the Nazi generation lead by Andreas Baader, Ulrike Meinhof and Gudrun Ensslin who are fighting a violent war against what they perceive as the new face of fascism: American imperialism supported by the German establishment, many of whom have a Nazi past. They aim to create a more human society but by employing inhuman means they not only spread terror and bloodshed, but they also lose their humanity. What makes the coming of this film in the present moment so fascinating is that we have all but forgotten the intensity of that period, the fervour of politics, here protesting the Vietnam war, in Germany, resisting American imperialism supported by the contrite German establishment of the post-World War II era. This movie is a reminder of the time when feelings were more aroused by ideologies than buried by the long sleep of consumer culture. Wrong-headed, extreme in principles and procedures, terrorism can never be condoned, glorified, or presented as an option are the themes that this film explores and portrays vividly through its fine direction and cinematography.

9/11 is a real-life documentary following the events of September 11 from an insider’s view, through the lens of James Hanlon and two French filmmakers who were in Manhattan on 11th of September filming a documentary on a rookie New York City firefighter when they noticed a plane overhead and later, they could hear the crash as the plane hit the World Trade Center. What makes 9/11 interesting is the presence of filmmakers and the footage they were able to capture as they rushed immediately to the scene, and later on it became clear to them that this was the only known footage from inside the Twin Towers that day. Furthermore, the film also explores “legacy kids”, young people who lost a loved one to the attacks and have honoured their dead by becoming firefighters. 9/11 thus not only presents the chilling account of terrorist attack and the heroic deeds of the people but also mourns the dead without steering into conspiracy theory or politics, but instead sticks to the ethics of film-making capturing the heartbreaking moments.

Told through documentary, drama and first-hand accounts, this revealing film is a unique account of the most ruthless IRA bombing campaign ever to hit mainland Britain 1974-1975. Adapted for the screen from the book ‘Timebomb. While the population took on a wartime mentality, the police frantically search for any leads and the terrorists’ whose confidence grew and their attacks became more daring and deadly. The end product is a documentary that captures the facts and the atmosphere of the time well and provides a fascinating look back in enough detail to engage the unaware at the time. The use of news footage from the time makes it that much more involving and really making it an overall impressive documentary that is engaging and detailed in its focus on part of the decades of Northern Irish terrorist violence.

Uri: The Surgical Strike is based on the real-life surgical strikes conducted in 2016 by the Indian Army, against militant launch pads in Pakistan occupied Kashmir (PoK) where 35-50 terrorists were reportedly killed in the covert operation, in retaliation to the terrorist attack in Uri that killed 19 Indian soldiers and to avenge their killing. Divided over five chapters, the film chronicles the events of the surgical strike conducted by the Indian military against suspected militants in Pakistan occupied Kashmir. It tells the story of the 11 tumultuous events over which the operation was carried out. This movie has a no-nonsense plot that is entirely focused on the operation that was conducted for URI, clearly depicting how the event was planned and carried out along with establishing the fact how Pakistan acts as a safe harbour for terrorists. However, subsequently, these incidents carrying out surgical strikes were denied by Pakistan.

Munich is a 2005 historical action thriller film produced and directed by Steven Spielberg. It is based on the 1984 book Vengeance by George Jonas, an account of Operation Wrath of God, undertaken by the Israeli government’s secret retaliation against the Palestine Liberation Organization after the Munich massacre at the 1972 Summer Olympics where the Palestinian terrorist group Black September killed 11 members of the Israeli Olympic team. This movie, dedicated to the slain athletes goes on with Avner Kaufman, a Mossad agent of German-Jewish descent who is chosen to lead a mission to assassinate the 11 Palestinians allegedly involved in the massacre.

The Charlie Hebdo Attacks which took place on January 7, 2015, depicts the story of two brothers belonging to Al-Qaeda in Yemen who stormed the Paris offices of the satiric weekly Charlie Hebdo, killing 11 people and injuring 11 others before killing a French police officer. Amidst a massive manhunt for the killers, an additional five people were murdered and 11 wounded in related attacks over the next two days, including a harrowing standoff between police and a third gunman, claiming allegiance to ISIS, at a kosher supermarket near the Porte de Vincennes in Paris. Drawing on exclusive access to hostages, survivors, police, paramilitary forces and intelligence findings and evidence, as well as never-before-seen footage and photographs this documentary spotlights the courage and resilience of Parisian police and citizens during the terrorist rampage across France. The documentary recounts the three-day ordeal that began with an attack by men acting in the name of Al-Qaeda in Yemen and ended with the first ISIS attack in Paris, a chilling precursor of other terrorist acts.