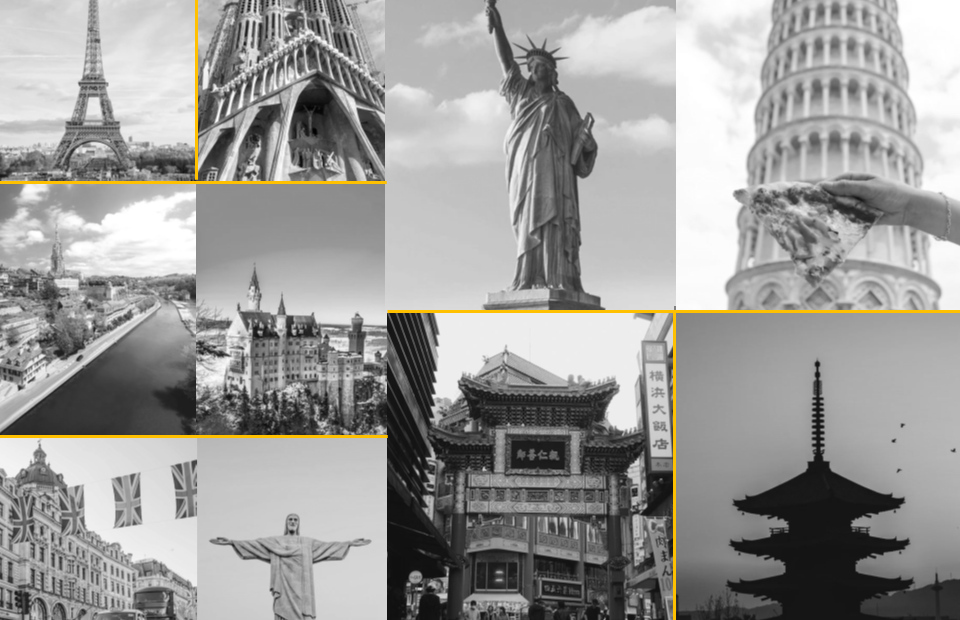 Top 10 countries with the most cultural influence

The list below comprises the ten countries that influence global culture the most. These nations set socio-cultural norms worldwide in fashion, gastronomy, entertainment, arts, and many other fields. This list of the globally significant nations contains information about their most notable achievements and foundations that made them culturally significant.

When creating this list, we intended to display here those ten countries that are the most culturally outstanding in terms of entertainment, fashion, happiness, influence, modernisation, and prestige.  The list does not reflect any political opinion of the authors.

Italy, located in south-central Europe, is one of the biggest cultural influencers around the globe. Its cuisine and art have a great impact upon the whole world. Wine, cheese, pasta, and pizza are all very significant elements of its culture and cuisine, which every country has implemented into their everyday life. Moreover, the Italian culture ‘produced’ Michelangelo as well as Leonardo da Vinci, who are profound cultural influences in arts. Fashion brands – like Valentino, Armani, Versace, and Gucci – which originate from this country have become luxury products everywhere. It is therefore inevitable to admit that Italy is one of the trendsetters when it comes to fashion, food, or furniture. All of these inventions are shaping world culture since the Renaissance and will continue to influence it for many years to come. In terms of international relations, Italy is a member of several international organizations; among them, the European Union and the United Nations. It is also a charter member of the North Atlantic Treaty Organization.

“The country of love”, located in Western Europe, is one of the oldest countries with an extremely rich cultural heritage – whose qualities extend all around the globe.  Paris, its capital city, is the most famous city for its modernity and fashion, a setting example for cities all around. One of the country’s prized celebrities, Coco Chanel – famously known as a fashion designer and businesswoman – has achieved wearing trousers fashionable for women, which resulted in her brand line to spread around the world like wildfire, and to this day greatly leads many fashion lines. Moreover, French wine and cuisine have a great impact on international gastronomy, as croissants, macarons, baguettes, and many more are all significant aspects of its culture and have been adopted by many. France’s reach extends around the globe through science, politics, economics, and culture. As for its international deal-making, France is a founding member of the United Nations and has a permanent seat on its Security Council. Additionally, it belongs to the European Union, World Trade Organization, the Organization for Economic Cooperation and Development,  as well as NATO.

Once being the largest empire in world history and one of the biggest conquerors, Spain planted its cultural seeds all around the world. Located in the Iberian Peninsula, Spain to this day shapes global culture. Velazquez, Goya, and Picasso set the standard through periods like Baroque, Romanticism, Cubism, and Surrealism. For decades, artists all around the world were inspired by these Spanish trendsetters. The music and dance of flamenco, as well as the globally renowned novel “Don Quixote” by Cervantes, are expressing how deep the country’s artistic heritage runs and  how they are a source of unity and national pride. Spanish cuisine popularized tapas internationally, a source for people to connect and share while dining. As of its international deal-making, Spain is a part of: NATO, the United Nations, the Organization for Economic Cooperation and Development, the Euro-Atlantic Partnership Council, and the World Trade Organization.

The United States of America is considered the greatest power in today’s world, having a major military, political, and economical influence on other nations. It also has a significant cultural effect upon other countries. Many people around the world want to live the “American dream” as seen in movies and TV shows. Setting trends with its influential entertainment industry, from music to films and TV series, Hollywood’s rule on the film-making industry is undoubted. Additionally, the great tech innovators emerge from the country, creating platforms such as Facebook, Twitter, Google, and Amazon – brands that drive the online environment where billions of people interact daily within these popular services, and social networks. The US is also the birthplace of jazz and Louis Armstrong,  one of the country’s most recognized and admired musicians. Moreover, America’s fast-food chains, such as McDonald’s and Starbucks, can be found in almost every single corner of the globe. As for its international relations, the US has a leading role in many of the most important international organizations, and was also one of the founders of the United Nations, NATO, and the World Bank.

An island nation in northwestern Europe, made up of England, Scotland, Wales, and Northern Ireland: the United Kingdom exerts considerable international economic, political, scientific, and cultural influence. Its capital, London, is one of the world’s leading financial and globally influential cultural centers. The nation has a long history of major contributions to the arts and sciences. It is additionally the birthplace of Shakespeare and The Beatles: the great influencers in theater and music all around the world. Notably,  the computer and the World Wide Web were also all invented by Brits. Moreover, the discovery of gravity, hydrogen, penicillin, and the development of theories in aerodynamics and natural evolution are all connected to the United Kingdom. The UK is widely referred to as prestigious, having some of the world’s finest universities and its residents taking pride in their ability to combine a strong work ethic, creativity, and an openness to change to produce innovation. Besides London, Edinburgh adds a lot to the country’s cultural influence with its hosting of the Fringe Festival which is the world’s largest arts festival, as well as being the ‘birthplace’ of Harry Potter. As of its international deal-making, the UK is a permanent member of the United Nations Security Council and is a member of major international organizations, such as the World Trade Organization, European Union, the World Bank, NATO, and the Group of 20.

Japan is located in East Asia, an archipelago country made up of four primary islands and more than 6,800 others. It is regarded as one of the world’s most literate and technically advanced nations. Japan’s culture today is known as extremely modern and influential from sushi, to fashion, to architecture – the country’s cultural impact can be felt all around the world. Many different forms of martial arts originate from Japan  which eventually have become widely popular around the globe such as: aikido, iaido, judo, and karate. The country has been long influenced culturally by its neighbors, however today it blends its ancient traditions with aspects of Western life. Japanese traditions within art – such as tea ceremonies, calligraphy, and flower arranging – also can be found in many different countries around the world. As of the international deal-making, Japan is a member of several international organizations, including the United Nations, the Asian Development Bank, and the World Bank.

The People’s Republic of China is home to one of the world’s oldest civilizations and is the most populous country on earth. Located in East Asia, China is considered as the second strongest economic power on Earth. The country is developing in an extremely fast pace  and its reach is available in almost every corner of the globe. China has the largest network of diplomatic missions around the world. Its soft power, mostly seen as the Confucius Institutes, is widely spread in Africa and many other countries. Besides the country’s current acts to spread its cultural influence, many other aspects are already implemented to most nations on earth. The Chinese food restaurants are an everyday view for the Western population, fireworks are an invention from the republic, as well as the “made in China” label on most products used is a common thing nowadays. As of the international deal-making, China is a member of several international and regional organizations, including the World Trade Organization and the Asia-Pacific Economic Cooperation. It has also been a permanent member of the United Nations Security Council since 1971.

The Federal Republic of Germany, located in Western Europe, is the most populous country of the European Union and possesses one of the strongest economies in the world. The country has long been a driving force in European affairs and continues to play an important stabilizing role within the European Union. Besides being a major player in the international field today, Germany influenced many by ‘producing’ some of the world’s leading figures in the natural and social sciences, as well as the arts. Ludwig van Beethoven, a world-famous composer was born in Germany. Immanuel Kant and Karl Marx who are highly influential philosophers also came from the country. Folk festivals remain popular in modern-day Germany, with the most notable being the annual Oktoberfest which attracts people internationally. Another notable characteristic of the country is that it is home to some of the most popular car manufacturing units in the world. Audi, Volkswagen, BMW, and Mercedes-Benz all have their origins in Germany and are being exported to many nations. As of its international deal-making, Germany is belongs to many major international organizations, including the Group of 20, NATO, the Organization for Economic Cooperation and Development, the United Nations, and the European Union.

The Swiss Confederation, a small country in Central Europe, affects global culture in many ways. The country produced multiple Nobel Prize winners and registered more patents per capita than most other nations. Prestige and wealth are both key characteristics of the country, as well as being one of the world’s wealthiest nations. The country has very low unemployment rate and a strong economy, which is powered by low corporate tax rates, a highly-developed service sector led by financial services, and high-tech manufacturing industry of which many countries are trying to follow and establish themselves. Switzerland is also famous for its neutrality; it has long been honored by its European neighbors, and during periods of conflict attracted some of the world’s greatest minds to immigrate, including James Joyce, George Byron, and Voltaire. Since the country is not part of the European Union, Switzerland, particularly Geneva, is a popular headquarter location for international organizations like Red Cross or the World Health Organization. As for its international deal-making, Switzerland is a member of the IMF, WTO, and World Bank.

Brazil, occupying about half of South America, with its many natural resources and one of the top agricultural, manufacturing, mining, and service sectors, is the top nation in coffee production, exporting to most corners of the globe. Moreover, Brazil is one of the main countries setting world culture in the field of entertainment. Its music, carnivals – such as the Rio Carnival – are all world-famous characteristics of the country. Recently, the country has also added a growing cinema industry to its arts and entertainment heritage. Brazil is also world-famous for its sports such as soccer and volleyball, producing multiple champions in both fields. As of the international deal-making, Brazil is a founding member of the United Nations and is an active member of major international and regional organizations, including the Group of 20, BRICS and the Organization of American States.