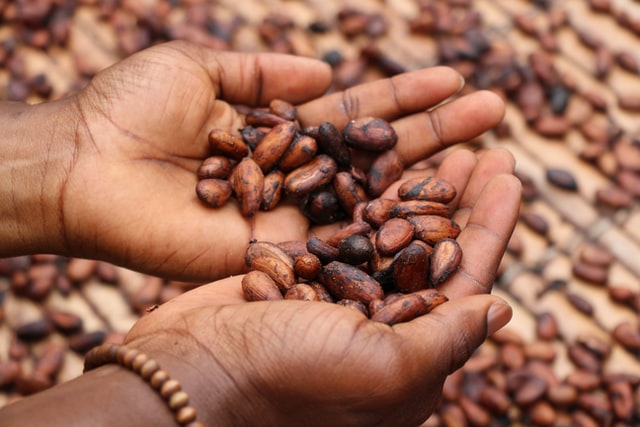 Child labour in the cocoa industry: the bitter side of chocolate

During the Mayan civilization, the cocoa bean was a sacred substance and considered as “god’s food.” Today, chocolate (which is a product of the cocoa bean) is eaten on a weekly basis and has become one of the most popular confectioneries in the world. According to the World Cocoa Foundation, over 3 million tons of cocoa beans are consumed per year. While we cannot imagine life without chocolate, this sweet treat comes at a great cost to those who harvest the cocoa bean – particularly child labourers in West Africa.

The cocoa bean is primarily grown in tropical climates, such as Western Africa, Asia and Latin America. Countries like Ghana and Côte d’Ivoire supply 70% of the world’s cocoa. Over the years, journalists and NGOs have exposed the prevalence of child labour in many of the cocoa-producing countries. In 2001, major chocolate companies such as Nestlé, Mars, Ferrero and Kraft Foods signed an agreement with the ILO to combat child labour in cocoa growing areas. The agreement, known as the ‘Harkin-Engel Protocol aims at reducing child labour by 70%, in both Ghana and Côte d’Ivoire. However, this agreement has not been as effective as people hoped. According to the 2018 Cocoa Barometer report, as many as 2.1 million children are working as labourers in West Africa. So, while there have been commitments to eliminate child labour, why does this problem still persist today? The answer is poverty.

In Western Africa, cocoa is a commodity product that is mainly grown for exporting. 30% of Ghana’s export revenue comes from cocoa, while in Côte d’Ivoire, it accounts for 40% of the country’s export revenue. As the chocolate industry has expanded over the years, so has the demand for cheaper cocoa.  According to Fairtrade International, while the living income is $2.51, cocoa farmers only earn 0.78 cents per day. As a result, child labour is often used in order to keep the prices low and competitive.

Children in Western Africa often face the harsh realities of rural poverty, which includes access to potable water, food security, lack of education infrastructure, lack of health services etc. Therefore, they begin working at a young age so that they can help support their families. Often, these children end up working on cocoa farms as they are told that ‘the job pays well.’ On the farm, child labourers are exposed to hazardous work such as using chainsaws to clear the forests or climbing up the trees and cutting down the cocoa pods using a machete. This large and heavy knife actually wounds the children – many of them have scars on their hands, arms, shoulders or legs from using this dangerous tool. Once the cocoa pods are cut down from the trees, they are packed into sacks. These sacks can weigh over 50 kilograms, and the children are forced to carry them through the forest.  In addition, the child labourers are exposed to toxic pesticides that are used when spraying the pods. These are all clear violations of human and labour rights.

Currently, with the ongoing COVID-19 pandemic impacting education and incomes, many families could resort to using child labour as a means to survive. According to a recent report by the ILO and UNICEF, “As poverty rises and schools close and the availability of social services decreases, more children are pushed into the workforce.” Even when classes do resume, there is a chance that some families may not be able to afford to send their children to school. This could lead to more children being forced into hazardous jobs.

That being said, governments need to propose some measures to combat the threat of increased child labour. This could include more social protection, more resources for labour inspections, the promotion of decent work for adults, measures to get children back into school, and perhaps reducing or eliminating school fees.

Furthermore, the cocoa and chocolate industry need to collaborate with West African governments to ensure that children in these cocoa growing areas are not working in hazardous conditions that jeopardize their health and development.

Lastly, we as consumers can play a role by being educated about the things we buy, including chocolate. We must demand that companies pay farmers a better price for their cocoa while also supporting efforts to ensure that children are safe and have access to education.