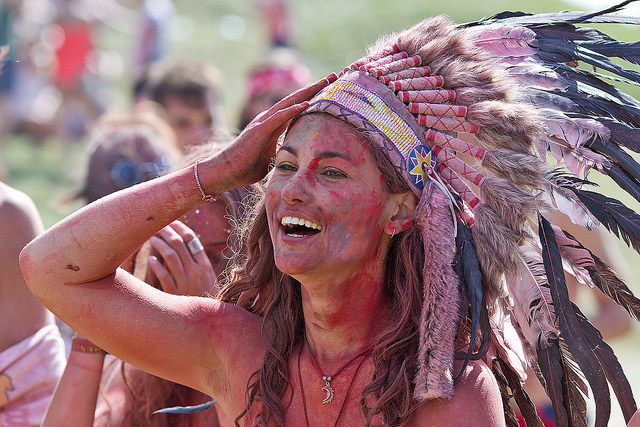 Cultural appropriation: from cultural exchange to adopting the heritage of the marginalised

Every Halloween, we have good chance of seeing white kids, college students, adults dressed as Native American or as people from “ghetto”, or people who have no real connection to India wearing red dots on their foreheads. Such mimicry has come under increasing condemnation recently and has been associated to “cultural appropriation”.

On the basis of the examples above, cultural appropriation can be defined as the unacknowledged or inappropriate adoption of the customs, practices, ideas, etc. of one people or society by members of another and typically more dominant people or society. Unlike cultural exchange, in which there is a mutual interchange, appropriation refers to a “particular power dynamic in which members of a dominant culture take elements from a culture of people who have been systematically oppressed by that dominant group”. Things like tea, gunpowder and pasta have been shared between different cultures throughout history but these “borrowings” are totally different from cultural appropriation, because they do not involve power and domination. In brief, cultural appropriation is not just about circulation, because after all, loaning is for example the rule of art, which doesn’t know any border.

I believe that, to understand the concept of cultural appropriation properly, it is a need to understand the historical background of colonialism. Indeed, the expression of cultural appropriation first appeared in English at the end of the 20th century, in the artistic domain, to talk about “cultural colonialism”. So, colonialism, or the systematic subjugation of one group of people by another, is at the heart of appropriation. Examples of colonialism have occurred throughout Asia, Africa and the Americas, usually with occidental countries as the aggressors. Thus, those countries which have a colonial past also have some colonial considerations regarding certain cultures or countries. The said considerations imply that sub-cultures are existing: dress up as “Indians” to imitate decimated Amerindians populations, or as an “African” to imitate a racist stereotype from a whole continent, etc., induce that some cultural traits are made to be caricatured for entertainment and trade. All of this is the result of colonisation, where a dominant group has claimed ownership of the land and its people. After that, when the powerful group continues to steal aspects of the non-dominant culture, it continues the economic oppression and disadvantage of that culture. Plus, cultural appropriation deprives the minority culture from the credits they should receive for some aspects of their culture, reinforcing the power imbalance with the dominant group, who is the one actually receiving the credits.

In brief, those inherited racist ideologies which characteristically portray an entire group of people, a race or ethnicity as simplistic, untrustworthy or violent, contribute to the spreading of reductive stereotypes. The example of Halloween illustrates that the dominant culture reduces something of cultural significance to a costume just so that the dominant group can have a bit of fun.  The problem arises when somebody takes something from another less dominant culture in a way that members of that culture find undesirable and offensive. The point is that the more marginalised group does not get a say, while their heritage is deployed by someone in a position of greater privilege – for fun or fashion, perhaps, and out of a place of ignorance rather than knowledge of that culture. And, most of the appropriations are insulting in a system where, for example, afro communities are politically, economically and socially oppressed. To see that afro hairstyles are justifications for discrimination in the world of work while some famous people wear those and sell tutorials is witnessing the capitalisation of some cultures by the dominants. This is not about cultural exchange when the minority communities are the ones which are always imitated or caricatured.

Cultural appropriation recently has been in the news due to a series of recent controversies which have brought attention to it, from white people wearing afro haircuts to white people doing blackface to disguise themselves. Fashion is often singled out as the biggest culprit when it comes to cultural appropriation. For example, in the last year, Gucci was criticised for putting turbans on white models, which was considered as a huge sign of disrespect, considering the fact that the turban is a symbol of faith and not a fashion accessory.