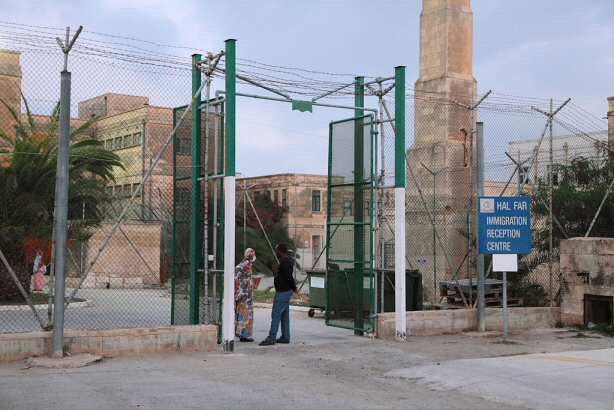 Because of its geographical position in the Mediterranean, Malta is receiving a very large amount of refugees as it is the first European outpost encountered by refugee flows from Northern Africa and the Middle East. Together with Spain and Italy, the small island has to bear the bulk of the incoming refugee flow.

Despite its small size and meagre population of 400,000, Malta is one of the countries receiving the most asylum applications in the world. Since the creation of Office of the Refugee Commissioner in 2002 Malta has received more than 15,000 refugees, of which according to the Human Rights Watch more than 90% are asylum seekers. The majority are from war torn areas in Sub-Saharan Africa. Partly because of EU policies, this situation is putting a lot of pressure on the island nation.

“Malta is the smallest state in the EU, and we are carrying a burden that is much bigger than any other country”, said the Maltese Prime Minister Joseph Muscat in Rome. Muscat called the EU out on leaving Malta high and dry after being criticised for wanting to send refugees back to Libya before allowing them to seek asylum. It has been speculated that this move was designed to bring attention to the failure of the EU to respond to Malta’s difficulties on Muscat’s part, who leads a centre-left party.

The EU needs to provide a response to its southernmost member states that have unwillingly been turned into Europe’s doorstep for illegal immigrants and refugees. The majority of refugees arriving in Malta only go through temporarily – the UNHCR estimates that less than 30% of the almost 20,000 Libyan refugees are currently still in Malta. However, several European countries refuse to take in refugees, meaning that many who attempt to leave are sent back to Malta numerous times, which means large amounts of people are kept in circulation, as they do not integrate into Maltese society either because they do not intend to stay in the long term.

Angela Merkel was the first to address the evident need for a new policy to deal with asylum seekers. The Dublin Convention from 1997, the legal framework for dealing with refugees in force, is arguably flawed and collapsing under the weight of new refugee influxes from Syria. It states that refugees arriving in Europe must seek asylum in the country they arrive in, which places the burden entirely on the southern border countries and has in practise meant that refugees have migrated further north anyway, where they have often been mistreated and hoarded into camps like Calais.

Instead, Germany has suggested a quota system with support from France, Sweden and Italy. This would be a much desired solution and show that the EU is capable of political and moral solidarity, but several countries are unwilling to accept this and some in Eastern Europe are in outright opposition to taking in any refugees.

Because of its location, many refugees end up in Malta unintentionally, the significant influx putting heavy pressure on infrastructure. Due to this heavy refugee traffic, Malta is forced to conduct search and rescue operations over a very large maritime area to spot the boats, many of which sink, killing hundreds every year. Similarly, asylum centres and border offices are overwhelmed.

Malta’s infrastructure and resources are not the only things under pressure. The traffic of asylum seekers and migrants is also reflected on a societal level. The composition of Malta’s society has drastically changed in two decades. For example, the fishing town of Marsa has a population of some 6,000 and has taken in around 1,000 asylum seekers. While such cases do not thankfully always give rise to xenophobia, the change in social composition is a dramatic shock to such a small community.

Malta recently hosted the EU summit on refugees and migration, in which several constructive decisions were made, in the form of sending aid packages with warm clothing and resources to refugees in cold climates, re-uniting families and setting up remote migration centres. It was also decided to re route refugee flows away from the busiest points: Italy, Spain and Malta. Partially this would involve investigating the possibility of Latin America and Asian countries receiving some refugees, but the most problematic outcome of the summit is undoubtedly the decision to send refugees back to Libya.

The UN warned against this on the basis of the awful conditions and human rights infringements in the living standards for refugees in Libyan camps.

Malta needs the EU’s help to cope with the consistent refugee influx it is receiving. The EU countries need to show more solidarity and deal with the migration issue on a state level.

This lack of a consistent state-level wide response to the refugee issue is a part of a bigger problem for the EU. It has proven difficult to achieve political solidarity in the EU – something which has shown to be much more difficult than economic integration. Indeed, it seems regional crises like the just distribution of refugee asylum seekers, or a global financial crisis or a Greek state bankruptcy pertinently bring out a lack of solidarity between European states.