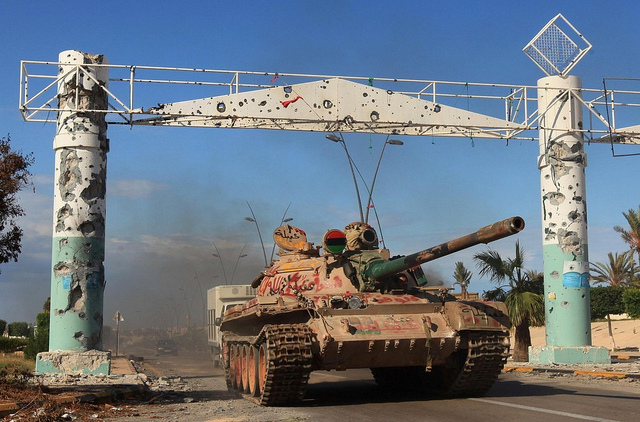 Preventing the return of a failed state in our backyard. How to address the Libyan stalemate?

After the fall of Muammar Gaddafi in 2011, Libya’s political and institutional transition is still underway. The creation of an unstable national unity government turned out to be inadequate to tackle economic and security problems of the North African country. If on the one hand it is worth mentioning that the European Union is backing the Libyan western government supported by the United Nations, it is also true on the other hand that Serraj’s leverage is undermined by Tobruk government’s authority and by its international ties: Russia and Egypt, along with the United Arab Emirates and France – even if the French government is rebalancing its policy towards Libya after the killing of French military advisors in July 2016 – are, indeed, bolstering Libya’s eastern government.

This situation of extreme uncertainty is worsened by the presence of hundreds militias that jeopardize the future creation of a National Army under the control of the central government. In this context, the disaster of the economic crisis, the action of many criminal organizations and the presence of the so called Islamic State (IS) – now fenced in Libyan deserts – pave the way for the proliferation of terrorism in the region and for the growth of illegal migration, thus threatening EU’s social stability and security. Libya’s stabilisation is of fundamental importance for the European foreign agenda because it is directly related to the stability of EU member countries. Therefore the EU has the duty – due to its geographical position and to the urgency of the issue – to implement security strategies to address the Libyan political crisis.

The EU faces three main exigencies in order to secure its southern neighbourhood. First and foremost the EU should reach an agreement between the UN-backed government in Tripoli, led by Serraj, and the Tobruk “strongman” Haftar, which represent the Libyan eastern government, with the aim of establishing a single, efficient sovereign authority. Before talking about elections, pluralism, and decentralisation of the authority, it is indeed necessary that the authority exists. The next step for the EU should be that of implementing a long-term economic strategy for the North African country, thus building consensus through economic restoration. The humanitarian situation within the country is catastrophic: 1.33 million of people are in immediate need of humanitarian aid and around 439.000 children need some sort of protection. Last but not least, the EU should fight terrorist organisations within Libya both militarily and diplomatically. Therefore increasing efforts in combating people smugglers business and all the other criminal activities such as arms trafficking in order to cut all cash flows towards jihadists and, in the meantime, threatening to undertake political and diplomatic countermeasures against countries that provide shelter and support for terrorists could be included in the European strategy.

These three urgent priorities should be intended also to stop the mass exodus of both refugees and economic migrants from Libya to Europe. The Mediterranean route needs to be closed. Hence the EU should focus on the implementation of some important steps to better handle the crisis: moving south European borders from Sicily to Libya, thereby calling on the UN to establish the identification system of refugees in the Libyan territory; negotiating with migrants’ countries of origin the repatriation of those who have illegally crossed the Mediterranean Sea; training the indigenous personnel that will constitute the Libyan navy, which will be part of the Libyan army of the future central government.

Geopolitical perspectives must be taken into account. The head of the Eastern Libyan National Army, Khalifa Haftar, has acquired relevance and legitimacy both presenting himself as a bulwark against the rise of IS and gaining the support of regional and international states such as Egypt, Russia and, in an indirect way, France and Britain. Even if it is true that the EU has been relying on the UN-backed government since it was established, the creation of a stable government could not be achieved without Haftar’s involvement. Therefore negotiations between the two Libyan governments should strongly be promoted by European authorities. It is undeniable that only an agreement among the factions, aimed at creating and strengthening the central political authority, can avoid a Libyan failed state.

That being said, what about if the two Libyan governments won’t show the willingness to cooperate and finally stabilise the situation in their country? The EU cannot allow another collapse of Libyan institutions. In that case the European policy towards Libya should involve also other measures to prevent another post-Gaddafi scenario. These measures could for example involve compellent acts – as the one implemented almost one year ago by the Italian government with the dispatch of naval boats in Libyan territorial waters to combat illegal migration, regardless Haftar’s threats of opening fire against the Italian navy – in order to urge the Libyan competent staff to bring this situation of uncertainty into an end. This strategy should be taken in accordance with the intervening foreign powers, so that the respective influences on Libyan factions effectively work. The abovementioned scenario can be hampered by the high likely peaceful stance of European public opinion. Thus EU politicians should explain to their respective electorate that avoiding a failed state in their backyard is in their national interest. Hence, a huge media campaign should be carried out by the European governments in order to be domestically strong, thereby preparing their public opinion to a potential military involvement.