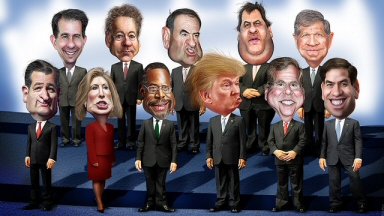 The American election – a country in political crisis

The American campaigns leading up to the Republican and Democratic National Conventions are not just a hot topic in America, or among political pundits, the campaigns have become an international spectator sport. The garish and cartoonish personalities of the candidates, the outlandish accusations and arguments, and the complicated and undemocratic nature of the delegates and super delegates has piqued the interest of the entire world. This election’s bizarre crop of candidates has drawn attention to the myriad of issues plaguing the American democratic system, with the candidates seeming to represent a different aspect of the problems in a strange caricature of the American political life.

The American campaigns leading up to the Republican and Democratic National Conventions are not just a hot topic in America, or among political pundits, the campaigns have become an international spectator sport. The garish and cartoonish personalities of the candidates, the outlandish accusations and arguments, and the complicated and undemocratic nature of the delegates and super delegates has piqued the interest of the entire world. This election’s bizarre crop of candidates has drawn attention to the myriad of issues plaguing the American democratic system, with the candidates seeming to represent a different aspect of the problems in a strange caricature of the American political life.

Hillary Clinton’s bid for the Democratic nomination, and Jeb Bush’s short term push for the Republican, highlight a bizarre tradition in the American political life. The fact that we have “dynastic ruling families” in a democratic system is difficult to explain. Europeans have often questioned me about this phenomenon because it seems undemocratic for a country where all are created equal, yet, America has a history of electing generations of the same families into office. Some political analysts believe it boils down to name recognition; in a system where Americans have to vote for every public official, they are too bothered by the constant elections and political campaigning to deal with it, and name recognition becomes valuable. Others credit the fact that America has a huge inequality gap, with several notable families being wealthy enough to join a sort of elite social grouping. Combine that with how expensive it is to run a campaign in the US (investopedia has quoted that so far Donald Trump has spent 1.8 million of his own money to fund his campaign), and it severely limits who can run for office, thereby creating the potential for dynastic family rule. It calls into question whether or not America is really a place where everyone’s input matters, or whether it is simply a country for the rich by the rich.

Trump raises his own strange issues in the campaign. The rest of the world is stumped as to how a supposedly free and democratic country could ever garner such large support for a candidate as loud, racist, and obnoxious as Donald Trump. After Trump made a campaign promise to ban Muslims from entering the US, the firm Landmark, which owns over a 190 department stores in the Middle East, Afghanistan, and Pakistan, decided to remove all Trump products from their stores. His comments calling Mexicans rapists, and promising to build a wall on the border that Mexico will pay for, has also incensed America’s Southern Neighbors. Mexico is one of the US’s largest trading partners. Mexican legislators are trying to get Donald Trump banned from their country over the remarks. The Parliament of the UK also debated banning Trump and, although they took no vote, all of the politicians were appalled by Trump’s speech, labeling it hate speech. There seems to be no end of reports that Trump rallies are filled with blatant racism, misogyny, and hate speech.

The reaction of the international community calls into question whether or not the US needs stronger laws against hate speech, and whether or not that would interfere with the democratic process. A recent article by the Canadian National Post [1] mentioned that Canadian laws against hate speech are much stronger than American ones, and Trump’s speech calling Mexicans rapists could have been prosecutable in Canada. It is very difficult to pass laws limiting any kind of speech (even hate speech) in the US due to the very liberal interpretation given to the first amendment right to free speech. Yet, given the violence that is so common at Trump rallies, it seems time for America to reconsider its laws, and crack down on hate speech.

Clinton’s presidential push draws attention to yet another problem area in the USA, the underrepresentation of women in politics. A woman has never held the role of president or vice president. Woman gained the right to vote across the country in 1920, and the movements towards full gender equality in the 60’s and 70’s allowed the greater representation of women in the workplace, yet the US has never had a large representation of women in politics. According to the globalist, 63 of 142 countries have had women as heads of government\state in the 50 years leading up to 2014.[2] The US is one of the few democratic countries not on the list. In a ranking of Women represented in national legislatures, the US comes in as the 91st country, meaning that almost half the countries in the world have more female representation.[3] That kind of gap between male and female representation is unacceptable. It highlights why women’s health and reproductive rights are constantly being fought over in the US. Women lack the political representation required to fight the passing of laws that are out of touch with the needs of women. While electing a woman as president will not exactly solve the representation problem, it would be a start.

Bernie Sanders’ rise into prominence reflects a growing dissatisfaction with many of the previous norms of American political life. Since the Cold War, the word socialism became dirty and un-American. The American dream romanticized the idea of the hardworking individual who pull themselves up by their bootstraps without help or handouts. Yet, in modern America, with number one cause of bankruptcy in the US being medical bills, the shrinking of the middle class, and the increasing gap between the rich and the poor, many Americans are changing their opinions on that dirty word. Sanders’ identification as a democratic socialist would have been political suicide in previous elections. Now it is a popular classification as more and more Americans are feeling the burdens of college debt and medical debt. They see how many Europeans are not struggling with those same kinds of debt because their countries use tax revenue to fund socialized health care systems and free or low cost universities. Sanders gained a lot of popularity with his proposals to close tax loopholes for companies and the super rich, and to use that money for free college programs, health care, and other socialist type programs. His widespread success shows that Americans are changing their minds on social welfare programs.

In general, the some of the issues that have gained a significant amount of press time have little to do with politics and a lot to do with the candidates’ personal lives. The candidates have been annoying voters with an endless series of vapid personal attacks that have nothing to do with their opponents political abilities. The attacks on the Republican side have made headlines simply due to their vulgarity and lack of political salience. Marco Rubio lost votes due to a distasteful statement  mocking the size of Trump’s hands, in a bad allusion to his manhood. In the same speech he also called Trump orange, sweaty, and made fun of his hair. The Republican debate in March was described as having “substantive discussion[s]… sandwiched between long bouts of personal attacks.”[4] Rubio, however, defended himself by claiming he was simply responding to the litany of personal attacks from Trump, who talks more about the appearances of other candidates than about their policies. He has laughed at the campaigns of Carly Fiorina and Hillary Clinton because he claims that they are not beautiful, and that women who look like they do becoming president is laughable. Trump has also threatened the wife of Senator Ted Cruz, called former runner Ben Carson a child molester, and in general belittled anyone who has criticized him.

The Democratic candidates haven’t been angels, yet their political attacks has been notably less vulgar, and have had more to do with actual politics, yet the candidates are still treating each other in a very negative way. Bernie Sanders has run a series of negative ads focused on Hillary Clinton in the lead up to the April primaries.[5] For the democratic side though, this has been one of the less personal races in recent history. The candidates kept things fairly clean, and the debates lacked the obscenities being slung at the republican debates.[6] Sanders has notably attacked Hillary as not being a competent candidate for president, although this is not a particularly new or interesting attack. What attacks there are have been much more subtle, like Sanders hinting that Hillary is not a good liberal for having attended Trump’s wedding, and assuring that he doesn’t speak to Trump, implying that those who do are less worthy.[7] Hillary has also purposely misquoted Sanders in attempts to make it seem that he does not take women’s rights issues seriously, in an attempt to discredit him with voters.[8] Yet, on the democratic side, most of the dirt does stick to questioning the others’ stance on the issues.

The wide use of personal attacks isn’t limited to the presidential elections, and is not a new phenomenon. It has been a basic part of American politics for generations to try to make the other candidates out to be bad people. It is problematic because it takes the focus away from the issues and onto childish squabbles over who did what and who make what mistakes. Politicians are humans too, they may not always have the best personal life. Some issues like financial corruption, racism, or serious legal troubles could actually influence how capable a person is to run for office, but issues like marital fidelity, hand size, and personal appearance, do not affect the ability of a person to govern a country. What is most shameful is that these kinds of personal attacks greatly appeal to the American voter, as it creates a good spectacle, which has also captured global interest for unsavory reasons.

The election shows most of all that America is facing a difficult time, the differences in personality and policy platforms of the candidates show how stressed Americans are feeling about the future of the nation. Racial tensions are running high after the riots in Missouri, the European terrorist attacks, and the Black Lives Matter movement. Americans are drowning in debt, struggling with easily preventable health problems, and viciously battling over women’s and LGBTQA rights. The pressures in American life have been mounting and combining, leading to an intense, fierce, and ugly battle for the presidential spot. The candidates and the campaigns seem to illustrate the new and historical problems inherent in American Politics. Let us hope that Americans will make a choice that will be good for them and good for the international community, and that they will not give into fear and hate.