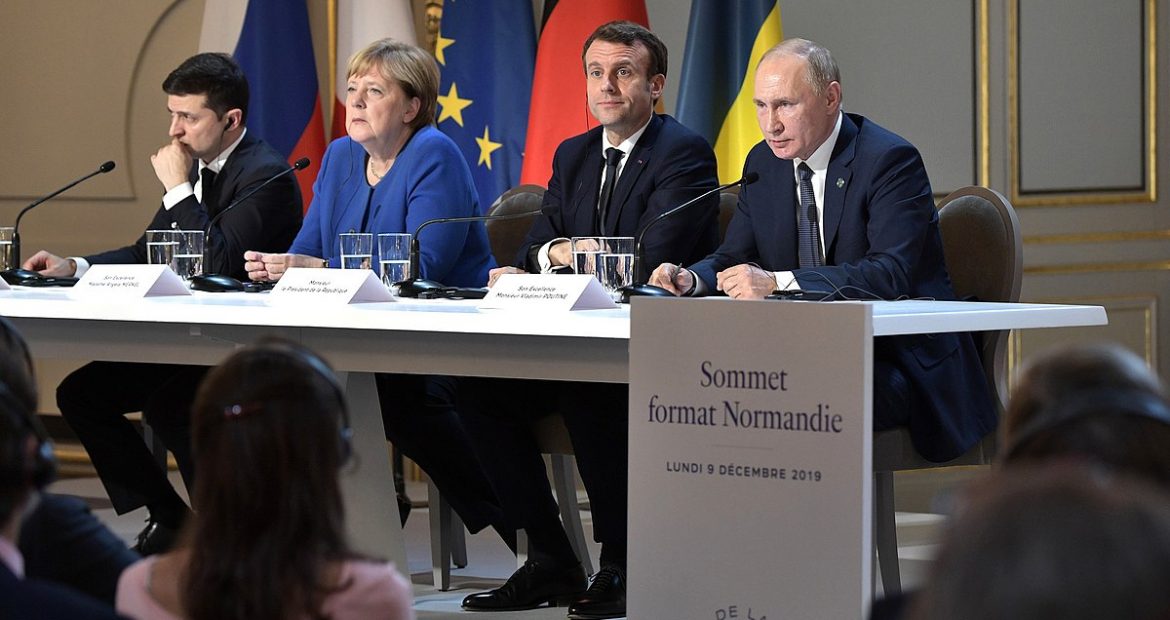 The issue of sovereignty in implementation of Steinmeier formula

The current international system follows a principle of state sovereignty which entails that no matter size, population, material capabilities, all states are equal as states. They have exclusive right to control internal affairs within its territories and any external interference of another state is considered to be an act of aggression. Russian military interference in Ukrainian internal affairs is a definition of such aggression, however, Kremlin refuses any accusations related to its military presence on the occupied territories of Donbas.

In 2014 the armed conflict in Eastern region of Ukraine called Donbass broke out. Russian troops invaded Donbas in April 2014, after seizing Crimea, and helped pro-Russian separatists proclaim independence from Ukraine in regions of Donetsk and Luhansk. Kremlin insists on its non-involvement despite numerous evidences from OSCE and United Nations proving the opposite.

The war had called for an international backlash with majority of the states including the US and the EU Members supporting Ukrainian side. In order to help resolution of the conflict, Normandy Four format was created to establish platform for negotiations. Thus far there have been six official meetings of the state leaders from Ukraine, Russia, Germany, and France. Normandy Four is an unofficial meeting format of four states where they discuss Russian armed aggression in Eastern Ukraine, it is essential to the international perception of the conflict, since it clearly outlines positions of the main actors in the war and the way they perceive the conflict.

Latest meeting of the political advisors from to the Normandy Four happened in Berlin on 11th of September. No significant geopolitical progression was made, however, the sides aim to continue meetings till the agreement on more contentious issues will be reached. Meeting was centered around implementation of the agreement reached during latest summit in Paris where Zelensky agreed to Steinmeier formula after the ceasefire is reached. Summit took place in December last year and yet fighting still goes on. Steinmeier formula expects a full ceasefire, withdrawal of weapons with observation by OSCE, restoration of the borders, and creation of a law giving Donetsk and Luhansk special status and ability to hold local elections which currently goes against Ukrainian Constitution and the interests of the civil society in Ukraine.

Steinmeier formula offers a theoretical solution to the conflict in Donbas and while it looks feasible of paper, it would require Ukraine to lose a lot of its control in the region, and possibly can lead to a loss of territory. Russian side states that signing of Steinmeier formula “was a step in a positive direction” and the reasons for that are not hard to predict. Russian side expects Ukraine to implements reforms before Russian military leave the territory. Ukrainian civil society raised protests with a slogan “No to Capitulation!” aiming at a newly elected President to keep up to the “red lines” of what is acceptable and what cannot be given up for the Ukrainian side to maintain its sovereignty: 1. Ukraine is a unitary nation, so no attempts at federalization to give a special status to occupied territories will be implemented in Constitution, 2. Ukraine is an independent state and no outside power can interfere in its internal affairs, 3. There will be no compromise with regard to concession of any territories.

Next meeting was planned to happen in March 2020, but due to the coronavirus pandemic it has been postponed. Latest meeting of the political advisors signifies the effort at moving forward to resolution of the conflict and more negotiations on the issue. The war has been going on for six years already and international attempts of peaceful negotiations did not bring measurable results. Numerous international organizations including United Nations are calling attention to the human rights abuses on the occupied territories especially during pandemic, however, no positive change is yet to be seen.