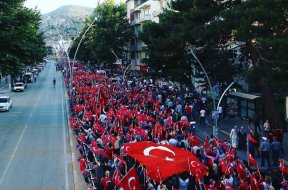 Friday night on July 15, 2016, I was brainstorming with my colleague at the ICRP on the news headlines that interest us most. Suddenly, news on the then ongoing military coup attempt in Turkey appeared on our social media news feeds.

Confused and shocked of what was going on, I picked up my mobile phone and found out flooding messages from friends and relatives both in Turkey and the Philippines asking me information of what was underway in Turkey and some asking for our safety. To get informed, I logged in onto the online sites of several Turkish TV channels. I then got access to blow by blow updates on the coup attempt. And the most interesting news headline of the month we were talking about was there, in front of us, being broadcasted live on our laptop’s screen.

That night, I competed with my sleep, sat down and watched the ongoing coup attempt. I did not want to sleep while my host country for more than four years was under a political unrest. Before they have become viral on social media, I got to see scenes from the coup attempt I thought I could only see on movies and/or TV. I knew that TV networks were on target as an anchor from the seized state-run TV network, TRT, was forced to read the declaration of martial law at gunpoint. CNN Turk was also able to broadcast live the moments they had to face when a group of soldiers invaded the station until it got temporarily offline. Out in the open were dramatic scenes someone with a compassionate heart may not bear to witness. At the edge of the famous Bosporus Bridge, members of the coup plotters fired back at the crowd advancing for resistance; tanks rolling over civilians had hit some to death; fighter jets could not getting enough of bombing the parliament buildings had dropped fires over the masses guarding the parliament. More of these scenes, some can be more brutal, are widely circulated on social media.

Although they were overshadowed by the violent scenes of the uprising, there were also scenes that made me hopeful of a bright aftermath of the coup. In tens of thousands, people from all walk of life walked to the streets and squares to defend their nation. Contrary to what some media have reported, there were men and women, with or without moustaches and head scarves present during the rally. Turks and Kurds, supporters and non-supporters of the ruling party, secularists and Islamists alike had joined the people’s resistance. For eyes to savour, we saw united civilians defeated the well-equipped combatants that night.

Following the incident, several news outlets published their thoughts of what had happened. Some remained objective in expressing their opinions, while others chose what they do best and impressed the public with their clearly one-sided narratives and conspiracy theories. And some leaders from influential countries sent their politically-driven messages out in the air.

Now that the coup was declared a failure. I ask, was there anyway the coup would succeed?

As of writing, the coup has killed 240 people, 173 of those were civilians, and has injured thousands. There are now more than 8,600 people held suspects of involvement in the coup attempt. Whether they were pro or anti coup, whether they are proven guilty or not, these people have families, relatives and friends mourning for them and depending on them. What will happen to them? These alone will not make the coup a success.

So, who succeeded and who failed?

The people have succeeded defending the country from a possible martial law. They have successfully showed the world that there is real strength in unity. That unity prevails over enmity. Specifically, they have proven to a certain degree that Turkey’s first-elect President Recep Tayyip Erdogan has the support of people who elected him for a legitimate government. That they are ready to die for his cause.

My long-time mentor, who is now residing in Istanbul, shared her heartfelt reflection of the coup. She believes that young Turkish people who otherwise cared little about their country have been awakened to their duty of love and protection of their nation. She also mentioned that the hope the failed coup has sparked among the Muslims and the oppressed. Yes, the mainstream media has been reporting of narratives from secularists who feel a sort of isolation brought out by the failed coup. But they forget to take notice of the Muslim majority who has long been suppressed under the secular constitution in the country. She went on further saying that the Turks’ successful prevention of the coup inspired hope that the people of countries like Egypt and Syria can get their act together and defeat military rule.

Though there were many instances where in civilians shielded the surrendering soldiers from the people’s wrath, some failed to control their anger and gave verdict right away through whipping, kicking and punching on the bewildered-looking soldiers, some of them were just mere victims of the circumstance. Along with those power-hungry generals who masterminded the coup; the silent population who wished for the success of the coup; those journalists who attempted to confuse the public through their biased; irresponsible and politically-driven coverage of the issue, those civilians who did not wait for the authorised body to handle the surrendering innocent soldiers have failed.

Asked of how the coup attempt has affected her, a sister from Turkey, who teaches in a private institution giving religious sciences to students from Africa and Asia, shared that it (the coup) has made her check herself, made her realise she has become too comfortable; and that she “should care more and work harder for Islam and nation.” Another friend, who is asked what keeps him stayed on the square since day one, reiterated that “Turkey is very important for Islam, that’s why we can sacrifice our lives, but we cannot sacrifice our government.”

So much damage has been done, people got killed, wounded and detained. And with the housecleaning the government is doing after the coup, we hope the government would be more solid and purged of its secret anti-democracy, anti-government elements. I dare say it’s too early to raise the success flag. Not until justice and peace be restored not only in Turkey but in all parts of the world, we all will continue to experience failures.