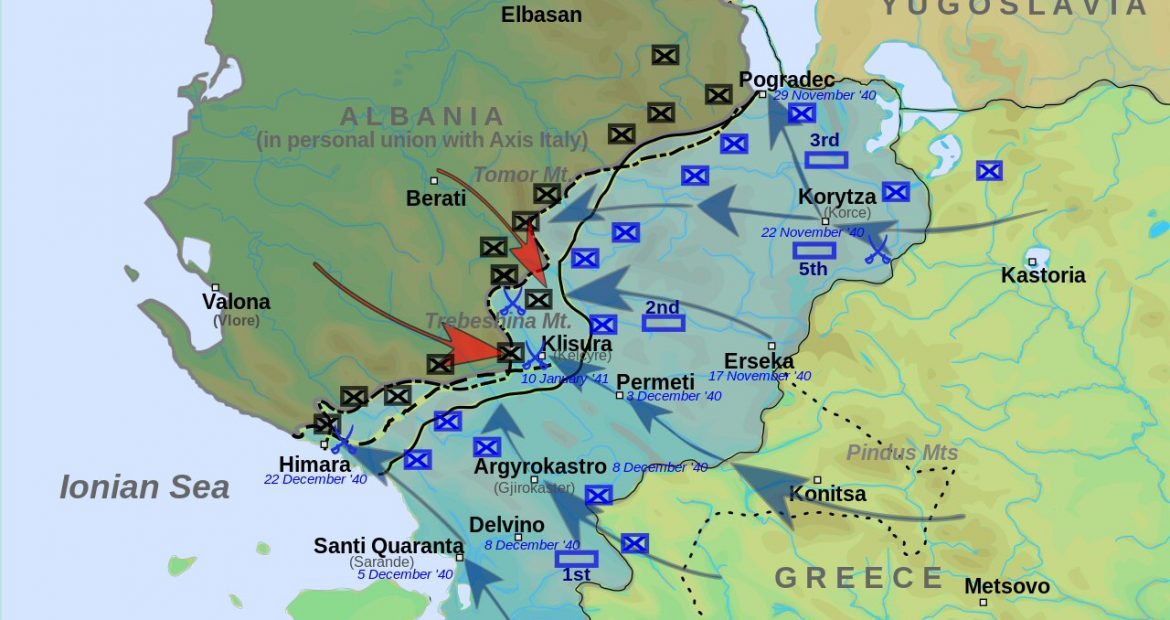 Why the Greek-Albanian Law of War should not exist?

Referring to the Albanian-Greek state relations, it is clear that in certain periods they have experienced tides and ebbs. The confrontations began at the time of the violent emergence of nationalisms, when political interventions in the life of communities began and when Greek foreign policy was personified by the irredentist doctrine of Megali Idea – the “Great Idea”. In particular, from the middle of the 19th century, Greek intentions for expansion towards Albanian lands were institutionalised, to be concretised at the dawn of the last century, at the London Conference of Ambassadors (1912-1913), when the Ottoman Empire was rapidly moving towards final collapse.

Under what circumstances was the law of war declared with Albania, what was its content and what was intended through it? On October 15, 1940, Italy declared war on Greece and on October 28 1940, attacked it militarily. On November 10, 1940 the Greek Metaxai government promulgated Law Number 2636/1940 “On Legal Actions of Enemies and Seizes Conservative Assets of Enemies”, otherwise known as the Law of War with Albania. An objective and impartial analysis, based on historical truths and legal interpretations of the acts of domestic law of both states and of international law, proves that the then Greek alibi, about the dilemma of the state of war, has been false and has already been conclusively refuted in favour of peace. Athens, referring to the Italo-Greek War, accused Albania of being an aggressor state that had attacked it militarily. The Greek government presented to the international bodies the formal request for a return to the discussion of territorial claims, by advancing the thesis of “state of war” with Albania and the necessity of concluding a peace treaty between the two “warring” countries. It was thought that raising the Albanian issue as a whole, in post-war forums, could provide opportunities for the implementation of previous plans. A complex propaganda, political and diplomatic game began, the aim of which was to internationalise the “state of war” between Greece and Albania. It was accompanied by intensive efforts to create an opinion in favour of the Greek and, in this case, the exposure of evidence and arguments on which the Greek accusation against Albania was based on its alleged participation in the war alongside fascist forces.

Let’s start with the first motive, the declaration of war by the Albanian government led by Shefqet Vërlaci, invoked as an “argument” of genuine legal character. From the outset, it can be said without hesitation that it is extremely difficult to find lasting international legal support for this claim. The declaration of the Vërlac government has no legal value, because after April 7, 1939, Albania was an occupied country, without any legitimate body with decision-making prerogatives. The so-called Albanian “government” and “parliament” did not even have the minimum of legal attributes to make decisions and to be authenticated for representing Albania at home or abroad. Its position was already determined by the lack of sovereignty and freedom of action in international relations. It had neither international personality nor legal-international ability to act. Consequently, it could not formally exercise the rights of the subject, such as declaring war, ending peace, and so on.

There is also no other claim on the participation of the two Albanian battalions in the Italo-Greek War. The forcible recruitment of citizens of countries occupied by the occupying armies, to be used in combat operations in other countries, always proves to be a common practice. According to the basic principles of international law, they were considered and treated as regular soldiers of the armies, in the ranks of which they fought, and not as soldiers of the country they were from.

Let’s talk about World War II. From any point of view, the issue between Albania and Greece was not motivated to have a “state of war”. The so-called “state of war”, to which Greek political circles, scholars and publicists have repeatedly referred, was merely a fiction without any real legal value, was merely a pretext to maintain a constant state of tension in Albanian relations. Greek, which chauvinist circles hoped to use as a motive to return to the revanchist past.

In this view, under normal circumstances, regardless of what has been stated or published in Greece over many years, it would not be necessary to undertake any legal formality to remove the so-called “state of war” with Albania, because in reality it did not exist. Even if we abstract for a moment from the facts, analysis and justifications of a historical and legal nature presented above, there are a number of documents and events and situations of a genuine international legal nature that confirm that it is groundless and unfounded constellation of acts of Greek legislation for the so-called state of war with Albania. From all of the above, the “law of war” should not be considered legal, nor should it be considered an act in force. But, from a formal point of view, we must say that the Greek side has not taken the appropriate legal steps to abrogate it in its official form.

This era has opened modern visions for the restoration of the climate of coexistence, on a stable basis, for the asphyxiation of anti-historical tendencies, extremist and chauvinist tendencies, etc., so that Albanianism and Hellenism are not seen as two things that exclude each other, but as realities that can and should coexist. Greek and Albanian governments must always keep this sublime aspiration in mind and respond with actions that respect the peace, justice, neighbourliness and territorial integrity of both countries.