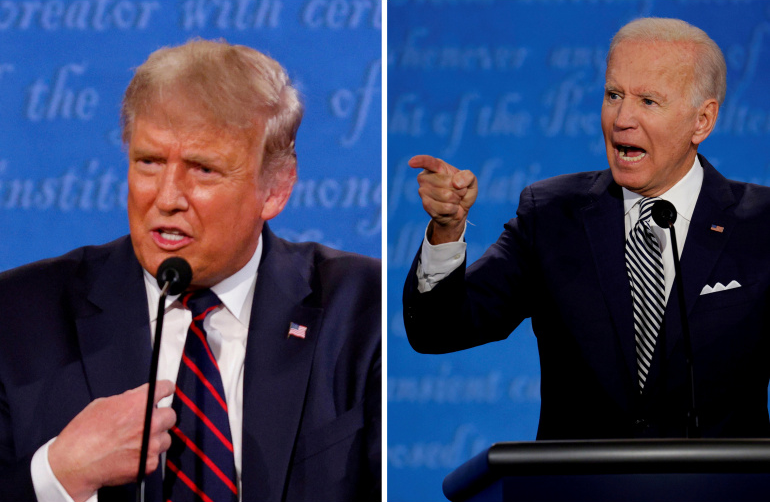 The next American presidential elections are to be held on 3rd November 2020 and they are challenging the current order. President Trump has been in power for the past presidential term and now is trying to keep his position for the second, protecting his stand during the presidential debate.

Presidential debates are an essential part of the election process. Two main candidates from the Republican and Democratic parties usually face each other during the debates and discuss the most controversial issues. Therefore, debates are approached with a great deal of seriousness.

Debates of this year, however, lacked seriousness and were made up as out of mutual insults. After the first debates, the Commission on Presidential Debates announced that there is a need for an “additional structure … to ensure a more orderly discussion”. So far Trump has not approved the changes and structural change seems unlikely.

The electoral system also had to be changed due to the coronavirus pandemic: voters are now able to vote through the post, a change that the current President publicly stated he does not approve of. During the first debates, he was also confronted with a question of whether he will accept the outcome of the elections, to which he did not provide a meaningful answer.

International reaction to the debates also has not been positive. British journalists in Guardian stated that the debates were a “national humiliation” putting an emphasis on Trump’s inability to conduct a civilized structured debate.  French Le Monde called the debate a “terrible storm” pointing out constant mocking and interruptions of the opponent.  Russian official media reported that there was “no constructive dialogue” and Chinese state-run Global Time adding that the debates were “the most chaotic debates ever”. International reaction to the American electoral process is evidence of the importance of the outcome for the international community.

Trump’s decisions in the international arena have been directly contradicting the role of a hegemonic leader of the international community with Trade Wars with China, meeting with North Korean leader, and lastly, quid pro quo in Ukraine serving as examples. Apart from that, Trump has put an effort into worsening the position of the United States in the multinational partnerships and institutions that previous administrations put so much effort into building, for example ceasing participation in the Paris Agreement on climate change mitigation.

Trump’s foreign policy of turning back to its allies in the international community, opens doors for new potential candidates for the hegemonic position. Chinese Belt and Road Initiative is capturing more and more power from Asia to Europe and Chinese leaders are becoming more present on the international stage while the United States steps back.

Lastly, it is important to mention that so far, the United States has set an example with its freedom and American values of democracy and liberal order to the world. After the end of the Second World War, the United States put an effort into creating world organizations based on cooperation and norms: the UN, WTO, IMF, IMF, and financing European recovery that resulted in creation of the European Union. During his presidential term, Trump withdrew from Trans-Pacific Partnership, Iran nuclear deal, and threatened to abandon the WTO. He continually questions the need for NATO and cuts his involvement in the UN. The US managed to win the Cold War by engaging the world in rule-based cooperation and liberal institutionalism. Trump’s drastic turn to isolationism threatens the stability of the system that was built by the previous administrations. With the ongoing epidemiological crises and Trump’s turn to isolationism, there is a pressing concern of a structural change in the international arena. Elections of 3rd November 2020 will set a direction of development not only for the United States but also will set a valuable example for the international community.

At this moment it seems like the main concern of the American people is not who gets elected for the next presidential term, but whether American democratic institutions will be able to survive the change in the electoral process due to the pandemic and increasingly anti-democratic claims of the current President.