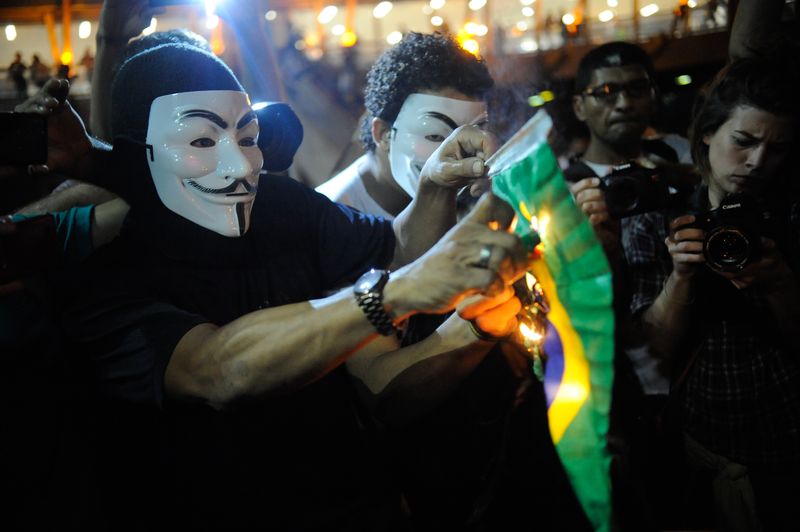 What followed was the World Cup blues. The humiliating public defeat of the two Latin American giants Brazil and then Argentina not only unfolded old rivalries between the nations, but also revealed two severely troubled economies; a fact that had been covered up by the euphoric atmosphere around the World Cup in the last months.

Brazil and Argentina, two nations which had fought for supremacy in Latin America for so long and eventually managed to overcome centuries of rivalry and mistrust through diplomacy and the common establishment of MERCOSUR in 1991 – a model of regional integration and economic cooperation à la European Union; Brazil and Argentina, with the largest economies in Latin America, the one member of the strong growing BRICS association, the other one formerly one of the richest countries in the world with one of the highest GDPs per capita in the Southern hemisphere; Brazil and Argentina, rich in resources, culture and history, internationally respected and admired for their ability to grow stronger even after severe economic setbacks as in the 1980s; Latin American role models, beloved tourist destinations.

And now, Argentina and Brazil in the headlines, with news which might be surprising, but not for those who refused to be blinded by the magic and the Brazilian samba rhythms around the World Cup.

In a week’s time, Argentina could face another default. The current situation brings back painful memories of the great depression from 1999–2002 which shattered the Argentinian economy and Argentinian lives. Now, facing a major setback in a long legal battle against investors, Argentina is forced to come to an agreement with the investors until the 30th of July, which it managed to put off from month to month for the last years. Christina Kirchner’s government sees itself as a victim of “extortion” by hedge funds “vultures” and refuses to pay the investors unless they agree to a restructuring of the debt. It is not the first time that a Latin American country finds itself in such precarious position: in 1996, a man called Paul Singer, CEO of the hedge fund Elliott Associates L.P., bought defaulted Peruvian debt for a reported $11.4 million. In 1998, a US court ruled that one could not buy debt with the sole purpose of suing the debtor. Elliott won a $58 million judgment in 2000, when the ruling was overturned. Peru found itself in its worst economic crisis in history from which it still has not fully recovered.

It is the same man, who has now led the charge against Argentina over one of the history’s largest ever sovereign debt restructurings. The Argentinian government accuses him of buying their bonds at a deep discount. His focus on buying such defaulted bonds, looking for legal loopholes in jurisdiction to get a full return on those assets, is indeed not illegal, but neither morally correct. Argentina has recovered from the mega default of 2001, but the economy is still weak and inflation is rampant. The payback of the investor’s terms would lead to claims from other holdouts on about $15 billion of debt in Argentina – which is the equivalent to more than half the foreign currency reserves held by Argentina’s central bank.

Brazil, meanwhile, is facing the sheer magnitude of public anger about the costs of the World Cup, with economic forecasts which are anything but positive. The tournament looked like a great opportunity for Brazil’s economy – for some, it was a wasted opportunity: while annual inflation is creeping up towards 7 per cent, most economists now forecast GDP growth this year of little more than 1 per cent – due to such negative numbers and turnover all across its sectors, some predict that the Brazilian economy could fall into a recession this quarter. Some of the worst signs come from Brazil’s auto sector, which has suffered from tightening consumer credit at home and a near-economic crisis in neighbouring Argentina, the industry’s main export market.

Dilma Rousseff’s government, preparing for presidential elections in October, knows about the unpleasant side effect of such numbers. Following the example of the million marchers who hit the streets in protests against the country’s decision to spend $11.5 billion on soccer stadiums and World Cup-related projects rather than on basic needs such as health and education protests can now be seen frequently on the streets of Brazil’s major cities, accompanied by social unrest, as among striking workers in Rio during the Cup. Knowing, that the World Cup is only delaying the economic fall, Brazilians are fearful of a return to the hyperinflation that gutted salaries in the 1980s and 90s – and with the 2016 Olympics in Rio ahead, the government’s spending priorities are once again provoking harsh criticism.

The outbreak of violent riots in Brazil shortly after the 7-1 defeat by Germany on the 8th of July revealed bleak prospects for the national stability and Brazil’s majestic position in South America. Just like for Argentina, the World Cup did not bring the desired happy ending this time, while other Latin American countries, such as Colombia, which recently surpassed Argentina as Latin America’s third largest economy, also won the Fair Play Award in the World Cup this year.