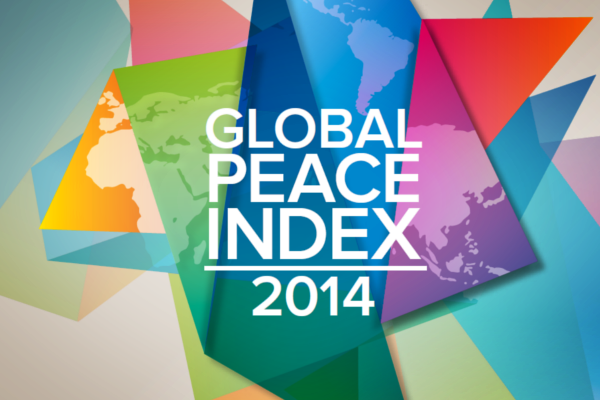 The fact that the world is becoming less peaceful is not a nice one. People would try to challenge this fact by saying that we are living in the most peaceful century of human history and that the most war-prone zone of past times, the European Union, as we know it today, has developed into a paradigm of peacefulness and mutual cooperation between former hostile nations. Yet, according to the Institute for Economics and Peace, there are indisputable indicators that there is in fact less peacefulness in our world today than there was a decade ago.

The fact that the world is becoming less peaceful is not a nice one. People would try to challenge this fact by saying that we are living in the most peaceful century of human history and that the most war-prone zone of past times, the European Union, as we know it today, has developed into a paradigm of peacefulness and mutual cooperation between former hostile nations. Yet, according to the Institute for Economics and Peace, there are indisputable indicators that there is in fact less peacefulness in our world today than there was a decade ago. Such indicators are ranging from a nation’s level of military expenditure to its relations with neighbouring countries and the percentage of prison population, as well as the number of displaced people or refugees, the likelihood of violent demonstrations, terrorist activity, etc. – in total 22 indicators are supposed to show that, since 2008, 111 countries have deteriorated in levels of peace, while only 52 have improved. The GPI ranking is making use of other indexes, such as the Social Progress Index (SPI), which includes four of the 22 GPI indicators to calculate scores for the Personal Safety component. Among the 10 most peaceful countries, 7 are in Europe, with Denmark and Iceland leading the list, while the 5 least peaceful countries in the world include Syria, the Ukraine, Egypt, the Central African Republic and, above all, South Sudan, with the most severe deterioration in peace since the outbreak of armed resistance in 2013. The top three indicators of deterioration are terrorist activity, the number of external and internal conflicts fought, as well as the number of displaced people as a percentage of the population. Generally, the trend towards more intrastate rather than interstate conflicts between nations can be noticed – a fact which is not surprising looking at the most recent conflicts in Ukraine, Syria and South Sudan.

The Global Peace Index reveals global trends in peace and conflict but also serves as a tool to identify early indicators of potential conflict. Thus, among the countries which are likely to experience an increase in violence in the short and medium term, are Zambia, Haiti, Liberia and Bosnia and Herzegovina, but also Argentina, Nepal and Qatar. The study also examines the potential financial and political impact of an increase in violence on those nations, which is useful for both policymakers and stakeholders. The fact that 500 million people living in countries at risk of instability and conflict is quite alarming; yet the fact that 200 million of them live below the poverty line, is disturbing. Leaving aside factors such as global warming, limited resources and overpopulation, the GPI is in fact providing us with a pretty bleak prospect of world peace in the near future.

And here, one has to start thinking critically. How far is the GPI really looking at indicators of positive peace, such as the status of women and children, the integration of minorities and different ethnicities or the GINI-coefficient, measuring the income distribution among the population. How come, that a country such as Qatar, in which women are not allowed to drive a car or to get on an airplane without male company, is in a “very high state of peace”, and therefore ranked higher than, for example, France? It is also a justified question why Chile, with the shocking number of 26% of Chilean women who suffered at least one episode of violence by a partner, according to a 2000 UNICEF study is ranked the most peaceful Latin America country. Can the GPI really ignore the fact that over 50% of the population are facing the daily threat of violence by their partner of husband? Also, why is Romania, whose Roma population constitutes one of the largest minorities and is being treated as such, ranked on 35 even before the UK, and why does the alarming rise of nationalist and far-right parties in countries such as Austria not influence its high ranking on number 3 of the list? One could further argue that Russia does not deserve its very low ranking, even after a country such as South Africa, which shocks with the highest HIV infection rate in the world and where a woman is being raped every 17 seconds. Why is a country such as Burkina Faso, among the ones with the highest FGM rate or a country such as Bolivia, which recently legalised child labour at the age of 10 and suffering one of the worst poverty rates in Latin America, ranked higher than Colombia, which is currently experiencing the peaceful resolution and integration of the FARC, and further showing extraordinary improvements in security and the role of women. Moreover, how come that a country such as Bulgaria, with one of the highest corruption rates in the world, running through all layers of society and politics, on rank 30, and therefore in a “high” state of peace?

These are only a few questions one should ask oneself when using numbers and figures of the GPI and referring to them. What is indeed very useful are certain findings indicating international changes, such as the fact that interstate violence is in decline, showing evidence of the effective use of diplomacy as a tool to enhance peace among nations. However, the indicators which are used by the Institute for Economics and Peace have to be critically examined as well as the driving factors of change, which lead to the quickly changing nature of peacefulness. Concluding, it is a risk to develop summary measures of complex concepts and making them universally applicable to peace and conflict studies. And it is certainly a risk to think oneself safe when living in a country with a high peace index. As John F. Kennedy said: “Peace is a daily, a weekly, a monthly process, gradually changing opinions, slowly eroding old barriers, quietly building new structures.”