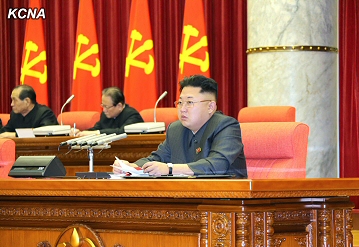 North Korea – the Aggressor or the subject of aggression?

Over the past few years, the Western media has had a tendency to portray the Democratic People’s Republic of Korea as a country that seriously endangers global security. What Western newswriters keep forgetting to demonstrate, however, is the severity of the political and military pressure Kim Jong-un and his nation have been under and the lack of reality behind the implied North Korean threat.

Ever since the end of the Korean War in 1953, North Korea has been striving to recover from its losses. The process has been rather unsuccessful so far – one might rightfully blame the country’s incapability of rationally using and distributing the money its budget provides. It is unquestionable that the communist nation has sacrificed way too much on the altar of maintaining a strong military that can keep strict order and secure the dictators’ regime. In 2006, the world was shocked when North Korea tested its first atomic bomb. Since then, the country has reportedly separated enough plutonium for around 4–8 nuclear warheads in total, but all experts agree that the DPRK lacks the technology to successfully aim and lob nuclear missiles at the US, or even at its southern neighbour.

On the other hand, for the past half century, the United States has spent billions of dollars on monitoring the DPRK as stringently as possible. In the aftermath of the Korean War, the US started to plant nuclear warheads in South Korea for use on a pre-emptive basis against the North, violating the 1953 Armistice Agreement, which strictly prohibited the introduction of new weapons into Korea. During a period of 33 years, more than a thousand warheads were delivered to South Korea, and (officially) they were only withdrawn in December 1991. Still, the US hasn’t given up on its threat of nuclear war directed against North Korea – apart from keeping 27 joint military facilities operational in South Korea, it has continued to have major North Korean cities under its scope, targeting them from US continental locations and from American strategic submarines. Today, North Korea is more closely watched by US spy satellites and planes than any other country on earth.

The difference between the nuclear capabilities of North Korea and the US needs to be underlined: in 2013, opposed to the former’s approximate “arsenal” of 4–8 warheads, the USA possesses over 5,000 nuclear warheads, including tactical, strategic, and non-deployed weapons. These data also provide reflections of the development of the economy and the military of the rivals.

It is also interesting to take a close look at the two nations’ diplomatic approach towards one another. Back in 2000, Kim Jong-il’s second-in-command flew to the US where he met with President Clinton and his secretaries of State and Defense. They set up the signing of an agreement in which North Korea would promise to end its missile production and testing program and the US would declare that it recognized and respected the sovereignty of the DPRK. With President Bush voted into power later in 2000, however, the agreement was never signed, as the new US leader stated that North Korea could not be trusted as a negotiating partner and cut all talks with Kim’s officials. After 9/11, he right-on declared North Korea was a part of “The Axis of Evil” alongside Iran and Saddam’s Iraq. Then, with incumbent President Obama in power, the new administration said the US would not reopen talks with North Korea until it turned away from nuclear weapons.

Today, with North Korea having been condemned as a war-mongering nation, a menace to the American Homeland, a “threat to World peace” by the global media, it might easily slip one’s mind that the DPRK very well knows that it would sign its own death certificate if it attacked either the US or South Korea. Just as I know that I would most probably never beat Usain Bolt in a 100m race, young Kim Jong-un – even though his rhetoric needs much to be desired – is perfectly aware that a country that can barely feed its own citizens has no chance against the world’s leading power.

The next step should be taken by the Obama administration: instead of continuing its policy of sanctions, military pressure and “no talks” towards North Korea, the US should consider trying to negotiate (with the possible assistance of China and Russia), and work towards a peaceful solution that everyone, including the DPRK, would benefit from. Maybe for some it seems unbelievably utopistic. For me it seems rather reasonable and attainable. One thing is for sure: any process in the issue mostly depends on the attitude of the US.