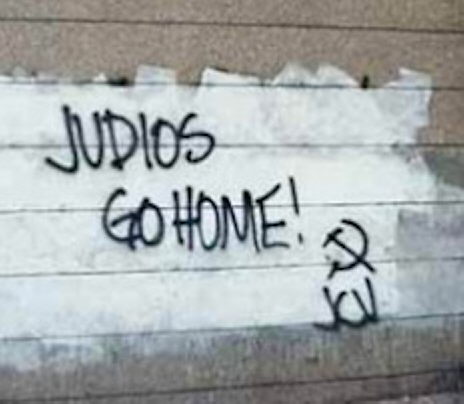 The anti-semitism has accompanied the history of Jewish people constantly since the Jewish nation’s creation. Basically no other nation has experienced so many hardships than the Jews, who throughout history had so many times become “uncomfortable citizens” for the rest of the society, victims of various absurd accusations, prejudices, discrimination, persecution and organized pogroms. However, despite of multi-generational oppression, the Jews managed to maintain their specific identity even to this day.

The historical experience proved that anti-semitism should be generally perceived as a social phenomenon that forms a stable component of all human communities. Anti-Jewish hatred occurred in different time periods and geographic regions in various forms and intensity. There could be clear manifestations of animosity in the form of individual hatred to a concrete person or to the Jewry as a whole, but also seemingly latent anti-Semitism. The latter was usually explicitly expressed by society after deliberate campaign against Jews on the basis of certain hidden pretext. Anti-semitic tendencies intensified and peaked mostly in difficult times of economic and political instability and Jews often served as a universal culprit and originator of all the unhappiness.

Generally we can identify four main resources of anti-semitism, which seem to play a significant role in modern-day anti-Semitic hatred, as well. These are religious, anthropological, economic resources and certain absurd accusations that Jews have faced throughout history. Religious roots of anti-semitism are mainly linked with the creation of new religions- Islam and particularly Christianity- whose attitude to the “old Jewish faith” has been from the beginning negative. This fact stemmed mainly from the refusal of the Jews to convert to “new and better” Muslim and Christian believes. However, the central reason of theological anti-Semitism originated from the creation of the Christian religion, whose medieval leaders accused the Jews of killing Jesus Christ. Another source of anti-semitism derived from the religious platform is the theory of chosenness of the Jewish people. The mentioned theory can be interpreted in different ways, however it has usually been interpreted very negatively by other beliefs. The negativistic explication of the theory has largely led to isolationism and disposal of the Jewish community from the rest of society, perceiving Jews as an alien and dangerous element.

Also the economic factor – especially the notable Jewish impact on the financial sector through the predominance of Jews in the so-called the liberal professions – contributed to the generation of the Jewish antipathy. The economic factor is also connected with psychological motives of the anti-Jewish hatred, particularly distrust and jealousy.

In terms of anthropological resources of anti-semitism, in the 19th century the Jews started to be considered primarily as a race with typical biological features. On the basis of social Darwinism have emerged various racial theories that attempted to degrade the qualitative value of the Jewish race. The idiomatic interpretation of these racial theories has gradually led to the creation of discriminatory measures targeting the Jewish society. Racist theories also essentially influenced the political thinking of Adolf Hitler and his Nazis policy that ultimately indented to completely destruct the Jewish race. As we all very well know, the hateful persecution of Jews finally culminated in the tragic events of the Holocaust during World War II. In spite of the clear evidence of the bestial treatment of Jews in the form of murders and massive violations of human rights during the Holocaust, the anti-semitism has still definitely not been a dead phenomenon. This is evidenced by the existence of a large number of neo-Nazi groups that demonstrate racist slogans of the German Empire, requesting the Jewish genocide. Sympathisers of these anti-semitic groups are probably not aware of the tragic consequences of Holocaust, not even of the key motives of its outbreak. Anti-semitic spirit, however, appears not exclusively among members of neo-Nazi groups, the vast majority we might consider fanatical crowd often unaware of the historical anti-semitic continuity, but also among representatives of different social groups, including intelligence. Despite of the fact that nowadays, the promotion of anti-semitic ideas is in many countries “de jure” crime, it is difficult to prevent the proliferation of these racist ideas. The reason is that “de facto” the mentioned protection in many cases fails or is completely absent, as secret anti-Semitic organizations, periodicals or Internet articles still exist and operate and their authors and supporters is difficult to detect and accuse.

The fact that crucially affected the development of the Jewish history, is the Jewish nomadism and the matter that the Jews for two millennia, until the creation of the Jewish state of Israel in 1948, had been a minority without its own state, integrated into majority societies. This Jewish nomadism, which was often designated as parasitism, has become one of the rigorous anti-semitic accusations. The Jewish diaspora and evident Jewish extensive impact on different social spheres is related to vision that Jews seek to establish the Jewish world domination. In this concept, one of the most controversial anti-semitic beliefs is based on the opinion, that despite the ancient discrimination and persecution, the Jews have managed to gain dominant influence in global politics by controlling not only leading political, but also economic functions and the media. This perspective refers in particular to the United States, where the majority of Jewish immigrants found their home right after Israel after the World War II.

The direction of the contemporary anti-semitism is impacted also by the behaviour of Orthodox Jewish groups that advocate the seedy theory of chosenness of the Jewish people, often referring to Holocaust. Their attitudes can be described as ostentatious and provocative. Manifestations of this kind lead ultimately to the degradation, contempt and questioning of the relevance of Holocaust. We can therefore conclude that fundamental branches of Judaism also contribute to the antipathy towards Judaism as a whole. On the other hand, it is needed to mention, that fundamental fractions exist not only in Judaism, but in almost every religion and in general, most Jews worship their faith moderately.

Especially vigorous anti-semitism dominates in Muslim countries due to historic Israeli-Palestinian conflict, which is a source of reciprocal hatred and xenophobia between these targeted ethnic groups. Moreover, it also creates negativistic attitudes towards both states from the rest of the civil society.

The current political tensions between Iran and Israel because of Iran’s nuclear program, also contribute to the acceleration of the number of anti-Judaists. Many political leaders, but also laymen, however, consider the current hostile Israeli attitude towards Iran as a pretext for provoking military conflict fuelled by Israeli power interests strongly supported by the United States. For the sake of this fact, the Jewish state is assessed negatively by the public not only due to religious, but also political issues. There are even opinions, that Israel represents the only element actually threatening global peace.

To conclude, it is almost impossible to suppose that anti-semitism could once be a dead concept. Multiculturalism will clearly be a prevalent paradigm in the future. We can therefore assume that xenophobic manifestations in multinational states will escalate, and hence anti-semitism will probably remain integral part of human society. However, it is necessary to control and limit its spread and manifestations to guarantee intense “de facto” and “de jure” protection of Jewish, as well as human rights in general, and harmonious coexistence of Jews with the rest of society. It is important to guarantee that the bloody events of the Jewish history will not reoccur anymore. Constantly high attendance of Auschwitz and other labour camps indicates public’s interest in the Jewish issue. Tragic destiny of many Jewish people who became victims of the rage called Holocaust evokes empathic sympathy and regret by the majority of human society. Not only Holocaust, but also the entire Jewish history should become a clear memento reminding how thin can be the line between humanity and cruel ruthlessness.