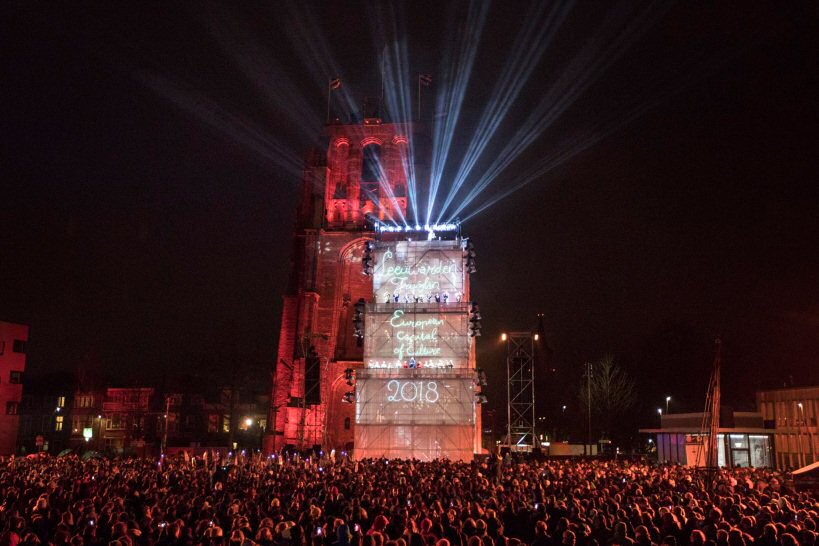 Reflections on the opening ceremony of Leeuwarden 2018, European Capital of Culture

The night of the 27th of January I found myself among thousands of people, despite the strong wind, rain and cold, walking in the streets of Leeuwarden towards one of its main squares. The reason for the gathering of so many visitors from every part of the Netherlands, as well as many other European countries, in the provincial capital of Friesland, was none other than the opening ceremony celebrating the initiation of cultural activities in the city that had been selected, along Valetta (Malta), to be the European Capital of Culture for 2018.

The European Capital of Culture (ECoC) initiative, called European City of Culture until 1999, was proposed by French and Greek ministers of culture Jack Lang and Melina Merkouri, and was implemented for the first time in 1985. The value of the idea lies on the fact that culture should play a key role in European integration, no less important than politics and economy. The aforementioned concept was designed in order to demonstrate the richness, uniqueness and diversity of cultures in Europe, while presenting at the same time certain values and cultural features European citizens share, forming thus among them a sense of belonging to a common cultural area. Meanwhile, the cities that would be granted the title would have the chance to invest on cultural policy in the long term, recreating their image in a more lively and artistic way both for their own inhabitants and visitors, attracting the international attention and boosting their tourism. After four decades of successful implementation, nowadays the ECoC title is given every year to two cities, which in turn for a period of 12 months focus on organizing a series of cultural activities.

For Leeuwarden, a quiet city that stands out culturally for being the capital of a province with a particular identity based on its unique language, Frisian, becoming visible among the cultural metropolises of Europe was a great challenge. After months of preparations being visible in every corner of the city center, on the night of the opening ceremony every spectator was full of expectations. Undoubtedly, the show (simultaneously performed in three separate squares) was not of lesser quality. The creators, taking advantage of the city’s center structure, placed on the top of surrounding buildings bands and orchestras that created quite an atmosphere with their music, while innovative light projection art and theatrical choreographies performed by children were taking place. A few technical difficulties that showed up during the ceremony did not affect the general mood, although they did stir up some criticism in the media the days that followed. After the official song of the project, Seis oere thús (Home at six o’clock), was presented and King Willem-Alexander and Queen Maxima of the Netherlands made an appearance, the ceremony came to an end.

As an individual, attending for the first time an ECoC event, the ceremony left me somewhat puzzled. Not regarding the spectacle, for what was presented was quite entertaining, but more in matters of whether a true representation of those unique cultural features one could find only in that specific area of Europe were part of it, cultural features that would justify the choice of the city. Actually, apart from a few references to Frisian culture (like the entrance of the main singer on a black horse or a short version of the traditional anthem played between other songs), the exact same show could have been staged in another city of Europe, with the exact same success. Sharing my point of view with a group of locals I soon found out that I was not the only one having this confusing impression. Some of the people, including me, believed that the show, although it incorporated important messages based on widely shared European values such as equality, respect in pluralism, friendship and acceptance (covering thus its European dimension), somehow lacked character as it failed, to a certain degree, in representing culturally the actual city it was set in. Of course anyone could point out that something like that to happen in just one night would be impossible, and he/she would be right. What could be discussed, however, is where the emphasis in the organization of such an event should be laid on.

As has been stated many times by the organizers, Leeuwarden 2018 is all about the future, a positive redefinition of its cultural life; and it should be. But this future does not necessarily mean breaking ties with the past. In a fast paced environment of constant changes, like today’s modern societies, one could find meaning in his/her cultural heritage. Unique regional identities, expressed in the context of their tradition, could have an impact of great value in this charming “mosaic” of different cultures that is Europe. Unfortunately, nowadays progress in the cultural field is often being mistaken for a change towards the standards set by a modern mass pop culture that could be easily understood by everyone. But what would be more valuable for a European Capital of Culture than to communicate its own distinctiveness; a distinctiveness reflecting its community and traditions and not an abstract pluralism dictated by political correctness. After all, that was what Melina Merkouri had in mind when she said back in 1985 that “the idea is to know each other better, to talk about culture and exchange. We have a cultural past and a cultural future”. And one can be sure that Leeuwarden, with its unique cultural traits, has the potential to contribute to this future.