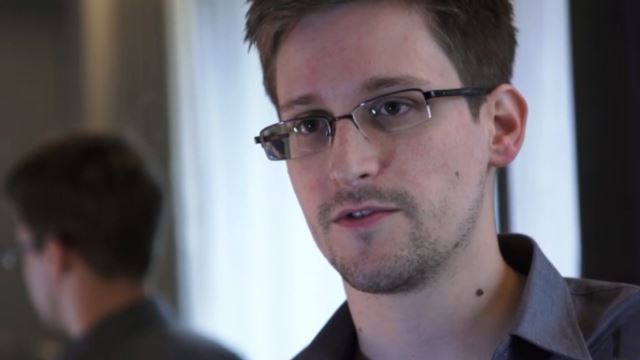 The Snowden-case: facts and analysis

Edward Snowden. Screenshot of the film Prism by Praxis Films

Edward Snowden is on the run through the globe. Arriving in Moscow in June, it is doubtful whether his journey will continue. Revealing top-secret data of US intelligence agency, NSA he is highly wanted by the Obama-administration. As a matter of fact there is no extradition treaty existing between the two superpowers, so Putin refuses to hand over Snowden to the US. The scandal is extremely embarrassing for the Unites States, not to mention the serious costs, it will inflict on the government. The question is how the deadlock can be solved.

In May 2013, Snowden fled to Hong Kong from his Hawaiian residence with 4 laptops containing data of the NSA’s interceptions of telephone and internet communication as well as of internal information of the agencies operation. The 30-year-old former technical contractor, who worked for the National Security Agency and also for the CIA, leaked the information in a Hong Kong hotel to Glenn Greenwald, journalist of The Guardian on May 20th. His revelations are among the most remarkable breaches in NSA security in the history of the Republic. After gradually uncovering parts of his secret data, he boarded the flight to Moscow with the help of Wikileaks’ journalist, Sarah Harrison on June 23rd, where he is still stranded in the terminal of Sheremetyevo International Airport. Meanwhile the United States has invalidated Snowden’s passport, hence he can’t leave the Russian Federation, so he has recently applied for temporary refugee status to Russia. He also requested refuge from 27 other states, but only three of them – Bolivia, Nicaragua and Venezuela – indicated that they were willing to provide political asylum for the computer analyst. He accepted Venezuela’s offer, however he can’t take advantage of it for the present due to his lack of a valid passport. His future plans include settling in Latin-America; however he rather aims to receive a temporary document in the short run, which enables him to freely move throughout the Russian Federation. According to anonymous sources, Snowden has already received the documents from the Russian Immigration Office necessary for gaining the temporary refugee status on July 24th, and may be able to leave Sheremetyevo Airport shortly. There is no extradition treaty in force between Russia and the US, therefore the FBI-agents working at the US-embassy in Moscow do not have the right to arrest Snowden. If he receives the documents for a political asylum, he will be able to live in Russia, and to travel abroad, e.g. to South-America, however this is quite unlikely because of his fears from being caught by US intelligence service agents.

Snowden revealed numerous pieces of information regarding the telephone and internet communication data collected by the NSA, as well as the operations and programs used by the agency in order to fulfil its goals to be able to observe virtually any citizen of the world. It turned out that the NSA intercepted several tens of millions of American’s phone conversations with reference to a court decision. According to Snowden’s leaks, the agency also observed the data traffic of giant Internet companies and services, such as Microsoft, Google, Yahoo, Facebook, YouTube, Skype, AOL, Apple and PalTalk via its PRISM system. However, most of the affected firms intensely exclaimed against these accusations. It came to light that the British intelligence agency (GCHQ) also used PRISM to collect data, and recorded the traffic of international telephone and Internet network cables, which transfer huge amounts of information. In addition, GCHQ intercepted the telephone and Internet data traffic of participants of the G20 summit in London. The NSA observed Hong Kong and China, for instance computer systems of Chinese telecommunication companies, and performed cyber-attacks against Tsinghua University, China’s educational and research centre. They also targeted Hong Kong’s Internet service provider company, Pacnet. The NSA spied against several institutions of the European Union in Europe and in the United States, intercepting EU’s offices based in Washington, just as the EU’s agency to the UN in New York. The number of embassies and diplomatic missions observed by the US adds up to 38, including target-countries such as Italy, Greece, and what is more the United States’ regional allies like Japan, South Korea and India. Furthermore the NSA observes data traffic of the optical cables running at the bottom of the oceans with the aid of its program called Upstream. It was also unraveled that Microsoft has been cooperating with American intelligence agencies long since in order to conduce to the interception of users’ communication. Microsoft denied the allegation that it provided full and limitless access to its services to the NSA, however on the other hand the company remarked that it operates in absolute compliance with the legal commitments in force in the US. Snowden also alluded to the fact that Western European countries have been cooperating with the NSA for a long time, yet they showed signs of outrage publicly after the outburst of the scandal. It is assumed that German spies use NSA-methods to analyse information acquired from the Middle East.

According to former NSA director, Michael Hayden, Snowden’s leaks caused serious damage in three major ways to the US and to American companies. In the first place the revelations have the detrimental effect to provide America’s enemies with information on the superpower’s intelligence tactics, techniques and procedures. Moreover the unraveled data gives an insight not only into concrete pieces of information, but also into the internal mechanisms of the NSA, how it operates, and how it is built up. As Glenn Greenwald puts it, Snowden’s disclosures are equivalent with an instruction manual of the NSA’s construction. Secondly, American businesses will also suffer severe damage just for observing the rules of American law, because users of Internet and cloud services may not entrust big companies to store their data, when it is known, that the government is capable of intercepting it. The third harmful impact of Snowden’s activity to the US is that the government may lose the people’s confidence, as the unraveled information shows that the superpower can’t keep top-secret data disguised.

According to reports, Snowden’s lawyer, Anatoly Kucherena has given him Dostoyevsky’s and Chekhov’s works to study Russian literature and culture, which is a sign of the leaker’s acculturation in Russia, just as an indicator of the state’s willingness to authorize Snowden’s settlement in the country. It is questionable though if the young man will ever dare to leave the Russian Federation, which means, that he presumably paid a high price for his actions, losing his homeland, residence, girlfriend and probably even his family for quite a long time, if not forever. Nevertheless, the whistle-blower’s leak will probably prove to be the most costly one in the history of the United States.

Snowden’s leaks are also relevant to us, individuals as far as our privacy is concerned. In the era of the Internet, none of us is safe; we have to coexist with the growing amount of interception, being potential targets of intelligence agencies throughout the world. The balance between privacy and security seems to tilt towards far less private sphere due to the enhanced activity of intelligence agencies. The Internet provides a vast field suitable for collecting information without number, as do companies via their websites by observing the users’ activities in order to identify them, or to offer them services. The era of privacy is fading, but this process is natural in the terms of Internet usage, if we take into account that on sites like Facebook or Twitter users provide the world with personal data regularly, including comments, photographs, videos, etc. Thus as we enter the world of the Internet, we expose ourselves to losing our privacy. Snowden’s leaks are significant, but they won’t change the countries’ surveillance practices at all. Espionage activities will exist forever, as they are tightly attached to the national security of a state, and indirectly to ours, civilians.