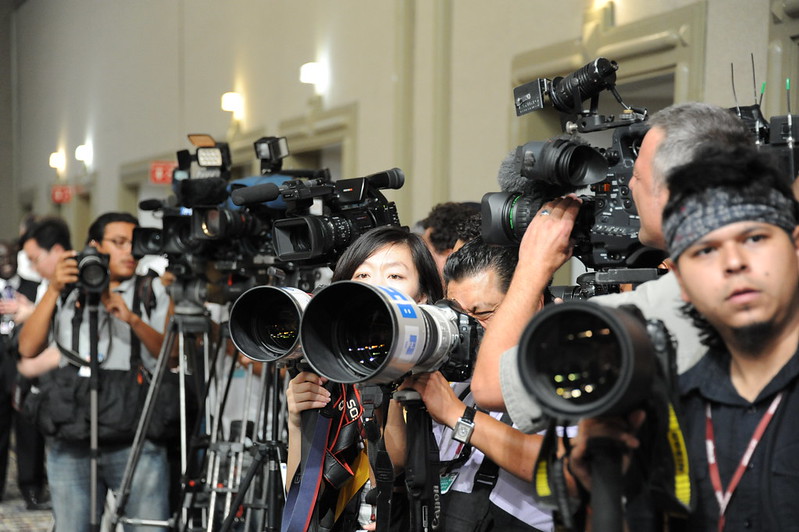 Why is press freedom declining during COVID-19?

In the midst of the COVID-19 pandemic, the world of journalism is taking a serious hit across the globe. Government leaders are starting to adopt measures toward limiting the freedom of the press or censoring oppositional voices. Not only are authoritarian regimes guilty of this move away from a free press, but democratic states themselves are starting to steer away from this fundamental right that is necessary in the functioning of every democracy.

According to the International Press Institute (IPI)’s records, there have been over 160 press freedom violations across the world during this crisis–with almost a third of these violations, involving the arrest and detention of journalists reporting on the pandemic. IPI also documents that over 50 journalists have been killed since May 2019.

Under the pretense of “national security”, governments have taken advantage of this pandemic to exercise restrictions to combat “mis- or dis-information” and stifle criticism.

In an attempt to downplay the scope of the public health crisis, countries have set restrictions on press freedom. Iran, for example, has implemented sweeping restrictions on coverage, while Egyptian authorities have sent more than 60 journalists to jail, censored opposition news websites, and revoked press credentials. As can be seen, authoritarian governments use these emergency measures to further tighten control over information. Russia and China, for example, have ramped up censorship of critical media outlets–including the internet and social media.

A number of supposedly democratic countries–such as Hungary, the Philippines, and South Africa–have also implemented new legislations, which criminalize the publication of “false information” regarding the pandemic. IPI finds that there have been 16 cases of such laws being passed globally with disproportionate penalties. These laws that were initially used in addressing misinformation regarding the pandemic are taken a step further in some countries–such as Vietnam and Algeria, which are criminalizing misinformation more generally.

These new laws or restrictions come at a price. In light of these restrictions, journalists are facing immense dangers in the performance of their duties. Not only are they at risk of infection when they go out to gather and report news, but they are also at risk of criminal charges, harassment, physical attacks, and life threats. In fact, there are reports that journalists and private citizens who reported on the pandemic have disappeared in China last February. All over the world, more journalists are ending up in jail or losing their lives. Some are beaten up to the point of needing medical treatment, while others are verbally harassed and intimidated. One of the most democratic nation’s president, US President Donald Trump, is also not blameless in this violation, as he has been insulting journalists and undermining trust in the media during this whole crisis. Be it authoritarian or democratic regimes, governments are using this opportunity to crack down on press freedom and silence criticisms.

It is easy to disregard these violations when we’re not journalists. It is easy to say that these restrictions on press freedom are necessary in maintaining order and ensuring public health and safety in the country. Undeniably, there should be a limit to press freedom. As prescribed in international law, the freedom of the press is subject to certain restrictions. If staying home would keep everyone safe and healthy, then maybe it is right that journalists should stay home. If avoiding a mass panic would prevent public disorder and keep rolls of toilet paper on store shelves, then maybe downplaying the pandemic would be reasonable.

However, where do these restrictions and media regulation really get societies? Due to Indian authorities’ ability to control media narrative, India’s Prime Minister Narendra Modi’s party was able to use the media to increase Islamophobia by scapegoating the Muslim population as virus carriers; thereby garnering more support for India’s recent discriminatory Citizenship Law. Aside from forwarding political aims at the expense of disempowering minority groups, government-controlled media also basically mean less transparency.

To recall, Chinese government officials attempted to suppress information regarding this new SARS-like coronavirus during the early stages of the outbreak. In effect, unknowing infected citizens travelled and spread the virus globally. If there was free press in China that held authorities accountable and informed the public of the virus way before it reached nearly every part of the world, then officials would have been able to better contain the virus before it spiraled out of control.

Following this lead toward press restrictions and censorship, many countries are also giving individuals the illusion that their country is now relatively safe. With this illusion, many more are starting to go out unmasked or unprotected. Some are even starting to party and go to crowded places. Whether restricting journalists’ right to keep citizens informed is really worth triggering another wave of the pandemic due to lack of information is a question that political leaders should revisit.