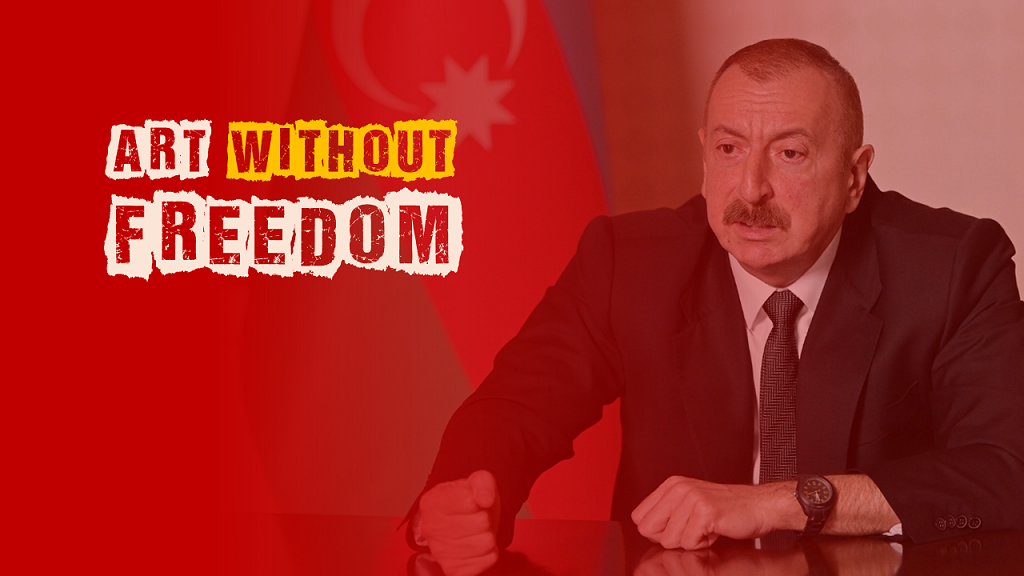 Art without freedom? – Freedom of artistic expression in Azerbaijan

The right to freedom of expression and promotion of free art has come into question in the Caspian city of Baku, the capital of Azerbaijan. In a recent art exhibition of an independent artist in Baku’s Yarat Contemporary Art Space, a politically charged banner was put up in the art venue along with a post on social media commending Azerbaijan’s role in the Nagorno- Karabakh war (2020). The hashtag read #KarabakhisAzerbaijan stating the art space’s support to government policy. The Nagorno-Karabakh region – which is de jure part of Azerbaijan but its population majorly Armenian – has been at the heart of the conflict in the Caucasus region where the two countries Azerbaijan and Armenia have fought bloody wars over the years and is still a trigger for dispute. However, soon after the installation of the banner, the artist commented that he would not fall prey to any kind of political manipulation and refused to associate his art with political projects of the state. Though the gallery terminated the exhibition, it did not take down the flag. This incident is one among the many that demands our attention to the art scene and freedom of artists in the “democratic state” of Azerbaijan.

The ruling government in Azerbaijan are members of the Aliyev family with Ilham Aliyev as President and Mehriban Aliyev as Vice President and First Lady. They hold power over the oil rich nation in its political, social and cultural domains. In addition, the family also monopolizes art businesses. The members and acquaintances of the family hold positions of power in art forums like the Yarat Contemporary Art Space and Baku’s Museum of Modern Art. Even small galleries and avenues receive technical support from the state so as to engage in enhancing the legitimacy and spreading the agenda of the state. Artists who are critical of the government, however do not receive any of these state favours. The Art for Democracy Campaign which emerged to address the situation of artistic freedom of expression in Azerbaijan notes that artists face serious consequences if they express critical views of the government. As per a study conducted between 2011 to 2014 by the campaign, apart from overt ways of curtailing freedom through torture and abuse, the list reports accounts of musicians whose songs were refused to be recorded by studios, alternative artists whose art exhibitions were cancelled and of a number of artists (including actors, photojournalists and writers) against whom legal cases were registered. Hence, on the international scene while the country appears to fund artistic endeavours to maintain a glorified and neutral image, at home, artists are circumscribed to conform to the working of nepotism and to the ideologies of the state.

The freedom of citizens to defend opinions and oppose authoritarian discourses makes for a vibrant democracy. Art and artists expressing controversial or unpopular opinions assert their right to hear from the state. Hence, a challenge to the power and decision-making capacity of the government is meted with intolerance, discrimination and threat to freedom of speech and expression. Amnesty International recently reported cases of attacks on free speech across countries, in Philippines, Tanzania and Myanmar to cite a few. In a similar stance, in Azerbaijan, where free speech and expression is under threat, individual and alternative artists are left with only two options, either self-censorship or leaving the country under political pressure. Reports state that not even social media sites are free from publishing works challenging policies and functionaries of the state. Though in retaliation underground literati and artists have emerged through forums like Art for Democracy, artists are unsafe in their own country. The government wields power over their pen and brush, restraining their imaginations and critical views.