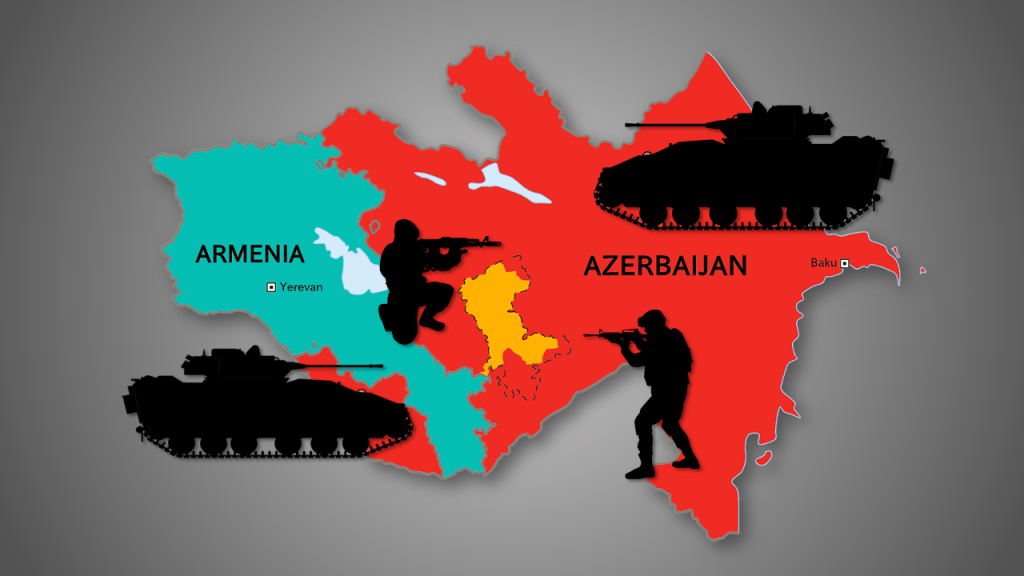 After the Soviet Union collapsed in 1991, a war broke out between newly independent Armenia and Azerbaijan and led to the back-and-forth military disputes or so-called “frozen conflict” over the Nagorno-Karabakh region, between forces of these two countries that have been continuing for decades. On September 27, violence erupted in Nagorno-Karabakh after many months of instability and led to the highest death toll in the region since the previous war came to an end in 1994. Since 1994 Armenia has seized Nagorno-Karabakh and seven neighboring Azerbaijani districts, which accounted for around 13% of Azerbaijan’s territory. The Nagorno-Karabakh region is internationally recognized as part of Azerbaijan but is predominantly inhabited by ethnic Armenians, who are opposed to the rule of Azerbaijan and operate it as a de facto autonomous region. For 26 years both sides were passively negotiating and preparing for a war because the status quo was very debatable.

Battling and displacement occurred in Nagorno-Karabakh and its nearby areas for about six weeks, before the final peace deal was concluded. On the 9th of November, Armenia, Azerbaijan, and Russia signed a ceasefire agreement bring an end to war, specifying that the parts of Nagorno-Karabakh that were captured during the war will be controlled by Azerbaijan together with seven Armenian controlled regions that are surrounding the territory of Nagorno-Karabakh. Thus, around 2000 Russian peacekeeping troops have been deployed to the region, while taking control of the Lachin corridor, which connects Karabakh’s capital – Stepanakert, with Armenia, setting up temporary posts there and monitoring the truce. Russia, which actually provides weapons to both sides, has a military base in Armenia while Turkey, including deadly drones and Syrian mercenary fighters, has supported Azerbaijan with military assistance.

By November 14th, 2317 soldiers had been killed by the Armenian army and 2783 soldiers killed in the recent conflict by Azerbaijan was confirmed by the GoA Defense Ministry. As of 30th November, nearly 150 civilians were dead, among them 50 civilians in Nagorno-Karabakh, and 98 were Azerbaijani fatalities. The conflict has led to widespread devastation of houses and facilities, in Nagorno-Karabakh, as well as on the Azerbaijani side of the LoC. More than 130,000 people were also displaced. According to Armenian Foreign Minister Zohrab Mnatsakanyan around 90,000 (60% of the population) of whom came from the Nagorno-Karabakh and newly returned areas, those who have been arriving in Armenia, and about 40,000 from Azerbaijan that the local government has indicated. As of the beginning of December, most of the displaced Azerbaijanis were able to return back home. Others also want to return home as soon as possible, but the size of the recently dropped weapons could dramatically postpone this process. Amnesty International has confirmed both Armenian and Azerbaijani forces’ use of prohibited cluster bombs. The territory was bombarded almost every day by the Azerbaijani rockets and drone attacks, targeting hospitals, churches, and schools. Azerbaijani towns have also been targeted by Armenian missiles, as have inhabited regions along the front line, including a 28 October attack in the town of Barda which is said to have killed at least 21 civilians, and injured 70 others – and is the deadliest civilian combat occurrence of the entire conflict so far.

After six weeks of blistering military attacks, which ended with a Russian-brokered ceasefire, Azerbaijan regained control over Shusha, Fizuli, and Aghdam, part of the territories that Armenia was controlling before. Most of the heart of Nagorno-Karabakh remains in Armenian possession, patrolled by Russian peacekeeping troops. In addition to decades of destruction, the brutality of the war – one of the most intense wars in Europe and its periphery, this century has brought new sufferings and devastating incidents. For Armenians, it is resettled families, lost homeland, thousands of soldiers killed in service of a fearful war of the 21st century. While on the other hand for Azerbaijanis, the legacy of the evictions from their Soviet homes, from a recaptured land that could not become accessible for years, is now back to their belonging. The officials of Azerbaijan vowed to give Armenians living in its territories equal status, but few will see it operating in realistic terms. The Armenians think they have been targeted because they are Christian and fear is rising of the coalition between Turkey and Azerbaijan, who are still rejecting the 1915 initiated Armenian genocide. But while talking about the international agreement that this region belongs to Azerbaijan, many Armenians say that they will continue to struggle to ensure that Nagorno-Karabakh is recognized as an independent state.

A Swiss humanitarian appeal (9.2 million Swiss francs) for the supply of bread, sanitation kits, and emergency cash assistance to displaced citizens was provided by the International Committee of the Red Cross during the war. Several governments have also donated, including Germany, Sweden, and the UK. The EU has traditionally been at the forefront of the conflict, and through the ICRC has contributed €500,000 and later €200,000 to each Emergency Funds of Armenia and Azerbaijan. Since there is a tremendous economic gap between these two countries as Azerbaijan is a prosperous oil-producing region, Armenia has faced economic difficulties. However, its dedicated diaspora also contributed to Armenian fundraising activities.

The conflict has shifted the balance of power towards Azerbaijan. It has stopped for a short period of time at the moment, but this does not mean that both countries will not go for it once again. Nagorno-Karabakh’s status persists unresolved, meaning that the dispute is not settled, but merely delayed. The involvement of Turkey, Russia, and Iran has brought the process of internationalization of the local conflict. Therefore, for the international community, it is harder now to just ignore the presence of tension in the South Caucasus. Presently, it is difficult to predict what the road between Nagorno-Karabakh and Armenia, which has come under the control of Russia, will look like, but this will have serious consequences for the position of the President of the Nagorno-Karabakh Republic. In the meantime, humanitarian steps would be crucial to address not only the needs of war-torn civilians but also to boost opportunities for co-existence and a prosperous future for the region.