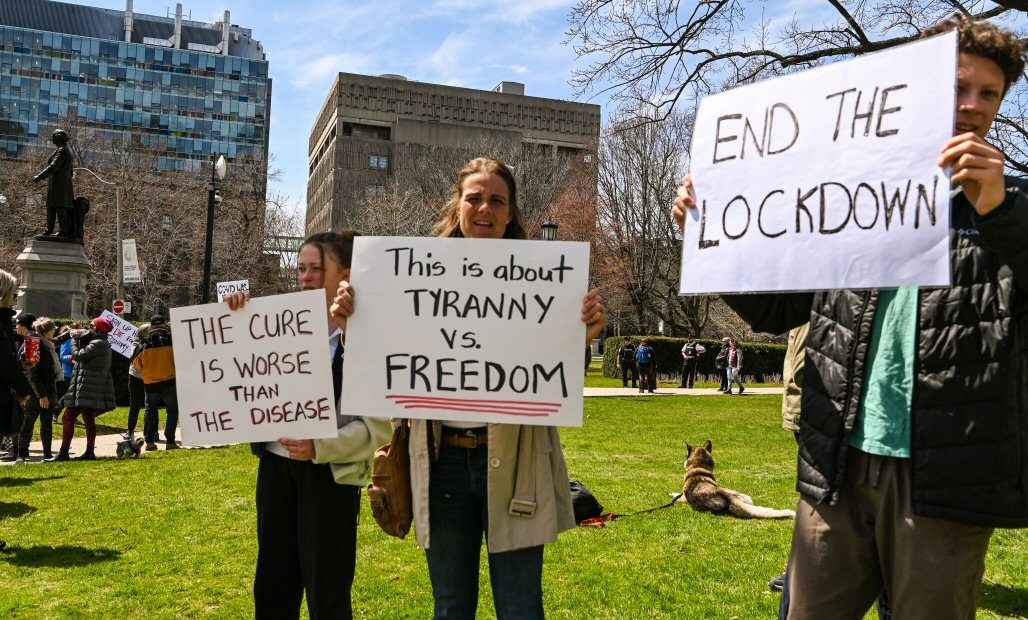 Reflections from a pandemic age: anti-lockdown protests around the globe

Protests against epidemic policies of governments are nothing new. From the 1894 smallpox epidemic in North America to the SARS spread in China in 2002, citizens have challenged the unfair and discriminatory policies of their respective governments to contain the outbreak. Similarly, in the age of the pandemic, the anti-lockdown and anti-mask rallies continue to shake the world. It calls our attention to the domestic relations within world nations, their politics and policies and to a reverberating ideology in the world order today.

The COVID-19 pandemic brought with it a series of restrictions and lockdown measures to prevent the spread of the virus worldwide. Throughout 2020, countries restricted air travel, issued stay at home orders, put impositions on mass gatherings, closed institutional and educational spaces and mandated the use of masks. On account of this ‘new normal’, there have been more than thirty major protests in countries across the globe (Britain, Germany, Italy, Mexico, Nigeria, US, Russia among others) with citizens taking it to the streets and openly resisting these restrictions. The pertinent question traversed here is as to why there has been an uprising against measures intended to safeguard the health and well-being of the very those involved in challenging it.

A perusal of the posters from the protest and the domestic situation of the countries let us classify anti-lockdown protests into primarily three groups (Carothers.,T, Benjamin Press). The first one focuses on the economic hardships and consequences of the lockdown resulting from a no work situation. Protesters do not undermine the need to control transmission, rather they are distressed by the perceived harm from the lockdown. For example, as reported by BBC (20 Sep 2020), in the poorer areas of Spain, citizens are sceptical and scared of the economic impacts of the lockdown, that it would deprive them of their basic income. One of the global outcries was that, “we (those from the economic margins) would rather die of the virus than of hunger”. Further, the shortcomings of the governments in handling the pandemic also stresses on the withering away of a welfare state entrusted to secure public health.

Secondly, according to activists and human rights organisations, the lockdown has been acting as a shield for many of the ruling regimes in the world to pursue political projects and controversial policies. It has ushered in a rise in state surveillance and public control globally paving the way for anti-lockdown protests. The BBC ( 3 Jan 2021) reports that at least twenty six countries in the South East Asian region have reported accounts of human rights violation, prosecution of defenders of human rights and adoption of harsh laws. For example, in the Philippines, critics point to controversial laws such as ‘shoot to kill’ orders from the government to carry out quarantine and other limitations on media.

“We are here because we are robbed of our freedom” sums up the third type of anti-lockdown protests around the world. Media reports claim the presence of far-right activists, anti-vaccine advocates, and other religious conservatives as in it and the cases of these protests are more in Western nations than that of the East. For example, in Germany, the protests have been led by Querdenker, the umbrella group vouching for anti-shutdown. In Italy, the Orange Vest has emerged as an anti-establishment group and had refused to wear masks (The Telegraph, June 2020).  Fuelled by the pandemic, these protests emphasize personal liberty and freedom over public health measures. It shows a conflict between individual freedom and public safety, and that of a contentious relationship between the state and citizens worldwide. On the one hand, when state surveillance and power is on the rise, one speculates if the anti-lockdown protests focused on liberty and individual freedom mark an exit from contractual theories of state that legitimises the authority of the state over the individual. It shows a shift to a libertarian world order that allows for extension of personal freedoms and weakening of the interference and role of the state.

The anti-lockdown protests, hence are not mere ‘skirmishes’ occurring in different parts of the world. Those involved come from different class affiliations (working class, business persons, and industrial labourers). Their nations have varied regimes (democracy, authoritarian, monarchy).In spite of the localized nature of these protests; they indicate the demands and agonies of a global citizen. It highlights the pressing issues of economic backwardness, political oppression by states, shortfalls in state response to pandemic and rise of a libertarian ideology across nations. Hence, in an on-going pandemic, the need of the states is to reaffirm trust in people’s mind and enact people centric policies.