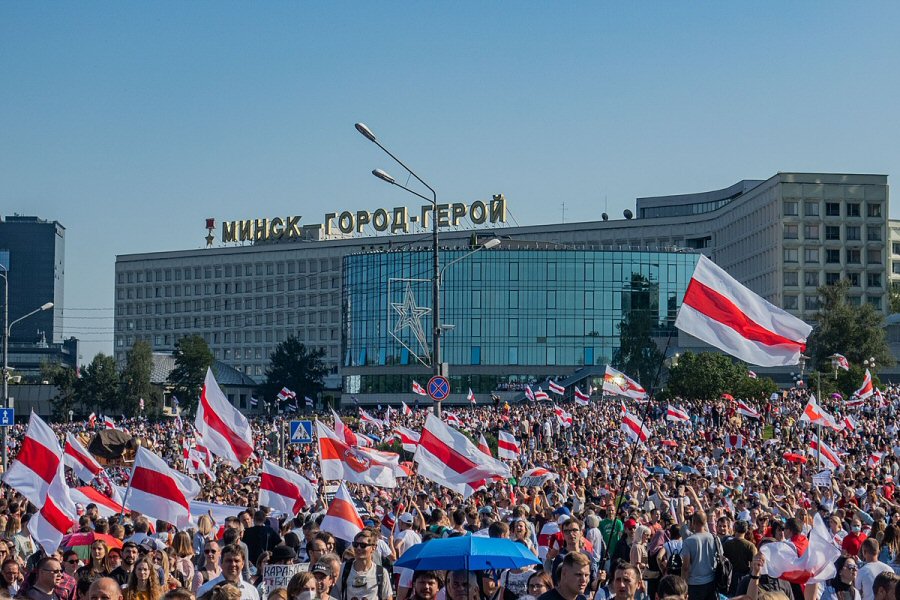 Belarus crisis: The dilemma between democracy and stability

The Belarus crisis has not come to an end yet. Thousands of protesters still crowd the squares of Minsk and other cities every weekend. The West and, in particular, the European Union have been supporting the democratic movement since the fraud elections this summer. For example, the EU imposed sanctions on individuals involved in violence against the protesters and on the Belarusian president Alexander Lukashenko.

Nevertheless, many demand more action by the EU and its member states. When Sviatlana Tsikhanouskaya, the exiled leader of Belarus’ opposition, visited German chancellor Angela Merkel in October, she hoped for more financial support from Germany. However, Berlin has not launched any substantial programs that would go beyond the EU’s sanctions yet. States that are especially affected by the crisis, such as Poland and Lithuania, are pushing for far-reaching measures in the EU. For instance, Lithuania, Poland, and Romania proposed to offer a package of visa liberalization, trade agreements, and financial support for Belarus if the country takes steps towards democracy. Warsaw and Vilnius have also taken unilateral measures such as additional funding for Belarusian NGOs, media, and university students´ scholarships.

Still, the willingness to provide more comprehensive support for Belarus’ democratic movement appears to be especially limited in Western Europe. Instead of introducing new sanctions and bolstering the protest organizations, French president Emmanuel Macron proposed that the EU could lead a mediation effort between the opposition and the Belarusian state, including a seat at the table for Russia.

Macron’s thinking is heavily influenced by the role Moscow plays in the crisis. Officially, Russia and Belarus form a Union State, and both countries are deeply intertwined with each other by military cooperation in the Collective Security Treaty Organization (CSTO), economic interdependences within the framework of the Eurasian Economic Union (EAEU) and the Eurasian Customs Union, and linguistic as well as cultural links. Moscow fears that a democratic overthrow in Minsk could have ramifications in neighboring Russia, too, threatening Putin´s autocratic rule. Therefore, Putin stated that he would be ready to intervene in Belarus if necessary, and there have been reports of Russian forces already operating in Belarus to guarantee Moscow’s control.

Further destabilization and escalation in Belarus could be an opportunity for Moscow to use its many levers and expand its power in the country. This would dim the prospects for democracy and pose a security risk for Eastern European countries, as Belarus could not continue balancing between the EU and Russia and would cease to be a strategic buffer. Moreover, an escalation caused by EU support for protesters would also strain the relations between the West and Moscow even more, a development that states like France want to avoid.

It is against this background that Macron stressed that every form of escalation and additional violence in Belarus must be prevented. Furthermore, in Poland’s current Foreign Policy Strategy, Belarus is primarily mentioned in a context of resilience. The EU and its member states find themselves in a dilemma: on the one hand, they want democracy; on the other hand, they need stability.

How could this dilemma be solved? There are basically two ways. First, the EU could accept Moscow’s dominant role in shaping Belarus’ future under the condition that some minor democratic reforms are implemented. Here, the uncertainty is whether the EU has enough leverage to control Russia’s adherence to the agreed conditions, and what reforms would be acceptable for Moscow. From the perspective of some states, one advantage would be the likely improvement of the West´s relations with Russia.

However, there is a second option. Lukashenko’s regime and Putin’s opportunities depend on the loyalty of Belarus’ security forces. Even though a significant number of security officials have already resigned due to the crisis, many are still working for the regime as they are financially dependent on it and do not have prospects for civilian jobs. The EU could set up programs to support resigning security officials and allow them to form a new protection force for the democratic movement. If such a protection force forms fast and is massive enough, it could be a deterrent against Russian interventions. This way, the EU could prevent further violence against protesters without involving itself too much. However, the major risk is that the defection of security forces does not happen fast or comprehensively enough, so that the Belarusian regime and Russia will double down their repression to crush the protest movement. Even if a protection force forms, it is unclear how powerful it must be to deter Russia, although Moscow’s appetite for more protracted military conflicts should be limited after its costly involvement in Ukraine and Syria.

Thus, both options come with their own risks and chances. The first option stresses stability, while the second focuses more on democracy. Nevertheless, both ways would allow a compromise between the two objectives. But no matter which path the EU leaders decide for, one thing is for certain: inactivity is probably the worst option.