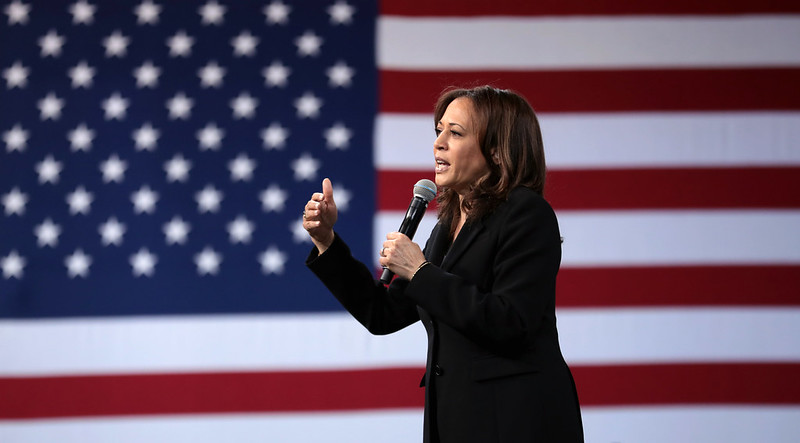 Biden picks Kamala Harris for VP: Is this progress?

Joe Biden, Democratic presidential nominee announced he chose Kamala Harris as his running mate on August 11, making the California Senator the first Black and South Asian woman to run for the presidential ticket. Biden’s pick might be ground-breaking in a sense, but Harris’ record ignites criticism from both the left and the right.

Kamala Harris, 55, was among the most expected candidates to join Biden’s campaign. Her relatively young age, her experience as senator, California attorney general, and San Francisco district attorney, along with her presence in the first months of the Democratic presidential nominee race gave her a good chance to become a potential future vice president. And the Black Lives Matter movement that has recently re-emerged in the United States has made a claim for more progressive national politics, including black representation.

Biden was aided by a number of close consultants that helped him thoroughly analyse the best possible VP for his campaign and decided that Harris would be the less “problematic”. Biden promised he would choose a woman as his running mate and his team considered some 11 female politicians for the position. Kamala Harris is more moderate compared to other candidates like Massachusetts Senator Elizabeth Warren who advocated for Medicare for all and the cancellation of college debts, Los Angeles Representative Karen Bass who is known for fighting for social justice, or Georgia Representative Stacey Abrams who has organized several local grassroot movements.

If Biden had chosen a more progressive candidate, the accusations by the Republican Party that Democrats are shifting to the left would have seemed to be true. Warren is also about the same age Biden is, and her leaving the Massachusetts senator position might result in a Republican successor, which is a risk not worth taking for Democrats. Abrams has less experience in governing, Bass openly voiced her admiration of Fidel Castro, which makes her unacceptable in Florida where most descendants of Cuban immigrants live, and Susan Rice, Barack Obama’s former national security advisor is easily attackable for the administration’s flawed foreign policies. Hence the California Senator came out as the winner.

While mainstream centrist Democrats celebrate the choice, for some, even for hardcore Biden supporters, picking Harris seems odd. At a Democratic debate just a year ago, she confronted Biden for opposing mandatory school bussing back in the ‘70s, a policy which aimed to racially integrate schools that had previously been segregated. A few months ago, when asked if he would consider Harris as his running mate, Joe Biden walked away without answering. Now that Harris stands next to Biden, he can return to his image that had been formed while he was VP to Obama, namely being “best friends” with a Black person.

President Donald Trump also recalled the Senator’s remark on Biden and called her “nasty” and “disrespectful” for attacking the former Vice President. Republicans also say Harris is “too ambitious,” which gives a sexist undertone to their criticism as pursuing any political office is essentially ambitious. Some right wing figures have also made racist accusations about Harris not being eligible due to her non-American ascendants. But there is probably no need to fear for Kamala Harris – as a member of the Senate judiciary committee, she has proved herself to be a tough debater. Among others, she was praised for her questioning of Brett Kavanaugh conservative judge nominated for the Supreme Court, and Jeff Sessions former attorney general who claimed Harris made him “nervous.” With such skills Kamala Harris is likely to excel in the presidential debate against Trump and Mike Pence.

While Harris said she had purposefully chosen to study law and become attorney to change the oppressive system internally, her record as a prosecutor makes her unappealing for leftist Democrats – or, due to the bipartisan system, Democrat leaning leftists. Harris has always opposed the death penalty and she had some great initiatives for police reform, including the OpenJustice database, but she has also failed to step up against police brutality and abuse of power, she did not help pass legislation that would have had the potential to reduce violence conducted by the police, mostly to avoid confrontation with the police union. Harris was the successor of a highly progressive California attorney general, so her seeking compromise with officers seemed like a step-back in the efforts to reform the justice system.

As senator, Harris has advocated for justice reform more fiercely, and recently she has backed legislation that aimed to make police officers more accountable, but when she had the opportunity to change the law enforcement from inside, she failed to do so. Her inadequate response to police brutality as a “top cop” has led progressives to label her directly responsible for the unjust killings committed by officers and the mass incarceration of Black people for minor violations. In a time when more and more people call for the defunding or the dismantling of the police, her history of being attorney general will not help Kamala Harris boost her popularity.

Biden is accused of pursuing empty identity politics since picking Harris as his VP may seem progressive without showing up actual progressive policies. The California Senator’s centrist policies, which highly resonate with Biden’s, do not have the potential to address Democratic leftists who feel abandoned after Bernie Sanders left the pre-elections. But Harris’ nomination should be endorsed in the sense that this might set up a tendency of choosing more diverse decision makers, which has long been overdue in the US. Of course, ticking the “Black” and “Female” boxes of a hypothetical diversity list is not enough – if Kamala Harris wants to be seen as progressive as she claims to be, she needs to step up her game and bring about real changes.