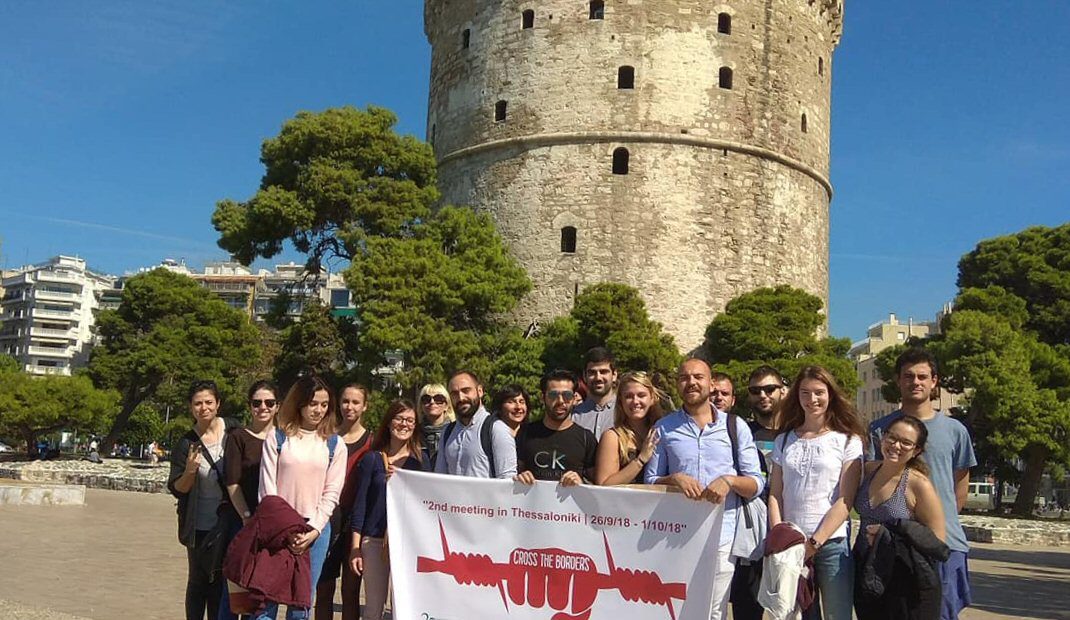 Cross the Borders: impressions on a study visit in Thessaloniki

From 25 September to 2 October, myself and another intern at the ICRP took part in an Erasmus+ Study Visit in Thessaloniki, Greece, part of the ‘Cross the Borders’ project, whose purpose is to exchange best practices between youth engaged in work with migrants and refugees.

Apart from the ICRP, members from Gruppo Umana Solidarieta’ (Italy), Projuven Association (Spain) and Kalunba (Hungary) also took part. The idea behind the whole project was to increase awareness of contemporary challenges resulting from the ‘migration crisis’, to provide new tools and methodologies for solutions of the obstacles migrants and refugees are dealing with, to equip youth workers with training skills in a non-formal educational experience and to promote networking.

The rewarding one-week experience helped us gain first-hand insight into the work of our host organization, Antigone. Antigone, or Information and Documentation Center on Racism, Ecology, Peace and Non Violence, develops activities on anti-racism and non-discrimination, human rights, social ecology, peace and non-violent conflict resolution. Some of their members had volunteered in one of the refugee camps in the area, where they worked with children in a non-formal education setting. Many of their members took part in the study visit, organizing trainings, disseminating methods and techniques for youth work and moderating discussions.

We visited or were visited by several other organizations from the same field, including ‘Doctors of the world’ and another free health clinic serving the underprivileged; a social center offering free meals and clothes to homeless people; the Greek Council for Refugees; a Roma youth organization; Thessaloniki’s Pride, an LGBT group; and others. In other words, we got acquainted to a broad spectrum of humanitarian and civil organizations active in Thessaloniki, a city where large numbers of migrants and asylum seekers are still stuck in the camps or in the streets, after the EU decided to close down the Balkan route in 2016.

My favorite part of the study visit was the day trip to the near-by town of Kilkis, where we were hosted by members of the association Omnes. Kilkis, being situated right on the border with Macedonia, was likewise very affected by the ‘migration crisis’ – and still is. The small group of very passionate locals from Omnes started by helping with food and other basic needs in the massive camps surrounding Kilkis, and soon devised a plan for sustainable housing and integration for all those migrants and refugees who found themselves in the town and decided to stay. Their idea was not short-sighted humanitarianism, but long-term solutions which are sustainable and in favor of all the people in the community – both those who were already living there and those who came during the ‘crisis’.

Those of us who are not actively working in NGOs dealing with migration and refugees had the chance to see the kind of problems these organizations are facing and to gain deeper insight in the work they are doing. The broad conclusion of the discussions was that both migrants/refugees and people working in organizations that try to support them are dealing with an unprecedented hostile climate in Europe. The rise of the radical right-wing throughout the continent relies on a strong anti-immigrant propaganda and exerts a significant pressure on civil sector organizations, which are being demonized for their pro-migrant positions. It was in any case comforting to share the burden of this concern with people involved in similar activities. All in all, it was a rewarding and enriching experience.