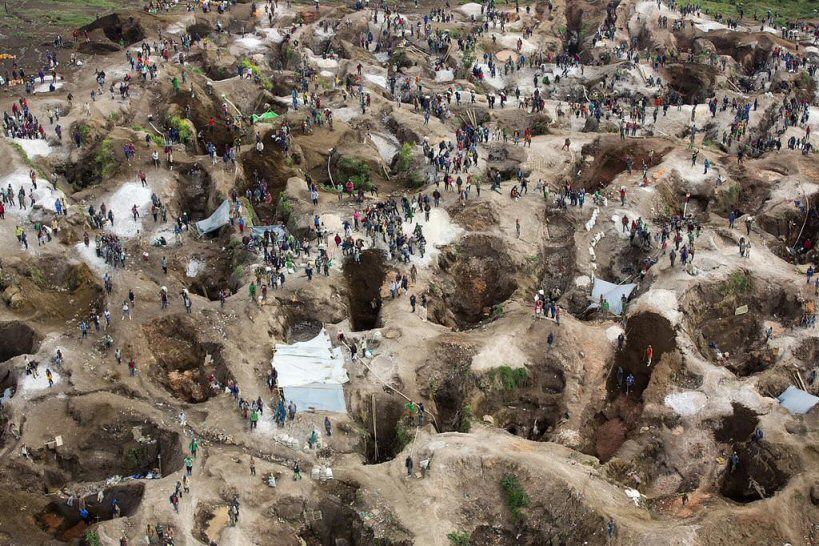 Coltan: a blood-stained mineral in our hands

As ancient explorers wandering through Latin America, Africa and Asia, looking for gold, precious stones and treasures, today’s multinationals are the modern version of the Western raider in foreign lands. Coltan, a metal with which electronic devices such as phones or laptops are made, is a sacred metallic ore for electronic multinationals and a basic material to make Western life easier. However, while smartphones and laptops end in the hands of Western society, populations such as the Congolese have paid coltan with their blood.

Tantalum, a chemical element which stands out for its resistance against corrosion, is coltan’s main chemical component. Its corrosion immunity together with its capacity to hold a high electrical charge makes tantalum a basic component for electronic companies, in fact, tantalum can be found not only in phone cells, laptops and video game consoles, but as many devices as it is imaginable. Particularly, coltan is used for the so called tantalum capacitors which are needed for the proper power supply of the device. With such technological description people might expect that coltan requires of a complex extraction as well, but reality is way different. Coltan, which is largely found in Eastern Congo, is extracted in the most rudimentary way: shovels and colanders are the most common “machines” in the mineral’s extraction. Just watching a documentary you can realize how primitive the process is: groups of people bunched all together – children among them children – just digging with what they have until they find the blackish coltan. No supervision, no security measures, why would you need to comply with security standards when you have people desperate to work for less than $1 a day. Comparing the average $10 salary per month of a common Congolese with the $10 to $50 that a coltan worker can make a day, coltan mining seem to be the job to achieve the “Congolese dream”. But surprise! No working hours, no holidays, 24/7 digging to make up to $50 at the expense of your back and lungs.

Let’s google the price of coltan now. The first that you can see is that prices are very relative due to the irregularities behind the business and the extraction, however, estimations reveal that a kilogram of coltan could cost over $400 in the market. There is no doubt that for multinationals and companies coltan is an incredible market opportunity considering that a phone or a laptop is one more joint in our body, but for countries lacking of infrastructures to exploit the mineral, coltan means people’s exploitation and a battle of interests among powerful groups and lobbies. For a people that has been undergoing a conflict surrounded by violence and blood, talking about work schedules, security measures and Human Rights, is just a utopia. However, the DRC is not an exception in the African map; Sierra Leone is another example of a country whose diamonds are more a problem than a solution considering that 69% of its population live with less than $1 a day. The “resource curse” theory is the academic name for many African countries reality: countries rich in natural resources but with high poverty rates, corruption, and conflict.

Without mentioning the colonial period, Sub Saharan Africa and above all Central Africa have been cruellest victims during the last decades of their own resources. An episode such as the Rwandan genocide in the 90s spread violence throughout Central Africa and the “resource curse” with it. In the case of the DRC, the so called Second Congo War took place between 1998 and 2003 and left more than 5.4 million deaths which make the conflict the bloodiest after WWII. During the 5 years of the Second Congo War, coltan financed the conflict by giving militias and other groups an opportunity to fund their activities and buy weapons. Such a deadly conflict left indelible marks across the country, and above all in Eastern Congo, which is still suffering the effects of the war with constant fights between rebel groups, and ethnic tensions as ghosts of the Rwandan genocide. Many of these confrontations are product of the interests in the mining industry, and as not could be otherwise, coltan mining. In this breeding ground of instability, violence and minerals, international companies took advantage of the irregularities of coltan mining making a profitable business for them. Considering that phones, computers, laptops and game consoles are products with a very high demand, coltan will continue to be an essential material for the big companies. The “resource curse” has shown no mercy with the DRC, which casually is one the countries with the largest coltan reserves in the world.

It is difficult not to be a hypocritical with the “minerals business” when I am touching coltan right now; globalization, marketing, consumerism and of course, ourselves, we all ask for the digitalization of our lives. But even recognizing that I could be a hypocritical and that we all have blood in our hands, I still believe that consumers are not the ones to blame for the atrocities committed thousands of kilometres away by unbridled capitalism.