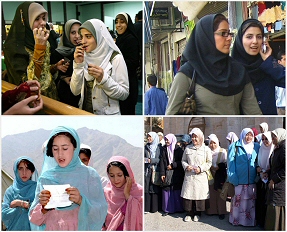 “Everyone has the right to freedom of thought, conscience and religion; this right includes freedom to change his religion or belief and freedom, either alone or in community with others and in public or private, to manifest his religion or belief, in worship, teaching, practice and observance.”
–European Convention on Human Rights

In 2004 France’s National Assembly banned the wearing of headscarf in public schools. Even though the new regulation applied to every religious symbol – such as the Jewish kippah or the Christian crucifix – it concerned most of Europe’s Muslim community. Moreover, the law was followed by another one in 2011, prohibiting the veils that cover the face. Later more countries like Belgium or even Turkey imposed similar restrictions.

The Muslim question has been on the agenda for many years as there is constant immigration from the Maghreb countries and the Middle East. The vast majority of them arrived after WW II as there was a lack of cheap workforce for the reconstruction of big cities. This immigration was meant to be temporary, so Europe hasn’t built up regulations that could have integrated the new Muslim community. But contrary to the expectations and because of the better economic and work conditions, many stayed here to build up a new life with their families.

The official approach remained that if the Western and Muslim culture lives next to each other, after several decades they will get closer and have a better relationship, so no further measure is needed from the state. But the plan seemed not to work. Several European leaders, such as Angela Merkel, Nicolas Sarkozy or David Cameron stated in public speeches that the conception of multiculturalism had failed and parallel societies existed on the Old Continent.

Because of the wrong socio-political conception in the past, today basic human rights of Muslims are unproportionally limited. While the modern Europe is built on the values of equality, democracy and freedom, it seems that these rights simply don’t apply to them. Islam has a special attribute that is different from the modern European perceptions: the totality. It means that for Muslims the religion influences every sphere of life: economy, ethics, culture, politics, and the whole way of thinking about the world. If the state imposes restrictions in any segment of life – like the ban on headscarves –, that can mean a real threat to the whole religious life.

Europe has not been following this way of thinking for a long time. Since Protestantism gained ground in the 17–18th centuries, external manifestations of religion are not that important, more emphasis is put on the inner conviction of the believer. Even if important conventions, such as the European Convention on Human Rights guarantees the right to freedom of religion and conviction, it applies only to the internal conviction, the external can be restricted if it endangers the stability of the society.

This approach can be seen in the jurisprudence in the European Court of Human Rights. In 2013 a French citizen, a young Muslim woman turned to the Court because she was banned from wearing her burqa. She claimed that in a democratic society she cannot be prohibited from a part of her religion and the state had nothing to do with the issue. But because of the European perception, her case was declared not admissible.

Something similar happened to Lucia Dahlab, a Swiss teacher who was forbidden to wear her hijab in school time. She also brought the case to the ECHR, as none of the students or parents had any problem with the way she manifested her religion – so it was an unprovoked step against her freedom. The Court refused to discuss the case, as they told, the headscarf is a very strong religious symbol that can violate the children’s freedom to religion and conviction and that is against the equality of sexes. Ironically, the ECHR found it incompatible with the principles of tolerance, respect, equality and non-discrimination.

The Court – and the whole Western society in common – ignores the fact that one can wear the headscarf for many different reasons, not only because of chauvinist oppression. It can be a way to express the love to God and the identity of being European and Muslim at the same time. It can also be a tool of becoming the member of the Muslim society and a possible way of gaining the family’s respect. Even Amnesty International raised its voice against the ban on headscarves. As they claim, with the restrictions Muslim women simply won’t leave their homes, increasing the already existing level of exclusion from the society.

As it can be seen, mainly the different law interpretations and cultural traditions cause the real human rights violations. If there was better communication, a better functioning and more peaceful society could be built up, where there is mutual respect towards each other. The question is getting more and more important, as the Muslim community is constantly growing and according to some experts, in some decades or centuries they can become a new majority. As the globalisation and immigration are irreversible international trends, the focus should be put on living together, forgetting the conception of living next to each other.