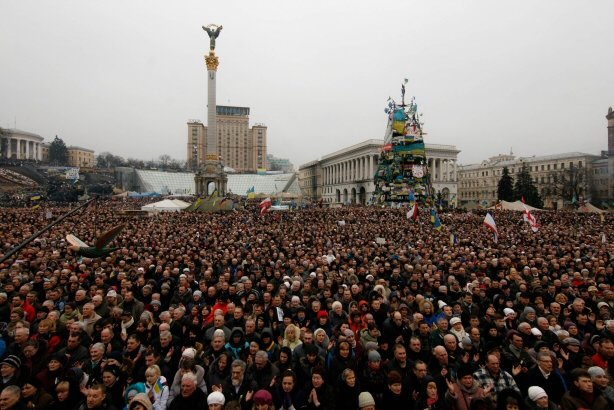 The ongoing debate about Ukraine’s and Crimea’s future is probably still far from a closure. The biggest turmoil may be over on the streets of Kiev but the game for the great power’s interests in the region is still far from its end. Not only Russia and the Western powers, namely the USA and the European Union, have been stressing their different opinions about the turbulent events in Ukraine, but also the international community has been paying great attention to the events in the region. For instance, the United Nations Security Council has held more meetings about the topic.

Although the protests had already started in November 2013, the events in Kiev were speeding up in February this year. At the beginning, demonstrations were held against the Ukrainian government’s decision about abandoning the signing process of the Association Agreement with the EU in favour of closer ties with the Russian Federation. At that time about 100,000 people were participating in the protests, and Kiev’s Independence Square had rapidly turned into the main area of confrontations between the demonstrators and police forces. Meanwhile the continuing protests, the then Ukrainian President Viktor Yanukovych signed an agreement with Russian President Putin about Russia buying $15bn of Ukraine’s loans and reduction of gas prices.

At the end of January 2014, the demonstrations turned deadly due the death of three protesters, and the parliament accepted a restrictive anti-protest law. The protests had quickly spread across other cities of western Ukraine and turned more and more against the Yanukovych regime. On 20 February, the events became even more violent in Kiev; the Independence Square turned into a battlefield and at least 88 people were killed by uniformed snipers in 2 days. On 23 February, the world news was all about President Yanukovych’s disappearance; as it became clear later he fled to Russia. On the very same day, the parliament voted to remove him from power and announced elections for 25 May. Olexander Turchynov was named as interim president by the parliament and Arseniy Yatsenyuk was nominated Prime Minister.

So how have the international community reflected on the rapid turnovers in Ukraine? The UN, the European Union and USA recognized the legitimacy of the new Ukrainian government and the removal of Yatsenyuk since it was legally voted by the Ukrainian parliament (and even by the members of the former president’s party). Russia’s description of the events was completely the opposite; President Putin insisted that the change of regime in Kiev was only an unconstitutional coup.

The events raised the international community’s attention even more when the situation’s escalation has continued on the Crimean peninsula. In Crimea’s capital, Simferopol groups of unidentified gunmen appeared and seized strategically significant points such as the main airport and Ukrainian military bases at the end of February. The supposedly Russian armed men’s identity was not admitted by Russia, as President Putin described them they were only “self-defence forces”. Tensions had increased even higher when Putin asked and received the permission of the Russian parliament to use force in Ukraine officially in order to protect Russian citizens and interests in the area.

On 6 March, Crimea’s parliament voted to join Russia and decided to hold a referendum on 16 March, which had the same result as the vote of the members of the parliament, so Crimea declared to leave Ukraine and to join Russia. Two days later President Putin signed a bill to absorb Crimea into the Russian Federation. The Ukrainian government recognized neither the parliament’s vote nor the referendum, since in spite of Crimea’s relative autonomy the Ukrainian constitution does not contain a possibility to secede from the country.

The majority of the international community has described Russian steps as aggression against Ukraine and called upon Russia to withdraw its forces. Furthermore, the UN Security Council has held meetings about the issue but no resolution could be accepted because of Russia’s veto. Moreover, vivid diplomatic discussion has been taking place inside of the Foreign Affairs Council of the EU, and the member states have united in condemning Russian actions.

Ukrainian interim Prime Minister Arseniy Yatsenyuk has been strengthening ties with the United States too, and has had several meetings with President Obama. Beside the strongly condemning Western rhetoric, the EU and US imposed sanctions such as travel bans and asset freezes on certain Russian officials after the Crimean referendum.

On 31 March President Putin ordered a partial withdrawal of Russian forces from the Ukrainian border, nevertheless, NATO said there is no visible sign of this withdrawal, and as a warning it suspended all civilian and military cooperation with Russia.

It is quite likely that a military conflict in Ukraine is neither Russia’s nor the West’s interest. The economic ties are so diverse between Russia and the European Union that a complete isolation would not be useful for any of the above mentioned sides. During the previous weeks, different plans have been circulating in the news about Ukraine’s possible future. A couple days ago, John Kerry, US Secretary of State and Sergey Lavrov, Russian Foreign Minister also had a meeting about the Ukrainian crisis. Nevertheless, this kind of bilateral discussions have some danger and there is something that the international community should not forget: let Ukraine and Ukrainian people decide about their own future. Any possible solution of the problem can only be reached with broad multilateral discussion and with the involvement of all the interested parties.