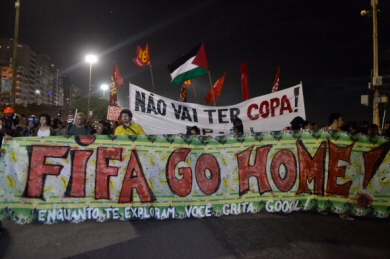 The Politics behind the World Cup – Brazil

Sven-Göran Eriksson, the former manager of the national team of England, once said: “There is more politics in football than in politics.” No global tournament demonstrates this better than the ongoing World Cup in Brazil. In the close relationship between football and politics, the stage is in many ways used for propaganda, whereas the audience is supposed to sit back and enjoy the game. Luckily, not everyone turns a blind eye on what is going on behind the scenes.

The ordinary football fan might have noticed that there is more to this event than the usual discussions around the football World Cup draw, when videos of mass demonstrations and pictures of blood-soaked protesters in the streets of Rio and Sao Paolo were shown on TV screens around the world. Political demonstrations in Brazil are frequent, yet in the past, they were smaller, with the focus on single-issues such as bus fares, corruption and healthcare but they were not regarded important enough by the government to be taken on the agenda. Since last year, with the unpopular Confederation Cup and raising protests against the FIFA and the holding of big sports events in Brazil at taxpayers cost, demonstrations are becoming bigger and bloodier, as tensions are growing and people are finding a common cause and a common culprit. Their claims partly remain the same, yet the waste of money during the preparations of the World Cup fuelled the frustration among the people, who do not want to be appeased by FIFA ambassadors like Pele who tell them, what is going on is good for the Brazilian economy and will eventually pay off for the Brazilian people.

For the government, such PR is essential and becoming more and more crucial for a positive outcome of the upcoming elections in October: since the scandals around the World Cup became more frequent and the government is confronted with an increasingly difficult situation in which it has to explain itself, support among the voters is diminishing: within 4 months, the Rouseff government, which was confident to win the elections so far, has lost more than 25% in potential votes, according to polls. Those numbers reflect the massive gap between the atmosphere in the streets and among the political elite, which praises oneself with an unforgettable World Cup that is going to attract both tourists and investors. The economy is indeed prospering, but not for everyone – Brazilian construction companies such as Odebrecht, which is also a major contributor to president Rouseff’s Workers party, will be among the main beneficiaries of the tournament.

Also for politicians not only in Brazil but around the world, the World Cup with its global media coverage offers an opportunity to be in the spotlight for at least some weeks: while Latin American presidents loudly put out their conspiracy theories against South America, others try to make friends via social media whereas president Rouseff is looking forward to watch the finals with her Indian and Chinese counterparts during the BRICS meeting at the end of this week. The World Cup 2014 – the most globally politicized tournament in decades?

For the ordinary Brazilian people, in the meantime, prices rose immensely since the World Cup came to the country, and despite the popular promise for improvements, transport became even more of a problem. In the end, taxpayers had to pay with more than $3bn for unexpected delays in the construction and the refurbishment of stadiums which destiny is unclear when the World Cup will be over. While watching the construction of the most glamorous stadiums right next to slums in the poorest areas, scandals of corruption and accidents of uninsured construction workers were omnipresent. Initial enthusiasm, which could be seen during the announcement of Brazil as the host country, has turned into anger in the streets, which is indeed so big, that insiders predict big problems, should the Brazilian football team get eliminated before the finals. For the ordinary people, their politician’s power plays could not be more strange and eccentric, while being confronted with reality alongside the stadiums every day.