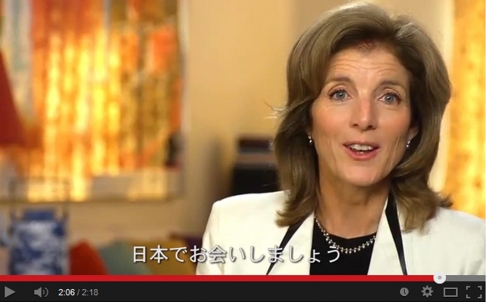 The introduction of a new ambassador to a host country is often a matter of delicacy. Public diplomacy can be used in various ways to add to the first positive impression, such as in the example of Caroline Kennedy, who was appointed last year as the first female US ambassador to Japan.

Hours after being sworn in, she appeared in a video posted on the website of the US Embassy in Tokyo. In the video, subtitled in Japanese, the new Ambassador speaks flattering and charming from a very personal perspective, which was obviously well received by the Japanese people. The charming influential setting, her living room in New York with the arrangement of Japanese ornaments in the background, is clearly part of a highly professional PR strategy which knows about the power of images and language as part of a new “video diplomacy”. It is the State Department’s Bureau of International Information Programs (IIP), which produces introductory videos for Ambassadors prior to their arrival at their new posts. From there, they get distributed in various ways, on video channels and local newspapers in the host country.

In times of Twitter, Facebook and YouTube Channels, for being successful and highly regarded as a diplomat, good PR is almost obligatory. There is more to the popularity and the number of followers on Twitter; it also shows how serious Ambassadors take their job and how much it means for them to have good relations with the host country. In the case of Noah Mamet, the new US Ambassador to Argentina, a PR campaign might have been a good idea: his appointment by Barack Obama led to massive protest in the Argentinian media and even a protest letter to the Senate leadership that could jeopardize the confirmation process for Mamet. In their view, Mamet, who does not speak Spanish and has never been to Argentina before, is a political appointee being compensated for his funding contributions to Obama’s re-election bid.

Such appointments, if not done and promoted in the right way, can end up in a disaster. The new US Ambassador to Russia will certainly have difficulties to encounter sympathies in his new office, formerly being sent as Ambassador to Georgia, Lithuania and Ukraine, the most problematic countries for Russia among the former republics of the Soviet Union. It is not very helpful that former US Ambassador McFaul, who expressed himself very critical with Russia and its foreign policy in the past, is supporting the candidate on his Twitter profile.

Public diplomacy marks a watershed in modern diplomatic practice. As transparent as it might be perceived, it does not change the nature of diplomacy, as power politics still happens on an exclusive level. Yet it influences to a great extent the way how decisions are perceived and respected by others. Public diplomacy as the new accessory of world politics will surprise us in the future.