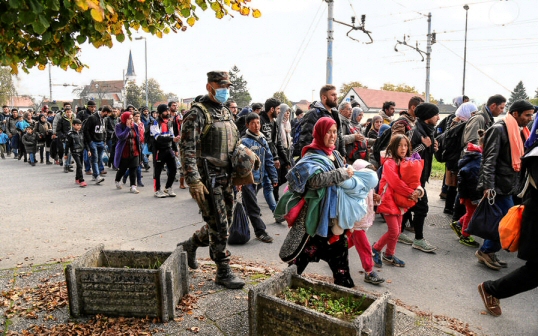 With the intensifying Syrian conflict, there has been high level of violence and destruction with various parties engaging in crimes and breaking the rule of law. Rapes, sexual assaults, recruitment of child soldiers and forced displacement have become common. The conflict is not only present in Syria but has impacted its neighbours and the EU countries. The violence and destruction resulted in people losing their home, their businesses and more. They lost access to basic necessities of food and shelter. At this point of time, the need for humanitarian aid is overwhelming. It varies to large extent from rescuing people from conflict-torn areas to providing them food, shelter and sanitation.

Food is scarce and the prices of basic commodities are rising. There is shortage of medical personnel, medicines and hospitals, a good number of which got destroyed during the conflict. Roughly 13.5 million people need humanitarian assistance. A large number of them are in remote areas. With ongoing winter, it has become more difficult for the conflict victims and the volunteers who are trying to help them. Various relief organisations tried to help but they themselves are being targeted. As a result many have stopped or scaled down the effort.

The EU has sought protection to civilians, especially children and woman and condemns any attacks on the same. In addition, the EU has requested all parties in conflict to support movement of aid which has not really been possible due to the active conflict.

Syria’s neighbours, Turkey, Lebanon, and Jordan have extended help by opening their borders to the Syrian refugees and offered them shelter in refugee camps. The estimates are that Turkey has roughly 2.5 million refugees, in Lebanon nearly 1 million and in Jordan around 600,000. The countries and the refugee camps are near saturation which has forced people to seek help from the EU. Around 800,000 people have sought asylum in the EU.

Apart from this, the EU is extending monetary help to the tune of €5 billion to the states to handle crisis and has offered aid involving food, drinking water, shelter among others.

In Syria and Iraq, half the EU’s aid has been focused on life saving medical assistance, vaccinations of children. While in Lebanon, the European Commission is trying to provide shelter and access to food, water and basic sanitation. In Jordan, the Commission is helping the most vulnerable and offering cash assistance. It has helped setup health and wash facilitates. With support of the EU, UNICEF is trying to help the families meet basic child needs.

In Turkey, the Commission is focusing on refugees living outside camps. The Commission is offering help for food and other emergencies and is trying to provide children access to quality education. Additionally, the EU is setting up Refugee Facility for Turkey, a legal framework that provides complimentary support to Syrian refuges and communities in Turkey. The facility plans to provide grants and other financial support.

While both Turkey and the EU are working together to help the refugees and provide humanitarian aid, the inflow from Syria is not helping. It’s raising issues of new rehabilitation and testing the already stressed refugee camps and programs. Recently intensified operations in Syria by the Syrian government and Russian forces are one such phase of the ongoing conflict.

These operations have led to huge number of people fleeing the region. These people are seeking shelter in neighbouring countries and have sought entry in Turkey from the Oncupinar border crossing but the country kept it closed. In response, the EU has asked the country to keep its borders open whose borders are itself under pressure.

The problem is expected to worsen in the near future, with number of Syrians displaced and stranded at Turkish border to rise from 35,000 to 70,000. In the midst of this crisis, the EU is engaging with Turkey to stem the flow of migrants at former’s own border and pushing for help from Turkey by opening Turkey’s border to the concerned migrants. In order to facilitate this, the EU approved €3bn to Turkey to handle and support the inflow.

EU foreign ministers are also engaging with Balkan states to reduce the inflow of migrants. In a similar effort, the EU has asked Greece to implement full border control with Turkey to safeguard the Schengen Area. For Greece, the inflow has been overwhelming which had around 850,000 people last year while the country has capacity to provide shelter for just 10,000 people.

Greece’s ability to control the influx seems to be limited and as a result the EU is seeking help from Macedonia and may need to reach out to Bulgaria. As a backup plan, the EU may have to allow member states to extend border controls for up to 2 years.

EU member states, like Hungary, took strict actions against the refugee crisis which involved the closure of main land routes of arrivals. Similar calls have been made in Greece for building a fence along the county’s northern border. Other countries, including Austria, have shown disappointment at the EU’s handling of situation and stressed that any failure to handle situation themselves would require support and co-operation with Slovenia, Croatia, Serbia and Macedonia.

Macedonia is already working on that and has deployed army on its borders to decrease illegal crossings.

In short, refugees do not only need medical assistance, shelter and food but rather a long-term solution to resolve the issue and make efforts to reduce the displacement by limiting violence and its impact on civilians in addition to providing aid within Syria itself.