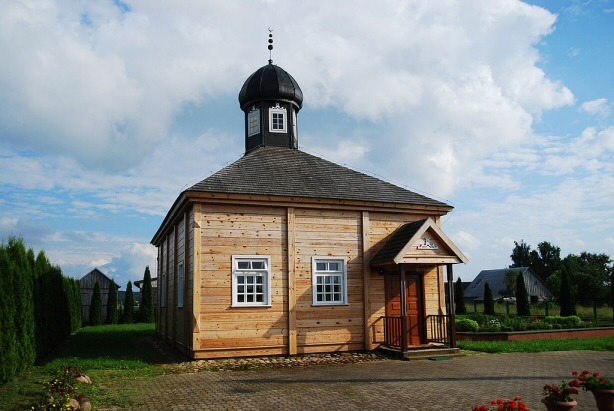 In the history of Poland there are just a few sources about Tatars. Polish Tatars came to Poland in the 14th century to be mercenaries upon the invitation of the king of Poland. 600 years ago they began to migrate to Poland in the time of the great Lithuanian kingdom, escaping from the Golden Horde or from captivity in Lithuania.

Although they had different fighting tactics than the Polish soldiers, they were quickly accepted by the Polish because of their ability shown in the battlefields. And even some Tatars rose to the level of commander in the army and sometimes they were rewarded with land because of their victory. They became a highly respected nation by the Polish people because they fought very well in the Battle of Grunewald (one of the greatest wars of medieval European history), in the 1410s.

96% of the Tatars living in Poland are Polish and 94% belong to the Catholic Church. Nevertheless, they created a small area (of about 150 km², consisting of Białystok, Krynki, Sokółka, Bohoniki, Kruszyniany, Krynki and Supraśl) where different cultures and religions live together. Even this region is called Tatar Road (Szlak Tatarski) in Poland. The Polish Tatars living in these regions are generally named as Lipka Tatars, Polish Tatars, Lipkowie or Muslims. The first Tatars came to Poland were soldiers, but Tatar soldiers began marrying Polish young girls and lost their mother tongue completely by the 16th century. Therefore, Polish Tatars living today, we can say a mixture of both nations. Although they have forgotten their ancient language, they have been able to maintain their religion for 600 years. The Polish Tatars say they are very good at adapting to Polish culture without losing their own culture and religion. In the north-eastern village of Bohoniki, there is a historical mosque dating from the 18th century. This mosque is not only a symbol for about 1,500 to 5,000 Tatars living in Poland, but also a source of pride. Unfortunately, there is no clear information on the number of Tatars living in Poland. After Poland’s accession to the European Union, Muslim minorities in Poland were given the freedom to choose their own muftis. Tatar minority is now an important group of people who shaped the history of Poland.