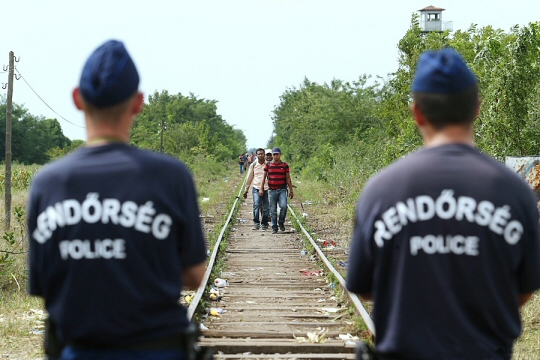 Populism has always been there, but its rise has explicitly advanced lately around the world, Hungary being no exception. Populist leaders are gaining support and an increasing number of populist parties are obtaining votes, securing parliamentary seats and entering government coalitions as well as emerging as an active opposition. What does populism mean? Is there a certain widely accepted definition and explanation? Not really. Media usually refers to the term as the expression of anti-establishment and anti-elite sentiments when in academic pieces, populism often describes different political movements, ideologies and political contexts. While there are its different forms, most widely known are exclusionary and inclusionary forms making it a tool utilisable for diverse purposes. We can also differentiate “right and left wing” populist leaders, Hungarian Prime Minister belonging to the first category with his open disavowal of liberalism. I would like to focus specifically on the twist of populism and minority rights.

Hungary is explicitly a country harshly experiencing the migration crisis with exclusionary forms of populism simultaneously being on the rise. Similar cases occur not only in Europe, but all over the world-minorities, immigrants and other vulnerable groups being targeted. Yet, living in Eastern Europe makes me focus more on migrants, indigenous people, ethnic and religious minorities facing challenges on daily bases. I strongly believe we indeed face the clash of civilisations respectively of Samuel P. Huntington, who spread the idea in 1996 and I slowly tend to be more convinced that we do face conflicts, discrimination and breach of human rights because of, in some cases, lack of understanding and in others, lack of respecting each other’s cultural and religious identities. Furthermore, we do need to open our eyes and face reality and turn to actual measures rather than expressions of “To be”. Even after years and years of fighting for more democracy, more freedom, more rights and power to people and not the government, politics, in number of countries, is closed to the public in a sense of directing and acting as it is the “invisible team and power” influencing society. When it comes to minority groups, reality is much worse, the doors being closed to the ones vulnerable, to the ones most in need.

It is essential to mention few examples of Hungarian government’s tough stance and unwelcoming attitude, manifested though diverse speeches, anti-migrant laws and though building fences along the borders. Viktor Orbán described the arrival of migrants in Europe as “a poison” claiming no necessity of “a single migrant” for the country to have a future. According to Eurostat, Hungary was at the top of the chart unifying asylum applications per 100,000 local population in 2015 and leading with the number of 1799 followed by Sweden and Austria. In addition, it was on September 14, 2015, when the country closed the last remaining hole in the 175-kilometer (109 mile) fence, that has been built along the southern border to Serbia, one of the final stations on the Western Balkan route to Europe representing the focal point for tens of thousands of refugees making their way from Syria, Iraq, Afghanistan and North Africa. It is also essential to mention that Hungary’s closure of its border with Serbia has led to confusion and desperation among refugees who had hoped to cross into Europe. Serious breach of human rights took place in 2015 September, when refugee arrival in the town of Röszke, on the Hungarian border to Serbia, was handled with police wearing face masks and rubber gloves as they herded together thousands of new arrivals into registration camps. The facilities had tents without rain protection, a lack of blankets, little food and medicines.

As a result of a number of steps taken to spread the nationalistic atmosphere all around, Hungary has been seeking for more freedom of choice and decision on national level, independently from the EU, which happen to be occurring in line with the Brexit talks. Country’s long-standing position of reinforcing the ‘so-called protection’ of Europe’s external borders and restoring law and order along the EU’s border zones is playing a significant role according government spokesperson Zoltán Kovács present at the EU summit in Malta in February this year: “Although the Hungarian government doesn’t like the border security fence either, it has proven to be effective, because it is capable of stopping, or at least slowing illegal immigration.”

Proven above, Hungary’s stance on the topic of minorities, specifically migrants and refugees, has been strict and pessimistic during these years. Based on the regulations, actions carried out and speeches given, social inclusion and softer politics are less likely predictable in near future as the Visegrad group countries share similar attitude towards the topic. But a logical question follows the present situation, why democratic and inclusionary forms of populism fail to manifest in Hungary and provide mutual platform bringing together diverse identities for cultural and political dialogue. Possible answers could be fear of sharing the power, fear of bringing out the need for change, the need for giving up on something to find common ground for carrying out actions. What concerns me the most is finding the border to what extend minorities rights could be limited (migrants, refugees). However, what could clearly contribute I consider to be an increased role of international, supranational organisations and transnational actors in addition with raising awareness about the risks and benefits of supporting two widely known forms of populism. Equally essential step is diving into more intercultural dialogues, peace-building and finding effective solutions within not only governmental, but also on-societal levels.

Today’s trend of growing populism and an increasing lack of respect for minorities, however not being an easy task, could indeed be shifted towards more inclusive form of populism, which, in my opinion, would reduce ongoing tensions benefitting more reasonable solutions for current challenges.