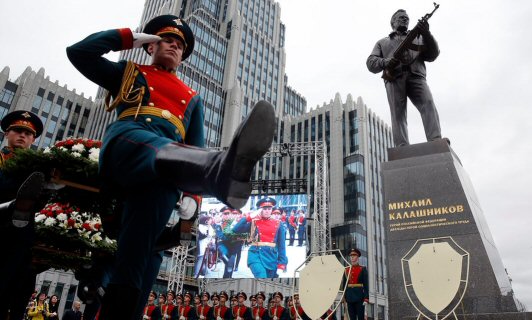 In memoriam to Mikhail Kalashnikov

A towering monument to Mikhail Kalashnikov, designer of the AK-47, the Soviet rifle that has become the world’s most lethal and widespread assault weapon ever made, was unveiled by Russian officials and Orthodox priests on 19th of September, 2017 in the middle of one of central Moscow’s busiest thoroughfares. In his speech during the ceremony, the Russian Culture Minister Vladimir Medinsky praised the gun designer as the embodiment of all that was good in Russia and has said that the Kalashnikov rifle is a “true cultural brand of Russia”.

The seven meters tall bronze statue, which has been blessed with the holy water, depicts General Kalashnikov, who died in 2013 at age 94, looking into the distance and cradling one of his automatics in his arms. On the pedestal there is a quote from Kalashnikov, saying “I created a weapon for the defence of my fatherland”. Mikhail Kalashnikov – an offspring of a large peasant family – started working on a new automatic firearm for the Soviet Red Army after he was wounded during the World War Two. The AK-47 combined the portability of machine pistols popular in WWII with the precision of less portable, sharpshooting weapons and the firepower of earlier, heavier machine guns.

Unfortunately, it must be mentioned that tribute to Kalashnikov was not without a spectacular incident. The arms experts have noticed the mistake in the monument: the etching on the plinth was not of the AK-47, but the StG 44 rifle, which was used by the Nazis during the WWII. The sculptor’s mistake left the Russian authorities with no choice, but to use the grinder and remove the offending picture.

Every fifth firearm in the world is a Kalashnikov and more than 70 million of the assault rifles have been produced over the past 60 years. As well as being embraced by the armies, the relatively cheap and sturdy rifle has been used by gangsters, drug traffickers, militants and rebels.

A fact sheet distributed at the ceremony by the Military-Historical Society described General Kalashnikov as “one of the most famous Russians in the world and his invention, the Kalashnikov rifle, is depicted on the national emblems of Mozambique, Zimbabwe, East Timor and likewise on the national flag of Mozambique”. However, it is worth noting, that, according to the military experts, the AK-47 has killed more people than all other types of modern weapons taken together.

Even though, the erection of a monument to the gun-maker can raise some confused feelings, but such a decision clearly demonstrates the surge of nationalistic pride under Putin that has been seen through Kremlin’s glorification of military achievements of the Soviet period, while, at the same time, ignoring the gross abuses.