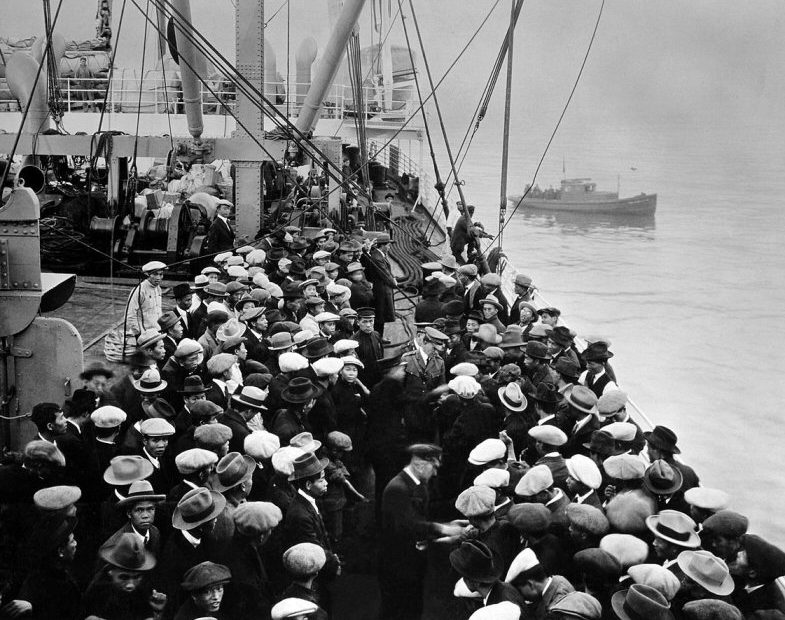 Is migration a new phenomenon?

International migration is usually shown in a bad light. We can see everyday on the news or on the internet some negative information about illegal border crossing, economic migrants or asylum seekers. Mass media, however, started exploring this topic mainly in 2015, when Europe experienced the massive influx of Syrian refugees. Therefore, many think that international migration is something that only began in 2015. In this article, we will try to prove wrong using historical evidence of mass movements of people and our aim will be to show that migration is not only a phenomenon of the 21st century.

For most of history, migration has been a part of everyday life. Territory was shared or borrowed and people moved cyclically for various reasons, whether it was hunting, a conquest or searching for better economic opportunities. We have to keep in mind that the world became populated by migration. In early history, nomadism was part of everyday life.  We have evidence of spread of homo erectus out of East Africa about 2 million years ago, who consequently colonized large areas of Africa and established settlements in the Middle East, the Caucasus and South China. World’s history is also filled with religious exoduses as well – we cannot forget to mention the story of Moses who led his people through Egypt’s mountains Sinai into Canaan. The other historic famous examples of mass migration are the Vikings from Northern Europe and Haan from China who both established large territories built on migration, or Roman Empire which was seen as a melting pot of different nationalities. When thinking about history, it might be useful to imagine a world’s map, for example a thousand years ago – Spain was inhabited my Muslims, Southern Ukraine by Turks and the Americas only by natives. To sum up, migration was seen as a basic need, not as something barbaric, as it is today.

The Industrial Revolution in Europe in the 19th century was accompanied by free movement of trade, capital and eventually, by human movement. At this era, migration was spread rapidly due the significant decrease of travel price and due to the developments in transportation technology. Suddenly, even the poor were able to afford to buy a train or a boat ticket to their new harbour of hope. Global markets were developing and so did long distance migration. In this context, the late 19th century is best known for the Transatlantic migration – between 1846 and 1940 around 55–58 million moved to the Americas. Up to the mid 19th century, the Transatlantic movement was mostly dominated by British, Irish, Germans and Scandinavians and from 1960 by Russians, Italianans, Jews and Mexicans. Many moved for the dream of becoming independent farmers or traders in the new land of opportunity and many moved because of the catastrophic series of harvests – the most famous is the potato famine, also called the Irish exodus. However, this is not the only mass migration we might have seen in the late 19th century. Over 46–51 million people left Northeastern Asia and Russia for Manchuria, Central Asia and Japan. Over the same period of time, around 48–52 million people left India and Southern China for rice and rubber plantations in Southeast Asia and The South Pacific. Many worked as indentured labourers. They were poor migrants who voluntarily signed to work at these plantations for a fixed period of time. They either received a small wage or no wage at all because of a deal they made with the captain of the boat who would not charge money for their journey. After their arrival to the destination, they were sold and had to work 3 years to pay for their way, after which they became free. This system was deployed in 40 countries at that time.

With the outbreak of World War I, all the countries began to impose drastic restrictions on movement. Flows in goods and capital were still encouraged, but controls on human movement were strengthened. World War II produced millions of refugees – it is estimated that by the end of the war, around 30 million people were outside of their countries of origin. Therefore, the United Nations with its subsequent organizations were created to deal with these displaced people. Suffering two world wars, migrants, war refugees and asylum seekers have become the new face of migration, whereas the old principle of free migration was long gone and the new xenophobic aspects combined with the fear of losing sovereignty came to the surface.

To sum up, migration is not a new phenomenon as many may think, but the restrictions generated by World War I are. We provided much historically proven evidence from the earliest migration we know of until recent history and we believe that there are solid historic, moral and economic grounds for arguing that migration can bring a drastic improvement – let’s just all look at the US, the country which was purely built on migration of rich as well as of poor, desperate and uneducated people, and yet managed to become rich and powerful country. That could be the future of other countries as well if they support migration more.