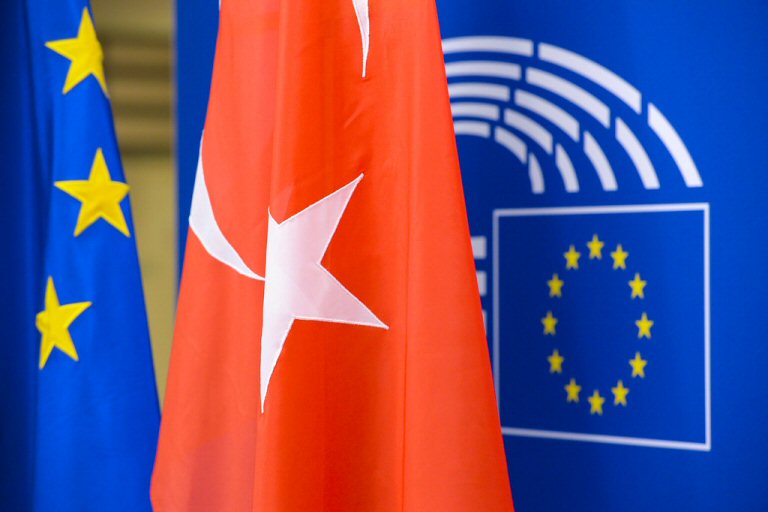 Is Turkey still on the way to Europe?

The relationship between Turkey and the European Union have been influenced recently by the changes in regional and global politics and resulted in various positive and negative consequences. Although due to migration, regional security concerns and close economic ties create new areas for cooperation; political discourses in domestic politics, the rise of the extreme right in Europe and the changes in both of the EU and Turkey’s future prospects cause a threat of strain in the relationship of the EU and its south-eastern neighbour. None of the partners wish to break-off the relationships because of the existing partnership in trade and the sui generis characteristics of Turkey, nevertheless the perspective of a political integration do not exist for both sides either.

Turkey turned its face to the West since the proclamation of the republic and has regarded the EU as a role-model on its way to modernisation. For this reason Turkey began its European adventure by applying the European Economic Community shortly after its establishment. As the first step in the process that aims full membership the Ankara Treaty was signed in 1963. The harmonisation process then began with the Additional Protocol. With a decision made in 1995, a customs union has established in 1996 by taking an important step towards integration. The following step was the start of membership negotiations in 2005. In the process up to the present, both sides have entered a process that can be called fluctuated, and the reforms and cooperation have continued at different levels. In 2016 relations with the EU were followed by ups and downs in response to the opportunities and threats that Turkey faced.

The large increase in international migration in recent years has become a problem that transcends nation states. As a response attempt the EU signed return and readmission agreements with 17 countries to resolve the problem caused by irregular migration. The Readmission Agreement made between the EU and Turkey on 13 December 2013 and the Joint Action Plan was prepared on 18 March 2016 for this purpose. The refugee crisis made Turkey a country of a key importance for the EU because of the reception of three and a half million refugees: it became one of the countries that host the largest number of migrant population and located in the transit route of migration from the Middle East to Europe. The cooperation in this area can be considered as an opportunity for the beginning of new negotiation chapters and an opportunity for visa liberalisation. Indeed, during the preparation process, European Council President Donald Tusk, European Commission President Jean-Claude Junker and – after two and a half years – German Chancellor Angela Merkel visited Turkey, which meetings were followed by other high-level visits from Ankara to Brussels. According to German hopes, these visits were considered as opportunities to maintain relations and create policies together.

Visa liberalisation, which came up with the readmission agreement, is also an opportunity for the development of the relationship between Turkey and the European Union. Turkey already participates in various EU programmes that includes mobility of people – such as the Erasmus+ Programme of the European Commission. It can be expected that visa liberalisation will increase mobility and make it easier for various communities to encounter and establish tighter relations with each other.

Regarding security, Turkey is the one of the most important partners of the EU. The significance of Turkey comes from its geopolitical situation and the NATO membership as well as the support that Ankara provides to the Common Security and Defence Policy. This importance has provided Turkey to take part in forming the security policy of the EU. One of the most crucial issues that can strain relations in this field is the mutual accusations of supporting terrorism. Turkey accuses the EU that it is helping Kurdish militant organisations such as the Kurdistan Workers’ Party (PKK) and the People’s Protection Units (YPG).

Turkey and the EU are also cooperating in the energy field and has already established a High Level Energy Dialogue mechanism for coordination. The EU supplies most of its energy needs from Russia, but it seeks for opportunities for diversifying its portfolio to reduce its dependence on Russia. In addition, the conflict environment in Ukraine leads the EU to look for different solutions in terms of energy supplies. Turkey is a key position for the EU because it is on the energy pathways.

However, it would be a mistake to only to see the relations and future prospects from the EU’s point of view. In the past decade Turkey has lost its enthusiasm on continuing political and legal reforms due to the extensions of the negotiation process. The recent EU accession of Central, Southern and Eastern European countries (especially Cyprus) which began negotiations after Turkey did, created an apprehension in Turkey. Anti-Turkey rhetoric in European public area and from European leaders also caused such disappointment. After the military coup Turkey did not stay indifferent to emerging markets and has started to trade with other countries outside the EU and has turned its face to the Middle East. This has caused the EU to lose its old charm even if EU accession is still a goal.

Currently it is not possible to say that either sides expect Turkish membership in the near future. At the moment only the existing cooperation areas ensure the continuity of relations. It can be said that the EU and Turkish interests are mostly intertwined in the areas of energy, security and economic relations. However, in 2013 when the EU accepted Croatia as a member, its exhaustion of further enlargement had become visible. The European Union also closely cooperates with neighbouring countries outside of the union. The relations with Norway and Liechtenstein under special agreements can be a model for Turkey as well, which may also deepen cooperation on different issues by entering to temporary and permanent international treaties.

Turkey has not achieved the status of a member state despite the long negotiation process, however the intensity of bilateral relations make it necessary for both sides to not to ignore each other. Economic and security-based reasons can give rise in many areas of cooperation, however distrust towards each other in public areas along with the rising populism are obstacles to future political integration. Therefore, the parties need a platform that will make the relations sustainable. It may be in the areas of economy and security where the relations are still intensive. The establishment of dialogue mechanisms in these two areas shall be the best interest of the parties until further political steps are taken on the road leading Turkey to be part of the European family.