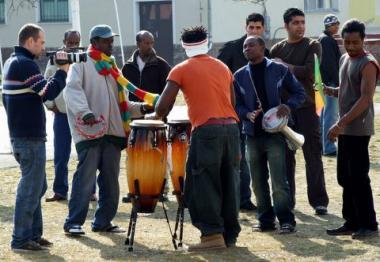 Life of a Refugee – Understanding More

Violence against the ones in need is on the rise, and asylum seekers are no exception. Now that Syria is in the midst of a refugee crisis as a result of the war, the topic receives focused attention. Governments have to deal with an increasing number of illegal migrants and asylum claims while non-governmental and international organizations constantly pressure them to provide better circumstances and faster administration. In such a jungle of different ethnicities, war, authorities, homelessness and fear, refugees have to cope with the horror of being rejected by society and not being able to fit in; they have to face racism and violence. It should not be this way – people’s attitudes towards asylum seekers could be changed through education.

This year the United Nations reports highest level of refugees in the last 20 years after the wave in the nineties which was due to the Yugoslav wars. In 2012, more than 45 million people have fled their homes or have been displaced internally. War remains the number one cause for seeking asylum, with five war-torn countries giving 55 per cent of all refugees: Afghanistan, Sudan, Somalia, Iraq and Syria. A total of about 900,000 claims have been submitted around the globe. Unfortunately the increase in the number of refugees brings unpleasant results to both refugees and governments.

Currently, asylum is not a human right, it has to be claimed and obtained. However, as the crisis is growing, thinkers are encouraging lawmakers to make asylum a basic human right. The problem is that nowadays governments have to face a constantly huge wave of incoming refugees. Among no circumstances a government can keep status quo; but this amount of people seeking asylum is an extremely hard task to cope with. Providing even the worst of circumstances essential for survival can consume tremendous amounts of money. In the current economic situation where most European countries are in debt, refugees are not number one on the list of causes the government would like to spend money on.

Money is not the only hardship. Authorities have to register the illegal incomers while in most cases refugees do not have any identification papers to confirm their name, age and nationality. Having arrived to a country, refugees have to sign themselves off at a local police station, and soon are taken to a refugee camp, which is, at the first stage, usually a closed camp; namely, they are put in detention. Usually, refugees are allowed to keep their children with themselves, therefore children are also kept in detention, triggering one of the most vibrant debates in human rights recently.

For refugees, their whole life depends on the ability to adapt to constantly changing circumstances, while most of them are grieving and shocked after the horror of running away. In a refugee camp, communication is one of the biggest challenges as people come from various cultural backgrounds and most of them do not speak any other language than their own. Imagine a situation where you are locked up with people you have never seen, you do not speak their language and you are completely alone…

The United Nations High Commissioner for Refugees has launched an application for smartphones, My Life as a Refugee. Disguised as a game, this app helps users discover the hardships a refugee has to cope with. The ones who choose to flee have to face death, hunger, loss of family; many do not make it to the border and are killed when they try to escape. In most of the cases the ones planning to escape have to hire a smuggler for thousands of dollars, while there is still a risk of being killed or having an accident – there is no guarantee or insurance. They may lose all that they have: there is no time and space to pack up their dearest and essential things. They may have to leave their families behind and may never see them again. The lucky ones can be reunited years later, far from home.

After the detention, most of asylum seekers are taken to a second refugee camp which is not closed, to the outrage of local citizens. Refugees may not expect a warm welcome when they arrive to the small cities or villages where these camps are located. Citizens are often unfriendly and scared, trying to avoid the unknown. Shopkeepers are more alert of theft; mothers do not allow their children on the streets alone. Segregation begins. After the asylum claims are accepted or denied, the ones who received right to asylum may proceed to start a new life.

I am volunteering for a local mission which helps refugees to integrate in the society. The hardest thing when starting a new life is to get a job so they can afford a room and fulfil their basic needs such as food and education. Sadly, there is not enough staff at the refugee camps to have Hungarian lessons, while speaking Hungarian is essential to be able to get a job later. Most of the refugees I have met have no educational background: typically, a young man from Afghanistan attends elementary school for one year and drops out as he needs to work. After that, there is nothing else to remember but the war.

Based on my experience and personal opinion, as humans, we are obliged to take care of asylum seekers. We cannot turn our backs on problems that are no longer localized to a single state. These are issues that need cooperation and dialogue, even on the grassroots’ level. We can easily catch up with the whole world, we suffer or enjoy the results of whatever happens anywhere on this globe, and therefore we are responsible to help whenever we can. We have to imagine interconnectedness, and it will be easier to understand our rights and obligations as global citizens.