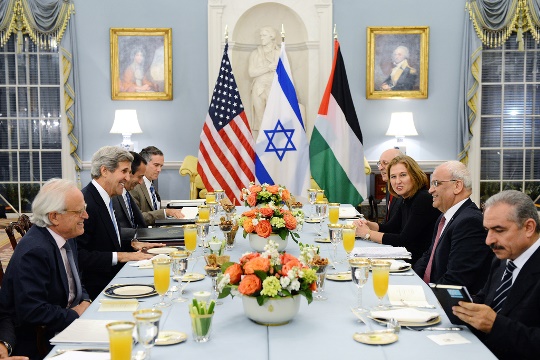 US Secretary of State, John Kerry’s efforts to renew talks between Israel and Palestine have shown some results recently, at least in achieving the two sides’ willingness to negotiate with each other. After a trilateral meeting in Washington in July, the parties sat down for the first session of a 9-month-long talks series in Jerusalem in August. The US would like to see a resolution after the 9 months are over, which would establish two states with clear borders. However the issue of peace-building in the Middle East is rather complicated and holds out little hope. Events and tendencies in the whole region are closely attached to the outcomes of such talks, so that even a superpower like the United States has limited influence on them, as we already know from the numerous attempts for achieving peace throughout the region’s history since 1948.

Negotiations, which began on Wednesday, August 14th, took place amidst a recent military conflict occurring shortly before the talks started off. Rocket fires from the Gaza Strip and an airborne counterattack of the Israeli army overshadow the peace-talks, which seems to be rather a showcase-meeting than a serious and responsible effort of both parties to achieve an enduring settlement concerning the future of their homelands. As a gesture towards the upcoming negotiations Israel released more than two dozen Palestinian prisoners, however at the same time the Jewish state announced plans for new housing in East Jerusalem. The Palestinians consider latter part of the city as their capital and want the Israeli leadership to acknowledge this demand of them. The issue of building Jewish settlements on disputed territory had already stymied talks in 2010, as it is expected to happen the same way this time. Leader of the opposition Labor Party Shelly Yachimovich formulated criticism concerning Prime Minister Benjamin Netanjahu and signified that the leadership should decide whether it would like to reach an agreement or rather thwart any possibilities of a peace settlement. Moreover the United Nations Human Rights Council along with the US State Department expressed concerns in January this year about the growing scale of new Israeli housing units, which violates the sovereignty and rights of Palestinians. The State Department warned both sides to avoid steps, which could undermine the negotiations, but Israel probably reckoned upon the assumption that the release of the prisoners would retain the Palestinian leadership of backing out of the talks even if a new housing plan is on the table. Another aggravating factor of the talks is that Mahmoud Abbas can’t represent the opinion of all Palestinians as the terrorist organization Hamas – which is known for its extremist views – do not acknowledge Israel as a state. Even though John Kerry is hopeful of an agreement, which could contain “reasonable compromises” from both sides, the success of the talks is highly doubtful. The decades-old conflict is not to be resolved easily, however the question is, how deeply the US will exert its influence on the talks, how much it will push either side towards a settlement. From the Palestinian viewpoint an agreement would not necessarily mean a better position for them as they would probably lose support of America and Europe while submerging among other Arab countries, reaching the same fate they did. Additionally there is another serious issue, which can’t be concerted without difficulties. The number of Palestinian refugees, who had fled from their Israeli homes during the Arab-Israeli wars amount to nearly 5 million, whose return is not allowed by Israeli authorities. The anger and resentment of those people and also of Jews, who had suffered from misdeeds of Palestinians can’t be tackled by a single agreement of high level politicians.

Apart from the fact that Abbas has no control over happenings and actions taken by Hamas and other radical groups in the Gaza Strip, statements of the Israeli military spokesman as well as of a senior Palestinian official show a belligerent atmosphere on both sides. The former affirms that the Israeli army will do every step required to safeguard civilians and to fight the terror and its infrastructure in Gaza. On the other hand the Palestinian official – authorized by the leadership to express their official opinion – designated the Israelis as thieves, who steal their land and who disregard international rules and human rights. Netanjahu’s minister Uri Ariel announced that the settlement building will continue, furthermore he added that the current plan is just the first course, which is smaller than the upcoming ones later. According to Dan Shueftan, an expert on Middle East issues, the chance of an agreement is very unlikely, because there is an insuperable abyss between the parties. The Palestinians are currently fondled by the Western world, which means they receive subsidies regularly, however in case of an agreement they would be doomed, such as other Arab countries in the region. Shueftan interprets the parties’ willingness to sit down to negotiate as an act of showing the public and especially Western countries that they don’t want to hinder the talks straightaway. Their inclination to resume dialogue is due to America’s and Europe’s request and is lacking any serious commitment. The Israeli vox populi does not have any confidence in the success of the negotiations, nor does their Prime Minister Netanjahu. Moreover the Israeli people are extremely mistrustful towards the Palestinians, because they consider their population as murders and terrorists. The released Palestinian prisoners had committed serious crimes, which is highly condemned by the Israeli public.

The critical state in the Middle East is possibly an eternal phenomenon, an immensely fragile situation, but still a sort of stability, which operates in accordance with its internal rules. The pressure of superpowers may have an impact on the proceedings in the region, however the US couldn’t foster an agreement up to the present. In my opinion the odds of a settlement are very low and the imbroglio, the tender equilibrium will continue to exist for an indefinitely long time. The efforts of US presidents or ministers to enforce peace between the two nations seem to recur the same way as it happened several times in the past. Apparently the talks are more and more part of a play by pretending willingness to resolve the conflict, than a serious endeavor to reach compromises. In the atmosphere of continuous mutual incrimination and aggression there is little hope for progress in the region.