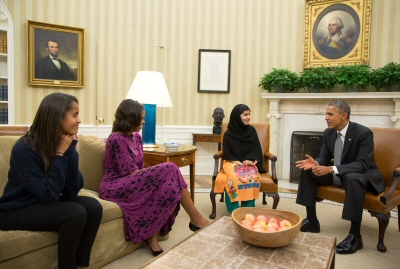 The Pakistani human rights activist girl, Malala Yousafzai, who was shot in head by Taliban soldiers because of her activist pursuits, received the European Union’s Sakharov human rights prize.

In the Islamic state the Taliban strongly insists on the traditions and limits the women’s rights significantly. Malala has become known internationally when the Pakistani army drove out the Taliban armed forces from the neighbourhood of Swat Valley highlands in 2009. The 16 years old Pakistani girl campaigned for the women’s rights writing a blog about her own life anonymously on the internet, in which she revealed how the Taliban regulate the Pakistani women’s life, and how women are banned from education. One year ago a Talib soldier shot the girl in the head, who had been travelling on a bus with her schoolmates.

The human rights prize is named after a Soviet physicist Sakharov and the European Union gives it out every year for a person who fights for human rights and the freedom of thought. Among the prize winners were the South African Nelson Mandela and the Burmese Aung San Suu Kyi. The leader of the European People’s Party, Joseph Daul said: “making a better future depends on young people such as Malala”. The Pakistani girl also got an opportunity to speak at the United Nations General Assembly where she vowed she would never give up on the fight for the Pakistan women’s rights.

In Pakistan – as in the rest of the Islamic states – there is basically no such thing as women’s rights. In the life of the country’s female members the only transitional improvement was the government of Benazir Bhutto – the only female president so far –, who tried to modernize the country through her democratic political notion, effecting a change in the women’s situation. The political system tried to oppress the women again following the woman politician’s tragic death. It is notable that the country’s female activists – even at the price of their life – are willing to speak against the male-oriented society insisting on Islamic traditions, and they persistently struggle for the acknowledgement of their rights.