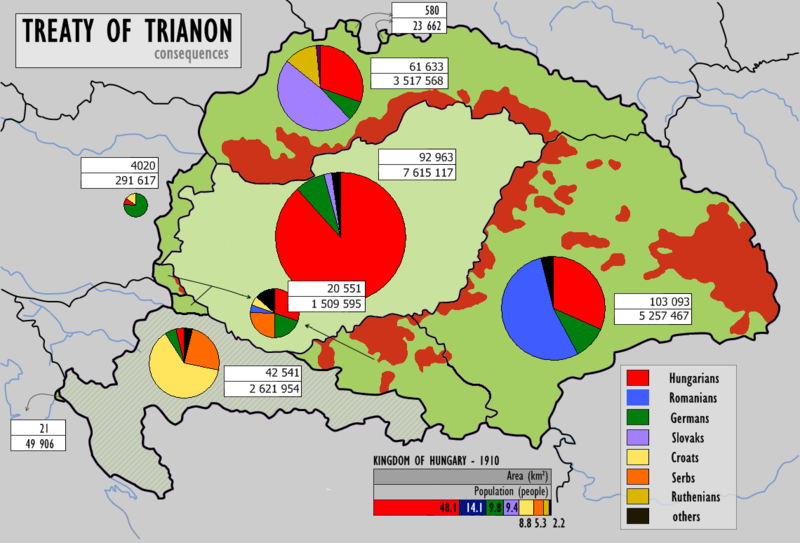 Trianon after 100 years: To mourn is to be Hungarian?

“Trianon was unrighteous and is the biggest tragedy of Hungary; those who feel sadness, pain and anguish towards Trianon are Hungarians; romantic nostalgia towards Hungarians on the other side of the border”: these are the prevalent beliefs and feelings shared by the Hungarian general public concerning the Treaty of Trianon, 1920, according to a recent research. The sentiments felt by the Hungarian general public concerning the treaty on the centenary of the treaty are clear-cut, yet, most Hungarians have an insufficient knowledge about the technical details. Despite the evident controversy this sparks, the findings have massive implications on how one perceives Hungarian identity.

The aforementioned lack of sufficient historical knowledge among the public results, on one hand, in failure to objectively assess the roles of actors in Trianon; France, leftist politicians, the Soviet Republic of Hungary (also known as the Republic of Councils in Hungary), even freemasonry are widely blamed, yet Hungarian national endeavours or the role of Hungarian politicians are barely mentioned. These beliefs are arguably not devoid of political connotations. Although Hungarians, according to this particular paper, tend to think that the topic has lost its salience and is used for gaining political leverage nowadays, it is rather interesting that the left remains disdained for attempting to deprive those having to live under a non-Hungarian citizenship from dual citizenship. Both the historical and therefore the current left has seemingly remained locked in a pro-Trianon narrative, one they struggle to get rid of and comes back haunting them from time to time. This is undoubtedly the influence of the current Hungarian regime, but it also highlights how relevant Trianon is in partisan politics, even after 100 years.

However, there is a bigger picture. The vast majority of people claim that the treaty was unrighteous and unreasonable, while only 1% (and still less than 10% if we are being concessive) is aware of the exact figures concerning the loss of territory, the loss of population, and the proportion of nationalities on the territory of ‘historical’ (pre-1920) Hungary. Empirical evidence therefore tells us that there must be some deeper phenomenon behind these sentiments: Hungarians often emphasise the series of unfortunate events from Mohács to the Turkish occupation and to the handful of unsuccessful revolutions and failed military campaigns that characterise their history. Loss, suffering and demise has been so prevalent in Hungarian history that it became an essential characteristic of the national identity, and Trianon fits perfectly in this puzzle. The fact that most people, according to empirical data, are not aware of what lies behind the tradition of sadness and pain they inherit from their ancestors and yet they still continue to reconstruct it tells us that Trianon has become an inalienable part of Hungarian identity and it is being constructed and reconstructed consistently since the treaty was signed.

And perhaps this is exactly what hinders social and political progress in Hungary. Living in the narrative of historical “what ifs” and blame-shifting creates unfavourable conditions for positive change and thus predestines the country for a stalling, backward-facing trajectory. Maybe it is time Hungarians reassess their stance towards national tragedies such as Trianon by getting educated on the topic and creating a platform for appropriate discussion, thus reconceptualising what Hungarian identity entails in the increasingly globalised and modern world of the 21th century.