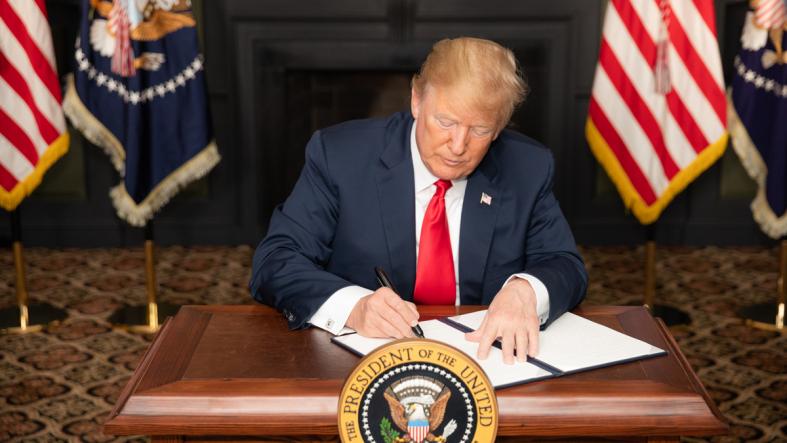 US sanctions against Iran: a war without winner

US President Donald Trump restored some sanctions to Iran by an executive order in 2018, saying that the policy of USA is to impose “maximum economic pressure to Iran.” This executive order comes after three months of President Trump’s withdrawal from the nuclear agreement. In this way, the sanctions imposed by the US administration on Iran have drastically restricted the ability of this state to finance the import of medicines.

This has affected the rights of Iranian residents to the access to health care. Restrictions created by financial transactions have culminated in aggressive rhetoric by US officials, severely shaking up the Iranian economy and further weakening the health sector. The US government has made some exceptions in humanitarian aid, however, in fact these have not been implemented. Companies registered in the United States and Europe have been hesitated to cooperate with Iranian authorities.

As the result of this policy, Iranians have not gained anything in terms of drugs or health care. In the period between November 2018 and October 2019 Human Rights Watch interviewed 21 people, including Iranian medical professionals, former employees of drug importing companies as well as lawyers of the challenges of humanitarian operations in Iran. This report concluded that US economic sanctions are causing unnecessary suffering for Iranian citizens affected by a range of diseases.

Among the most affected Iranians are those who need to be treated with specialised programs, such as patients with leukaemia, epilepsy or chronic eye injuries, as a result of exposure to chemical weapons during the Iran-Iraq war. The US Treasury Department had predicted that the sanctions would result in financial isolation and maximum pressure through the sanctions aim to inflict pain on the Iranian people so they can demand a change in the government’s approach.

The overthrow of the Iranian government is not an officially proclaimed goal of the sanctions. But statements by US security adviser John Bolton suggest that Iran’s destabilisation and a regime change in Tehran would be desirable. Under international law, a state or coalition of states applying economic sanctions should consider the impact of these measures on the rights of affected persons, in particular access to food and medicine.

So, the first US sanction against Iran were imposed by President Carter in November 1979, by executive order 12170. After that a group of radical students seized the American embassy and took hostage the people inside in Tehran after the US permitted the exiled Shah of Iran to enter the US for medical treatment. Iran produces 97% of its medicines locally but a third of these drugs are made with active ingredients that are imported according to the head if Iran’s Food and Medicine Organisation.

The majority of medicines used to treat rare and chronic diseases, as well as multiple forms of cancers, are part of the three percent of essential medicines that Iran need to import. Medical cost could rise even further if oil revenues, which sustain Iran’s currency and economy continue to fall. For Iranians who cannot afford to buy foreign medication, the only option is to use the local equivalent covered by Iran national health insurance.

In order to fill the gap left by foreign pharmaceutical products, the Ministry of Health increased the production of local medicines, however the quality of those are not the same. These sanctions imposed by the USA have severely damaged the Iranian economy. The US government has put forward 21 demands that must be met in order to reduce sanctions of Iran. In doing so, they are pressuring the Iranian government to surrender its missile program.

Also, they say that the Iranian government should not support terrorist groups and withdraw military troops from Syria and demand the mobilisation of Shiite militias in Iraq. So, through the statements by the US government, also the Secretary of State’s Department has made it clear that through these sanctions they want to overthrow the Iranian government. The overthrow of the regime in Iran is one of the main goals of the US government over the years.

The one-side departure from US nuclear deal is undoubtedly a strategic departure, in order to achieve their goal, to overthrow the government and to have a nuclear weapons program in hand. After leaving the agreement, the US imposed very severe sanctions on the Iranian economy, aiming to destroy Iran economically, so Tehran would no longer survive without Washington’s help.

The question naturally arises as to whether US-Iranian relations are moving towards a diplomatic solution or war? In my opinion opportunities for lowering tensions between the USA and Iran seem increasingly remote as personal threats and insults between the two governments are already increasing. I would call this relation as a war without winner because we can clearly identify four reasons why the US cannot attack Iran. Firstly, from the spectacular US failure in the Iraq-Afghanistan war, secondly, the lack of European allies as participants in a possible coalition between them. Thirdly, the American public is against a new front of war. And finally, the USA may not suffer direct damage from this war, but its regional allies would be under the stroke of Iranian weapons.