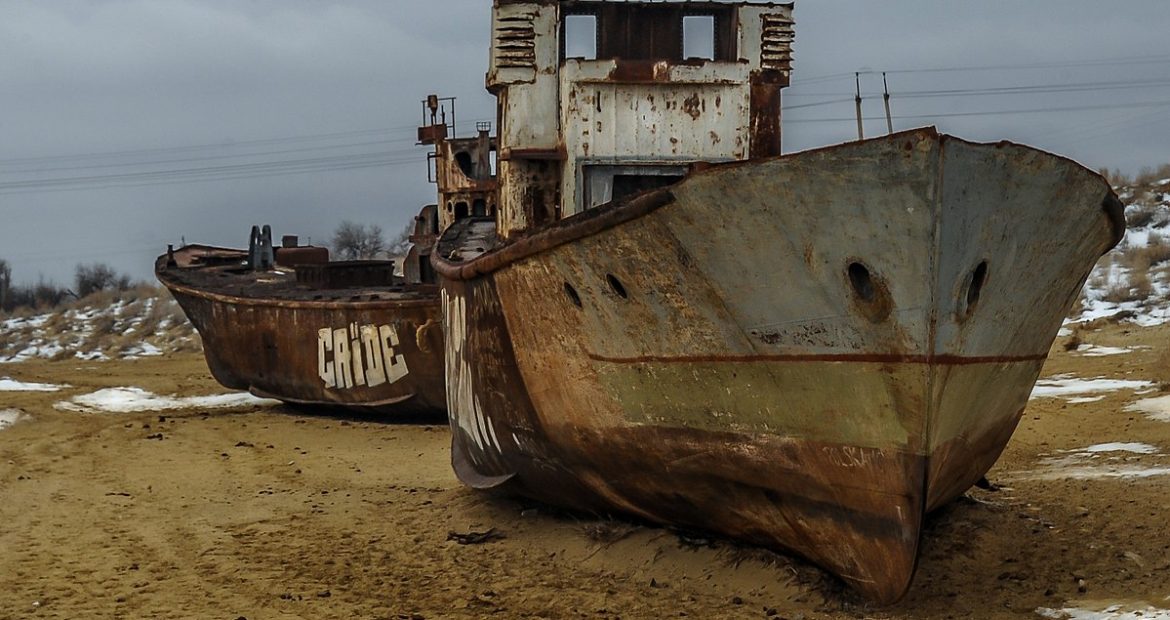 The Aral Sea crisis: Efforts to revive affected regions in Kazakhstan and Uzbekistan

The Aral Sea, which is located between Kazakhstan and Uzbekistan, was once the world’s fourth largest saltwater lake. In the 1960s, however, Soviet authorities decided to implement a new irrigation policy to boost the region’s agricultural output. The policy called for the Aral Sea to be diverted from its two primary river sources, the Amu Darya and the Syr Darya, so that the the water flow could be channeled to farms and plantations throughout Kazakhstan and Uzbekistan.

The loss of water flow from the Amu Darya and the Syr Darya, compounded by a surge in the use of salt and chemical fertilizers for agricultural purposes, proved disastrous for the Aral Sea region. The Aral Sea began to rapidly dry up over the course of the ensuing decades. Today, the body of water has split into the North Aral Sea in Kazakhstan and the South Aral Sea in Uzbekistan and constitutes just 10% of its original area.

From a purely environmental standpoint, the desertification of the Aral Sea constitutes nothing less than a catastrophe. It has also had a devastating impact on the health and economic livelihoods of the people who live in this region. That being said, not all hope is lost. Despite the immense challenges caused by the shrinking of the Aral Sea, multiple local and international initiatives have been set up to prevent further water loss and restore the well-being of the communities that call this area their home.

Overall, the future of Kazakhstan’s North Aral Sea appears hopeful, largely owing to a World Bank-funded $87 million restoration project that was completed in 2005. The project included the construction of the Korakol Dam, which resulted in an exponential increase in the North Aral Sea’s water levels: the dam helped raise sea levels by 4 meters and increased water volume by 50%.

As a result of the Korakol Dam’s success, fish stocks have been reintroduced to the North Aral Sea, and local residents have been able to reestablish the fishing industry. In 2006, the total fish catch was 1,360 tons, whereas that figure jumped to 7,106 tons in 2016. In addition, the diversity of fish species living in the sea increased during that same time period. The growth of the fishing industry has allowed locals to pursue more lucrative jobs and has attracted new residents to the surrounding communities.

The World Bank and the Kazakh government have discussed the possibility of building an additional dam to further increase water levels, which could provide expanded commercial fishing opportunities. In the meantime, people living by the North Aral Sea will continue to benefit from the economic boom that has resulted from the revitalization of the fishing industry.

The prospects of restoring Uzbekistan’s South Aral Sea are less optimistic compared to its northern counterpart, as its eastern basin completely dried up in 2014. Therefore, initiatives dedicated to alleviating the situation in the South Aral Sea region must come up with innovative proposals to achieve substantial progress on the issue.

One potential solution involves transforming the biome of the region by planting trees and vegetation on a large-scale basis. For example, the United Nations Development Programme (UNDP)’s Green Aral Sea Initiative aims to turn the dried-up areas of the South Aral Sea basin into a forest by planting 100 hectares of saxaul trees in the area. In addition, Uzbek scientists have been involved with international efforts to promote the widespread growth of various plant species near the South Aral Sea. One recent collaboration with a team of Chinese scientists established a “nursery garden” to identify which plant species thrived in the local environment and how they could benefit a potential ecological metamorphosis of the region.

The creation of a “green” South Aral Sea offers the potential to benefit the environment and create more sustainable opportunities for the local population. Since these projects are still in the early stages of development, it may still take time to observe the full impact of the proposal. Nevertheless, it offers a promising means to give new life to the region and create a better future for its inhabitants.

Although the damage caused by the desertification of the Aral Sea will never be completely undone, the initiatives detailed in this article offer pioneering solutions to reinvigorate the Kazakh and Uzbek communities that have been most heavily affected by this phenomenon.